Ahmad Jamal at the Colonial Theatre 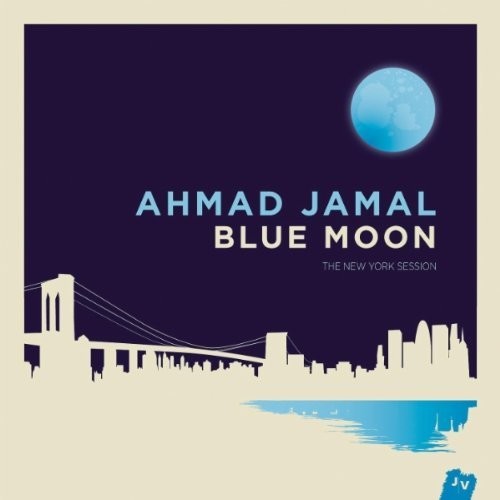 The latest CD is being praised as a masterpiece. 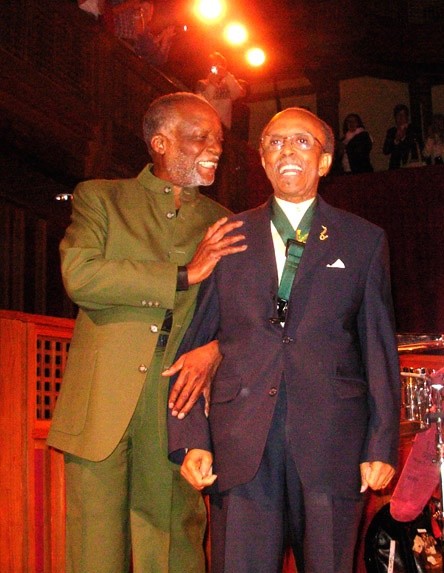 Ahmad Jamal with Jimmy Heath at the Tanglewood Jazz Festival in 2007. Giuliano photos. 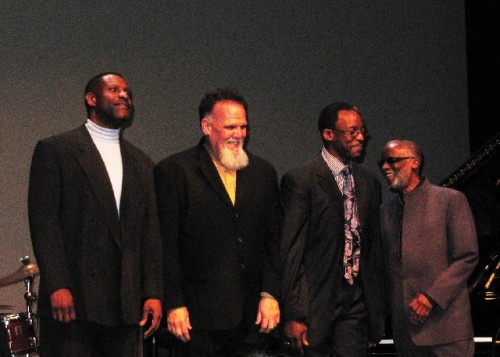 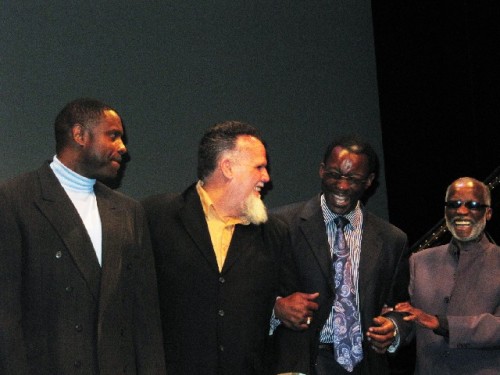 The group sharing a bow. 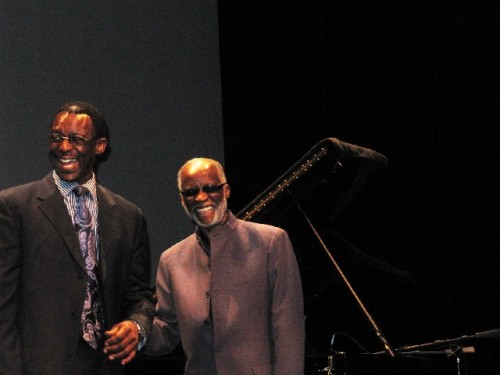 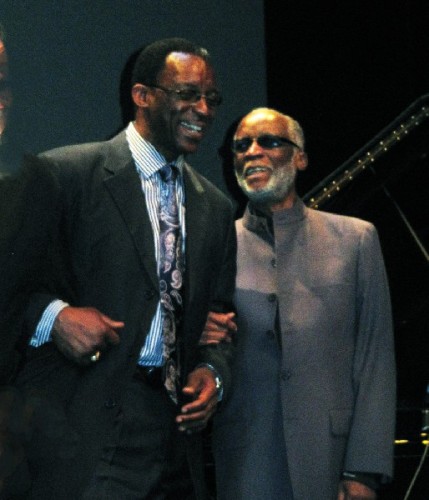 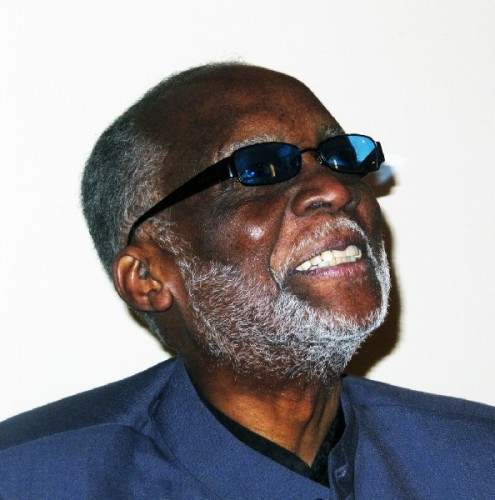 Jamal greeting his fans after the concert.

The recently released CD Blue Moon is being hailed by critics as one of his best of dozens and arguably a masterpiece.

Its music was the focus last night of a spellbinding performance at the Colonial Theatre in Pittsfield. He has recently taken up residence in the Berkshires. Hopefully the Colonial will become a second home.

Following this performance he and his quartet -Herlin Riley, drums, Manolo Badrena, percussion, and Reginald Veal, bass- depart for Italy to launch a European tour to support the launch of this well received release.

After the concert Jamal greeted fans and signed CDs. It was the most successful such event we have witnessed at the Colonial.

“We are very pleased with the ticket sales for this event” commented Simon Shaw who books talent for the Colonial Theatre. In the past he has discussed with me the difficulty of presenting top level jazz performers. The best known artists are expensive and the music appeals to a niche audience. “Ahmad Jamal is an iconic artist. We would not have been able to do this without significant support.”

He evaded identifying the source of patronage. The concert drew some 500 of a possible 750. Two hundred of those seats are in the top balcony, which rarely sell out. Looking about us the orchestra was full.

And enthusiastic. No. Make that reverential.

The gossamer touch and rhythmic infectiousness of the music induces a titubating, meditative state. There is often a surreal, dream like evocation. One might aptly describe it as the musical equivalent of a religious experience.

Like many fans of his music my interest began with the purchase of Live at the Pershing in 1958. It included his best known composition “Poinciana” with its catchy, infectious rhythmic accents and changes. He saved it as one of two encores last night. When the audience recognized the tune he turned to us with waving gestures that urged even more applause.

His recording career started in 1955 with Ahmad’s Best. Since then he has never looked back in a career that is still going strong.

There was a bit of hesitation as he made his way about the stage, what the heck the man is in his eighties, but there was no evidence of age in his masterly command of the piano.

His approach evokes another convert to Islam, Muhammad Ali. Like the renowned boxer at the keyboard he “floats like a butterfly and stings like a bee.” It was news when Jamal adopted a Muslim name in 1952. We have come a long way since then.

Jamal’s last visit to the Berkshires was headlining the Tanglewood Jazz Festival in 2007.

Through the decades a signature of Jamal’s approach has been an exquisite sense of touch that explores the full range of approaches to the keyboard from soft and feathering to bold, strong clusters of chords. Few pianists match his command of dynamics. Peers would be Bill Evans and George Shearing. He conflates with the most lyrical end of jazz pianists which is what attracted Miles Davis and influenced his interpretation of ballads.

Jamal brings a particularly lyrical invention to standards like the centerpiece “Blue Moon” on the current CD. We delighted in recognizing a very stretched out version of the Johnny Mercer tune "Laura" from the Otto Preminger film. Another tune gleaned from a Sammy Davis, Jr. film was “This is the Life.” He also introduced a jazz standard by Dizzy Gillespie “Woody ‘n’ You.”

On stage at the Colonial he proved to be charming, charismatic, and whimsical. The piano was set at an oblique angle. He was turned away from the musicians and his back was to the audience. The setting did allow us to see his long, slender and remarkably fluid fingers dancing over the keyboard.

He would occasionally turn to his bass player and drummer with hand signals, for tempo changes. There were often tricky elements. Like a plane dropping down for a landing the music would diminish to a whisper, accented by brushes on cymbals or an ostinato bass figure, then pull up with a flourish for another whirl around the field until the final touch down.

Now and then he would get up from his bench and focus on the inventive solos of his magnificent sidemen. The rhythm section was truly remarkable and oh so tactful and subtle. They were always there providing the most exquisite accents to Jamal’s improvisations and rhythmic fantasies.

It is so rare that we hear the understated masterful drumming of Herlin Riley. At one point he was swinging so fiercely and inventively that every bone in my body was set in motion. My foot sticking out in the aisle kept time with the beat. I wanted to bounce out of my seat and shake my bootie.

Listening to Riley made me think back to Connie Kay (April 1927 – 30 November 1994) the drummer for the Modern Jazz Quartet. When I first heard him he seemed like a drummer who didn’t do anything. I was just getting used to the less is more approach of the MJQ. Back then I was more attracted to powerhouse drummers like Art Blakey or Max Roach. Only much later did I come to appreciate that Kay was on their level. As is Riley.

It takes the greatest masters to bring it down low and slow. To stay under great soloists like Jamal. But to always be there. Giving while never taking.

What then to say about the superb bass playing of Veal and the wonderfully eccentric percussion of Badrena. We were mesmerized by Veal’s enormous hands with long, strong fingers. They were a blur as they wailed on the strings during a crescendo that climaxed a tune.

We were so riveted by the constant inventions of Badrena that it bordered on distraction. He seemed jumpy and excitable while working with an array of congas, bongos, tiny cymbals, rattles, whistles and other devices. Now and then he would utter a sound into the mike.

Badrena was in perpetual movement always finding just the right accent or device to enhance Jamal’s playing. Often he was looking off stage. He seemed to be searching for something or someone. A couple of times he departed and returned in a flash. Took off a jacket, hunted for someone to hand it to. Hung it up. Then later put it on. Fussing with the collar. While never missing a beat.

In addition to the music there was a choreography among the players. How they complemented and interacted.

Most infectious was the joy that they expressed for the music they were performing and each other.

There was so much going on. Such nuance and invention.

It is fair to say that no recording or video could possible capture or convey what we experienced last night.

Only through a live performance can one fully appreciate why Jamal is among the greatest masters of the music. Until last night I never fully understood the full range of his humanity and genius.