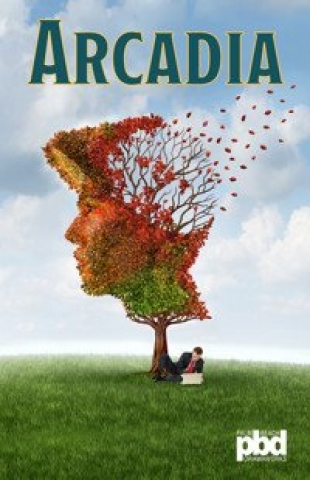 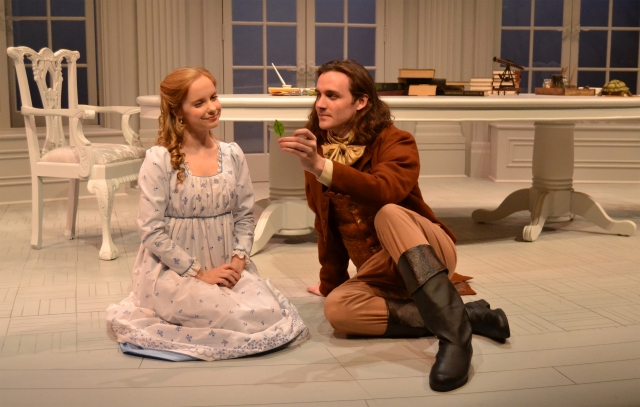 Some plays require preparation before seeing them, even for the most casual theatergoers.

You can’t just walk in knowing nothing about the work and expect to be able to easily follow it without getting frustrated.

Tom Stoppard’s Olivier-Award-winning “Arcadia” is such a work.

If you haven’t read it, or read about it, the play can come across as overwhelming with its unfamiliar terms, places, names, scientific and mathematical subject matter.

Some audience members nodded off during opening night of Palm Beach Dramaworks’ first-rate production, which runs through April 30 in the intimate Don & Ann Brown Theatre.

It’s a shame to miss any of the action; the production’s so engaging and energetic that you find yourself riveted thanks to the vivid, lively portrayals of cast members. Under the guidance of director J. Barry Lewis, who paces the play at the right tempo so we don’t get lost in the complex tale, the actors eloquently speak Stoppard’s heightened language. The performers accentuate their portrayals with dramatic gestures without their acting seeming forced.

This talented cast disappears into Stoppard’s settings of Derbyshire, England in 1809, and the present day, set in the same luxurious country home. Brian O’Keefe’s costumes clearly differentiate each period.

The play’s likely to lead to self-reflection and much discussion about our world, its future and how we view the universe. It is chock-full of ideas as well as Stoppard’s signature hilarious and creative wordplay, not to mention an unorthodox but smart structure.

The play shifts between time periods, allowing us to see present-day researchers investigating what happened in a large country home in Derbyshire, England in 1809 while during other scenes, we witness those happenings in the 19th century.

One might refer to Stoppard, who has won four Tony Awards for best play, as a modern-day George Bernard Shaw. His ingenious use of language, wit, piercing intellect and presentation of thought-provoking ideas evokes comparisons to the great Irish playwright and critic.

Throughout “Arcadia’s” roughly three hours, Stoppard examines everything from order vs. chaos, free will vs. determinism, the difficulty of researching to uncover truth, reason vs. emotion, romanticism vs. classicism and the mysteries of sex, science and math.

It’s a lot of material to cover and some might say it all amounts to a hodgepodge, defined as a "confused mixture." This might be a good thing in the case of "Arcadia;" it can symbolize the idea of chaos discussed in the play and hint at the confusion coming at the end.

“Arcadia” is sure to offer audience members a stimulating mental workout. But it’s also an intriguing detective story and a tale of sex, sophisticated wit and wordplay – all rolled into one.

The play begins with the words of a teenage math prodigy, Thomasina Coverly, curiously seated on a table, which seems out of place for the 19th century. Perhaps it is foreshadowing the play’s slow descent into disorder.

Coverly is played with joyous charm, precociousness, confidence and curiosity by Caitlin Cohn. The petite stature of this veteran of more than 25 theater productions convinces us she’s a youngster, although she’s obviously an adult.

Cohn convincingly speaks with the small but radiant voice of an excited child during Christmas. She’s being tutored in the drawing room of her home by Septimus Hodge (portrayed with a rebellious, care-free streak by Ryan Zachary Ward).

Even at Coverly’s young age, she’s about to make a major discovery in the field of mathematics, but the sexual shenanigans of the adults surrounding her leave her curious.

“Septimus, what is carnal embrace?” are the first words of the play, spoken by the young lady. The line sets the tone for the play’s investigations of the mysteries surrounding sex and our desire to connect and understand our world.

The young tutor gives a rather risque definition to his student. She learns a lot more than girls of that time period were expected to, much to the disapproval of her mother, Lady Croom. She’s convincingly played by Margery Lowe, who mixes into her portrayal an air of self-importance and an overbearing manner with just a bit of charm stemming from perhaps enjoying the luxurious lifestyle.

As we watch modern-day researchers investigating what exactly happened in that house during the 19th century, we’re introduced to a variety of concepts and people.

With climate change in the news, we can’t help but shudder when we hear the following from mathematics student Valentine (a bookish, opinionated Britt Michael Gordon): “Your tea gets cold by itself, it doesn’t get hot by itself…Heat goes to cold, it’s a one-way street. Your tea will end up at room temperature. What’s happening to your tea is happening to everything everywhere.

"The sun and the stars. It’ll take a while but we’re all going to end up at room temperature.”

Vigorous debates between Valentine and researcher Bernard Nightingale (a fiercely-determined, arrogant and always captivating Peter Simon Hilton) play out during the modern-day scenes.

Also investigating the past is researcher Hannah Jarvis (a commanding, assertive and high-strung Vanessa Morosco).

One of these “sleuths’” top disagreements focuses on whether a murder took place in the house or on its grounds.

This should appeal to mystery buffs, while the play’s focus on entropy is likely to resonate with many. Entropy is a lack of order or predictability and the gradual decline into disorder.

One need only look into the halls of government to witness these characteristics. Ask many people, and they might tell you if disorder doesn’t already reign in the world, the decline into chaos is hardly coming on gradually; our world, they might say, is plummeting into disorder like a bullet train traveling at full speed down a rocky descending road full of curves.

The tension between order and chaos is neatly captured in scenic designer Anne Mundell’s stately set.

For the most part, the white, spacious design is upscale, immaculate and orderly. But if you look closely, the books on a desk are arranged in a haphazard manner, perhaps foreshadowing the disorder that’s about to come. This chaos arrives at the end of the play, when the two periods blend; the modern-day characters and those from the 19th century co-exist at the same moment.

It makes you wonder...what would our country’s founding forefathers think if they could step into the halls of government today?