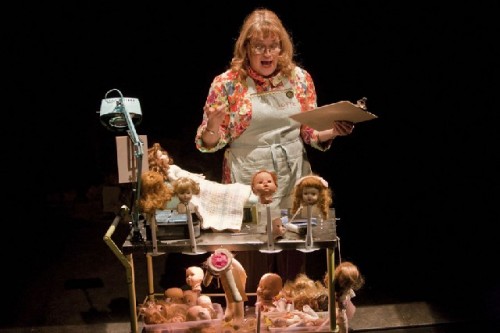 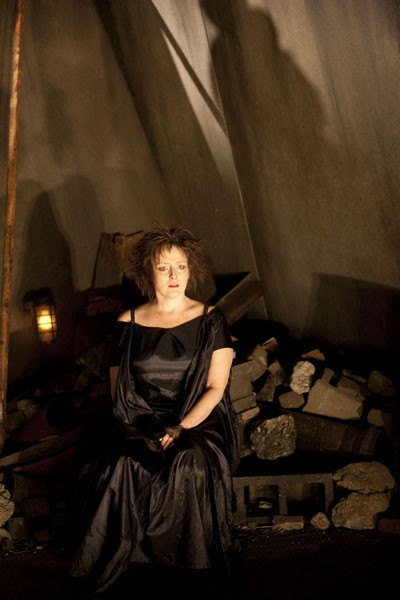 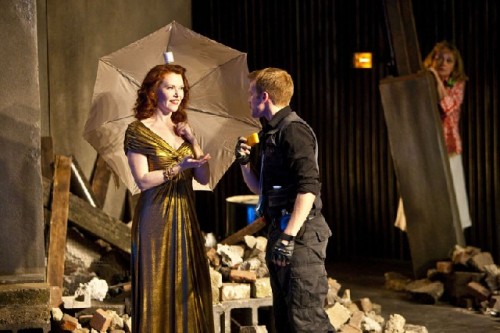 Helen, Cereena Melia, has a way of getting what she wants. 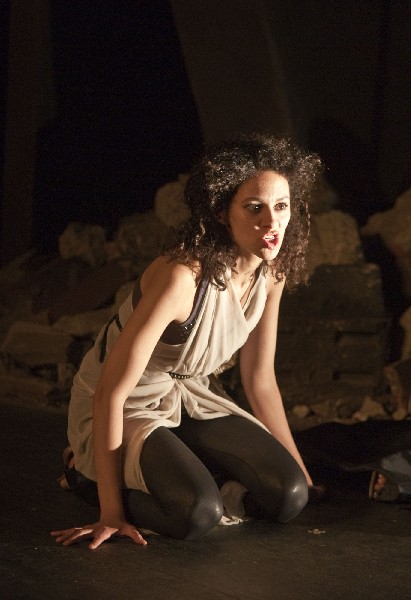 The deranged Cassandra, Nina Kassa, related being seduced by a stallion.

The title of the play by Christine Evans "Trojan Barbie" having its world premiere at the American Repertory Theatre is certainly catchy. It conflates two evocative notions "Trojan" think War and "Barbie" which conjures sexy images of dolls. It would seem to be a winning combination. The other notion is the juxtaposition of an historic event, the Trojan war from circa 2,000 B.C.E. and the ultra contemporary Barbie. This did not quite deliver on what promised to be a lively evening of theatre and update of the Euripides play "Trojan Women."

The original Greek tragedy focused on the fate of the surviving wives and mothers of the defeated Trojans who have struggled for ten years against the invading Greek/ American (Iraq) army. The women are clustered around Hecuba (Paula Langton) the wife of King Priam. The wife of her son, the hero Hector, is Andromache (Skye Noel) clutching a life size doll signifying her son, a prince of Troy. We also encounter Cassandra (Nina Kassa) slipping into madness and graphically informing us of fornicating with a horse/ god. She is anxious to convey to us more than we really need to know.

The only one appearing to have any fun in this somewhat downer of a play is, natch, Helen (Careena Melia). She has all the best lines and the only real humor in a mostly grim evening as she vamps and slinks about in a gold lame ball gown. While we much enjoy her presence,  livening up the pace of the play which is somewhat leaden, she is there at best for comic relief. This is, after all, Tragedy and while Evans wants to update the plot to a contemporary context, befitting the experimental A.R.T., she does not want the rewrite to morph into farce. But the characters are often so miscast and misplayed (for example Polly X., Kaaron Briscoe, as an African American hip-hopper/ princess) that the drama risks becoming a parody of itself. Caveat Emptor the avant-garde is never easy. You have to suffer if you want to play the blues. And, as is often the case with A.R.T., cutting edge productions, no pain, no gain. Bring bandaids.

The trope and dramatic device of this upgrade on Euripides revolves around the contemporary character Lotte (Karen MacDonald). She is a lonely single of a certain age who repairs dolls. Ah, there's the plot revealed. As if we missed the point there is a string of broken doll parts above in a stark, constructivist set of ruins by David Reynoso, apparently inspired by  Anselm Kiefer's "Jersey Barrier" cement sculptures on view at Mass MoCA.

Lotte decides to combine cultural tourism and trolling for male companionship by taking a singles tour of the site of historic Troy in Turkey. Actually, there is not much to see as the site of a mound of nine stacked up cites was mostly bulldozed by the ersatz archaeologist/ looter Heinrich Schliemann. He brought the Treasures of Troy back to Berlin where they were looted by the Red Army and ended up in the collection of the Hermitage.

While on tour Lotte is "captured" by an invading Greek Army, armed with machine guns, not swords, and thrust back in time to share a fate with Hecuba and the other miserable women. Except Helen, of course, who knows how to charm the guards out of the occasional ibuprofen. Ten years of being blamed for the Trojan War would certainly result in migraines.

Once that Lotte accepts the absurd reality of  a time warped destiny she settles in to do what she does best. Yes, that's right, fix dolls. This is the signifier for all of the ersatz corpses littered about the ruined city. She tries to help Andromache clutching to the doll representing the only surviving male heir of the ruined civilization. War is hell.

The soldiers demand the surrender of  her "son." They intend to run over him/ it with a truck, but if there is cooperation, the mangled corpse will be returned for burial. Such a deal. The damaged doll/ child is indeed returned and Lotte helps Andromache to repair it. This is intended as the most poignant moment of the play.

Through some plot twists Lotte escapes and is celebrated in the British press. It is thirty seconds of fame she does not appreciate and laments that little attention is paid to the fate of the Trojan Women. By then, sad to say, I was also callous and apathetic. Mostly because this version of the fate of the wretched women just failed to connect with any of the characters as plausible and compelling. At best, this play is a pastiche that just doesn't come together in a manner that offers fresh insights to a very old story. Evans just appears to have wandered into the Valley of the Dolls, and like Lotte, got confused and disoriented rather than capturing our hearts and minds.