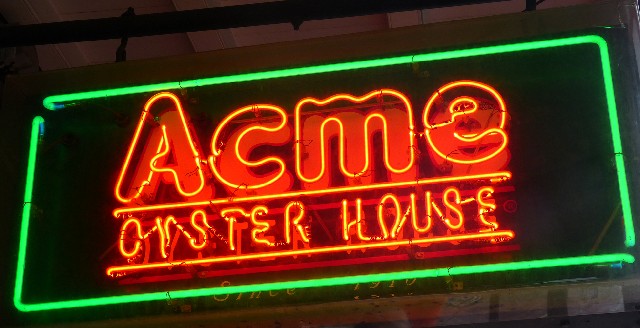 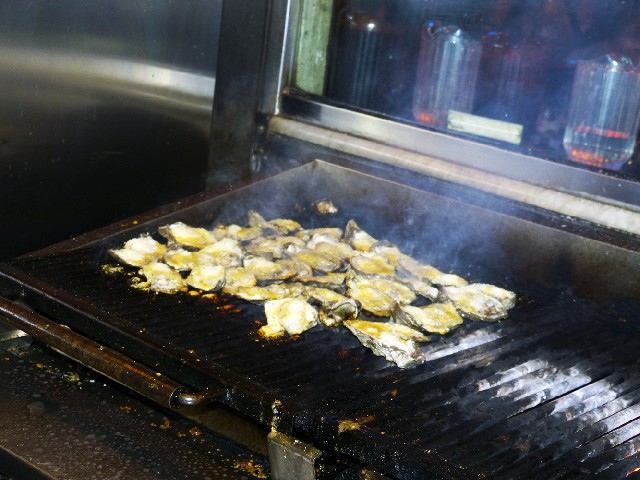 Oysters on the grill. 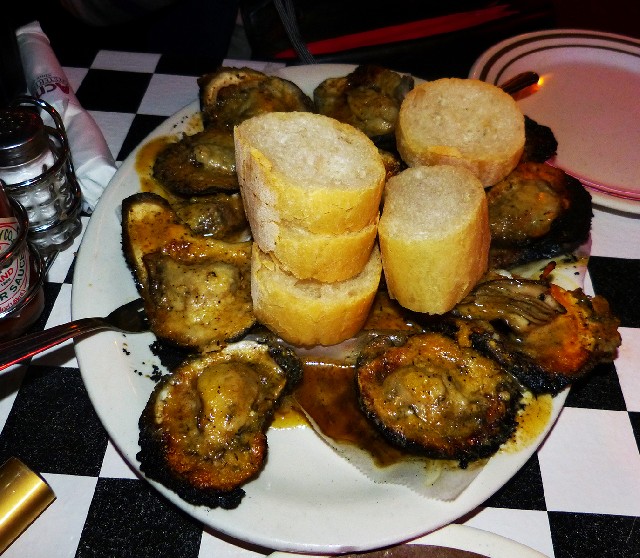 A dozen with French bread for slurping up the juice for $19. 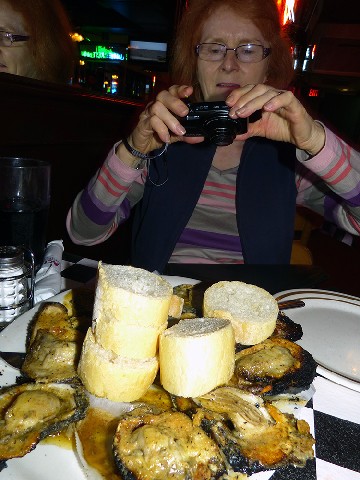 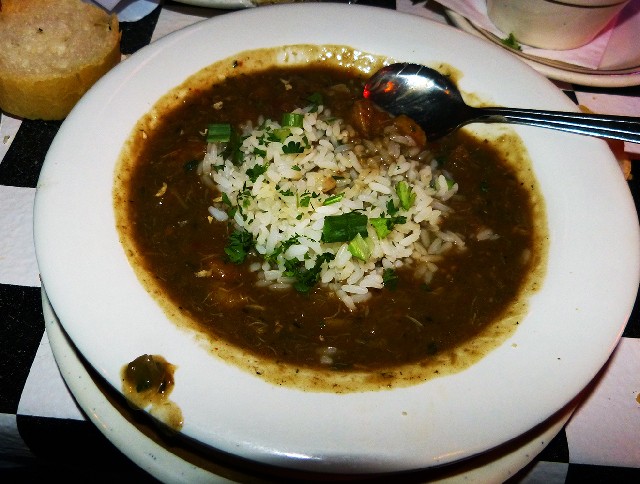 A bowl of seafood gumbo. 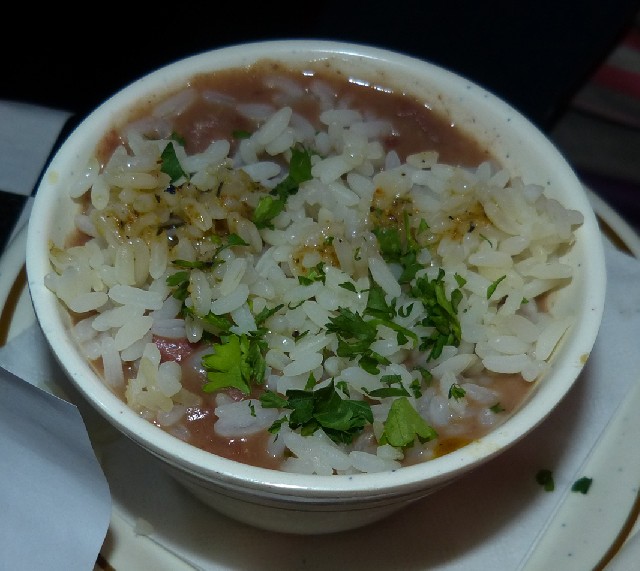 A side order of red beans and rice.

A side of jambalaya. 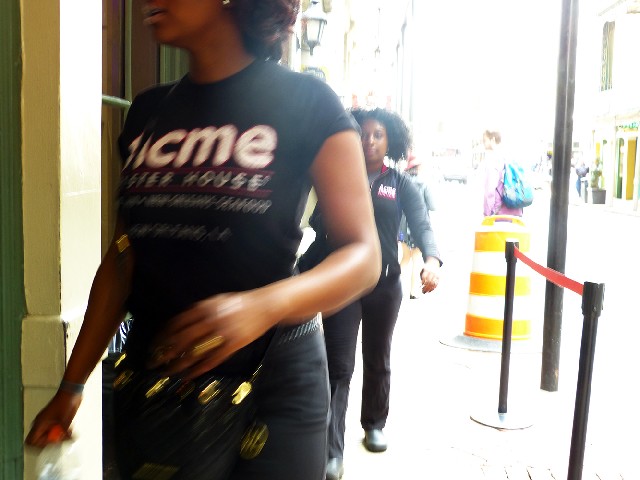 A changing shift at Acme. 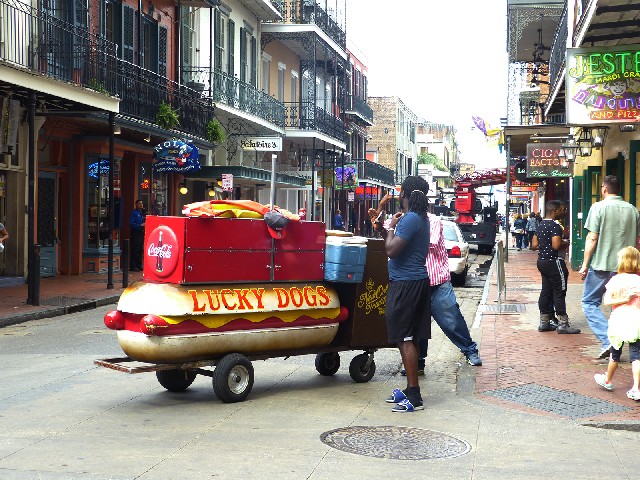 Setting up a hot dog cart. 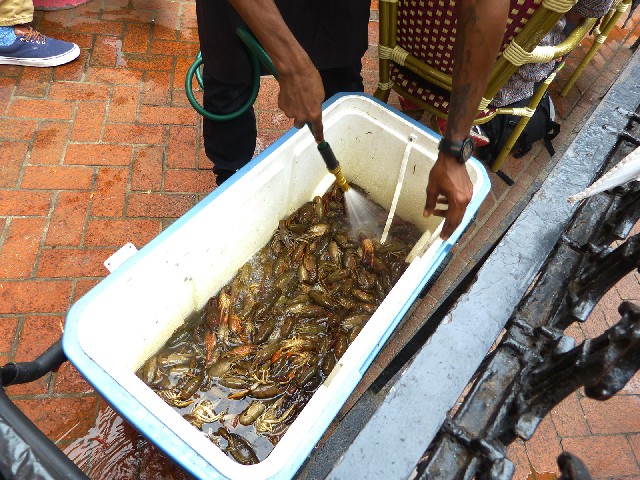 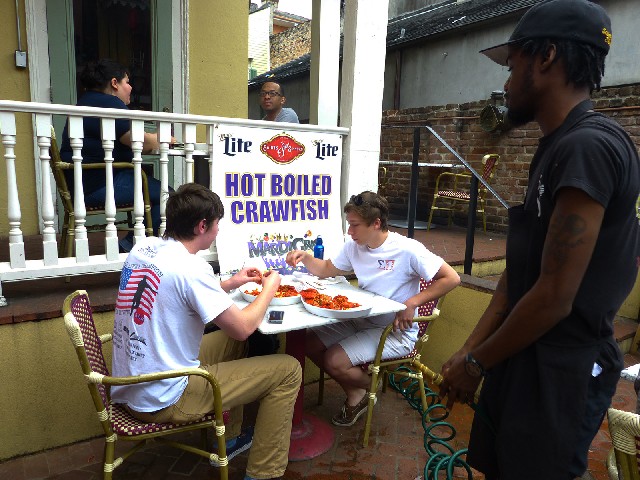 Hunkered down with mud bugs. 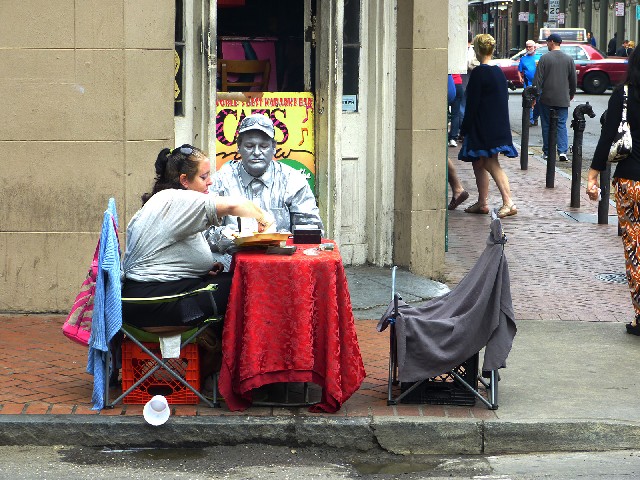 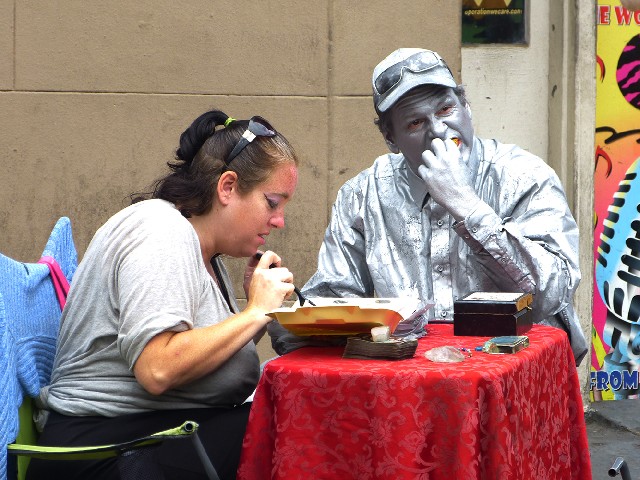 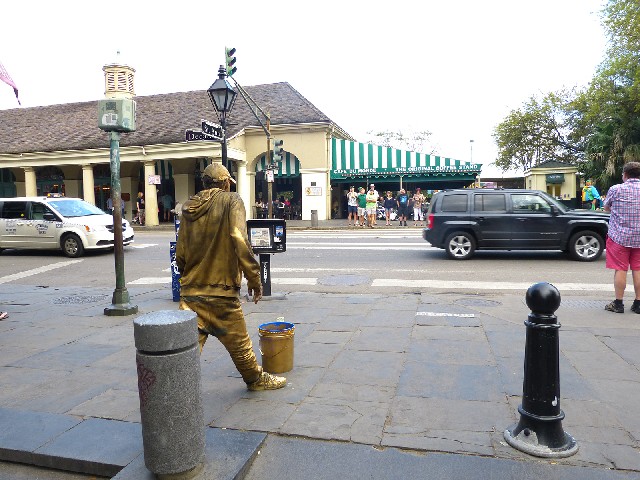 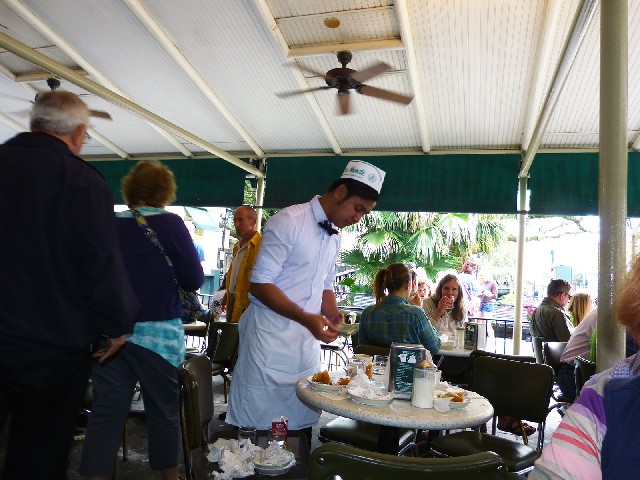 Grabbing a table as it was being cleared. 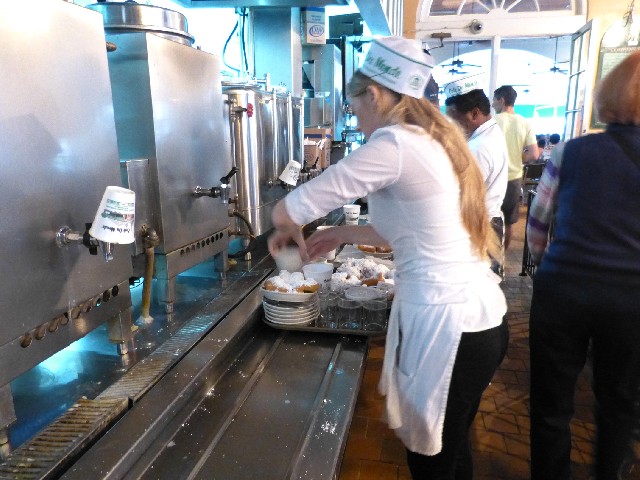 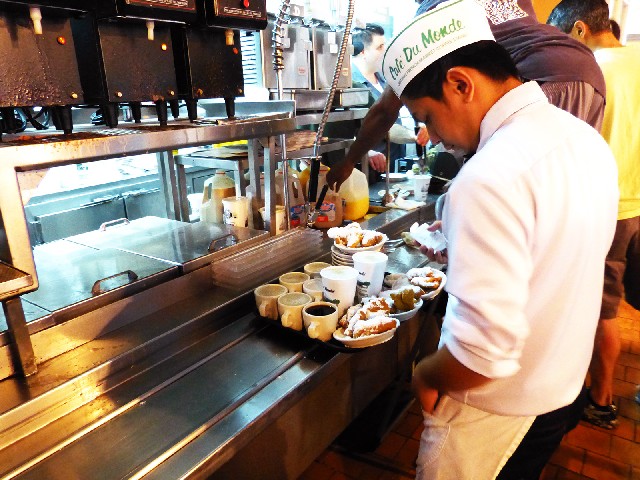 A busy waiter with a tray of fresh beignets. 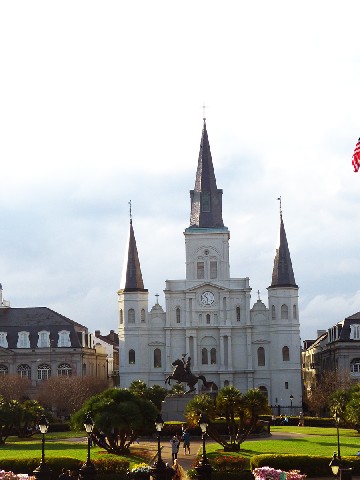 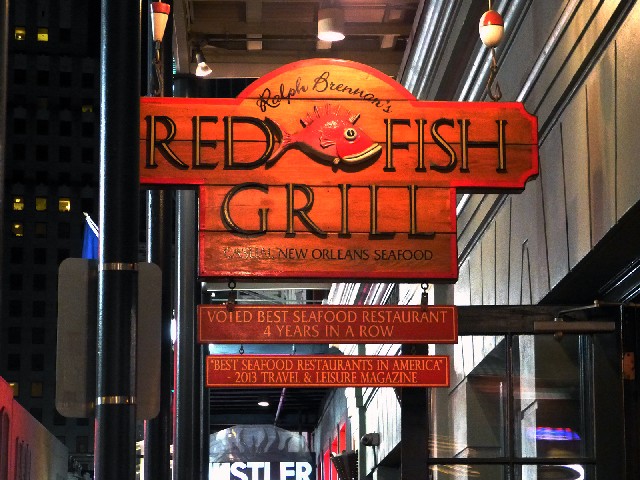 For lunch it was possible to be seated at popular Red Fish Grill without waiting. 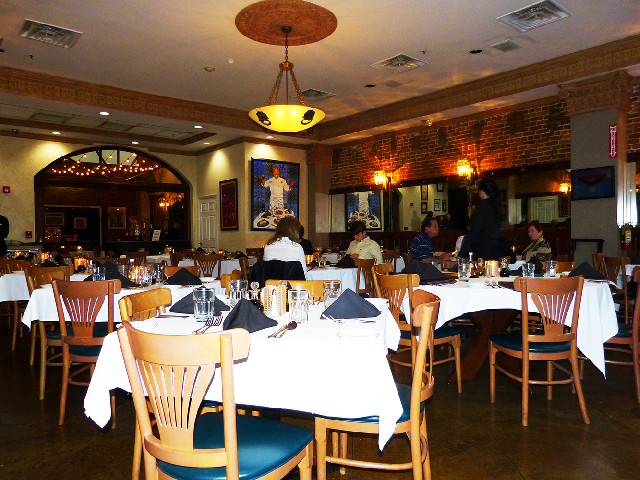 The dining room was relatively empty. 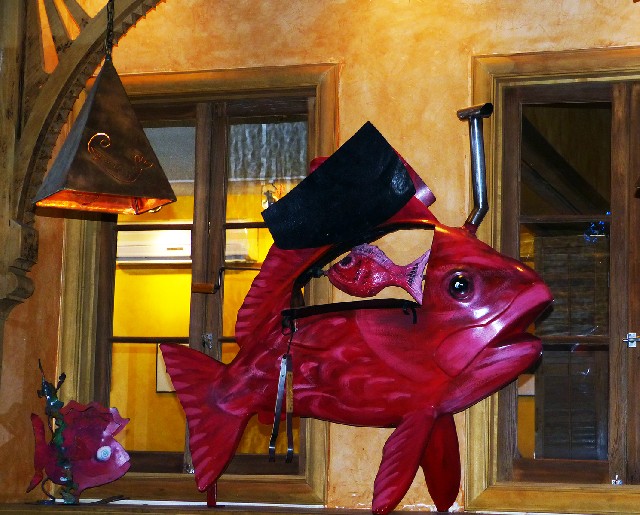 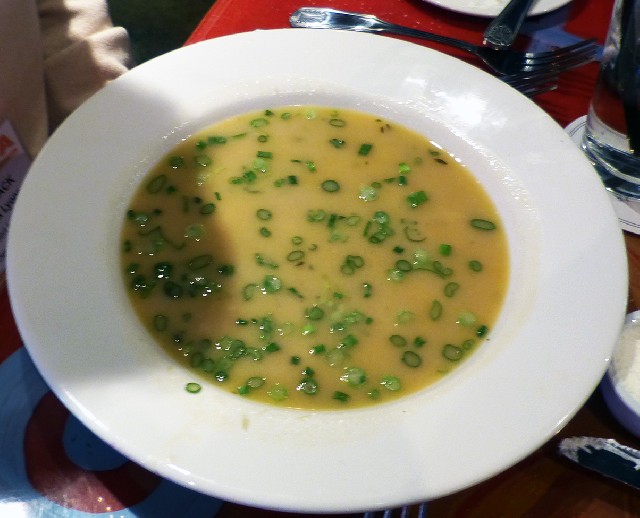 Jack had the soup du jour. 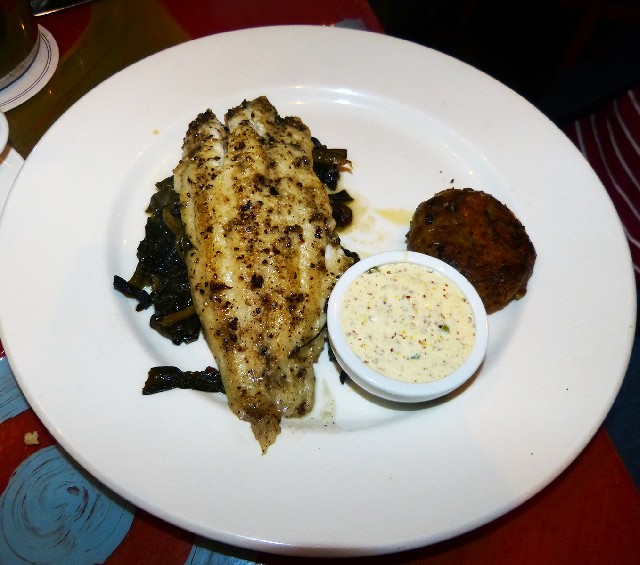 Astrid had the local fish of the day. 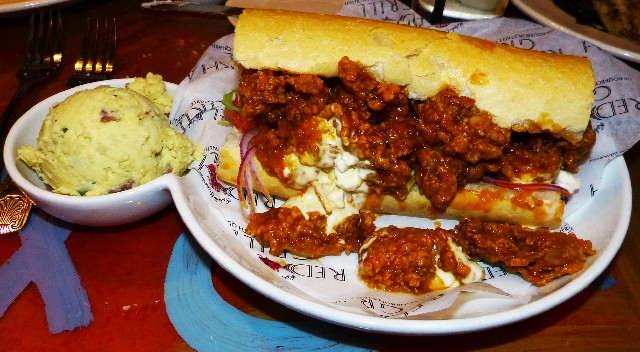 The barbecue oyster po boy was an explosion of flavor and texture.

During the 1960s I was on my  way to Mexico to spend the winter with my girlfriend's uncle Pedro on his hacienda when we ran out of cash in New Orleans.

It was Mardi Gras time and we watched parades catching beads and doubloons.

Staying at the cheap St. Charles Hotel, that seemed appropriate, we feasted on gumbo and oysters.

The cops were rounding up and busting hippies. I contacted Howard Smith and it ran as an item in his Village Voice Happenings column. I knew him and Bob Fass from WBAI, a talk radio DJ, through promoting a concert by the Viking street musician Moondog.

Astrid and I pulled into NOLA during a 2008 road trip loop through the South West. We reported on Cheap Eats at the time.

It was a long hike from our hotel to the French Quarter so we just had time to discover the delights of Acme Oyster House and hang out at Cafe Du Monde near Jackson Square. We visited the Ninth Ward and Lafayette Cemetery posting stories that continue to get hits. We took a ferry across the broad Mississippi where I managed to photograph Forest Whitaker shooting a movie.

Last week during the conference of the American Theatre Critics Association our hotel was in a prime location on the corner of Canal and Bourbon Streets.

So we got to explore the adjacent French Quarter in depth.

Arriving on Sunday night for the conference that actually started on Wednesday we got a jump start. It turns out that Acme was just around the corner. On Monday we were able to walk right in for lunch. That afternoon we took the colorful street car to the New Orleans Museum of Art.

Of course we split an order of the magnificent broiled oysters. It's $19 for a dozen with French bread to absorb the juice. Wanting to try a variety of dishes I ordered the seafood gumbo and we shared side orders of red beans and rice as well as jambalaya. Traditionally, red beans and rice are served on Mondays simmered with whatever meat is left over from Sunday dinner for flavor. Since returning I made a batch which I am having for lunch. They cook their beans real soft while I prefer that they have more texture. At home I pour on the hot sauce and some soy. I use fried thick bacon and aged hard salami for flavor in the beans.

Fast Eddy organized a dinner with the gang at upscale and famous Brennan's. It's above our pay grade so we passed. No point emptying your wallet on the first night of a trip. As host of a large party he told us that his bill came to $200. But it was "fabulous." He ordered extra items to share with the kids. The average bill was about $70 to $80 each depending on how one ordered. In hindsight we should have tagged along.

We hit Bourbon Street around 7 for dinner that night wanting to try Red Fish Grill which was near the hotel and well recommended. The wait was an hour which proved to be true everywhere we tried. Finally, exhausted from a day of running around, we opted for Popeyes a chain featuring cajun food where the bill for both of us came to twelve bucks.

Before the conference started with daily "enhanced" continental breakfast we enjoyed the fine hotel dining room. At around $12 we enjoyed the breakfast items including a stuffed omelet with home made andouille sausage and spicy New Orleans style home fries. On other mornings I tried the shrimp and grits as well as their special eggs Benedict with a NOLA twist. The conference breakfast was so crappy that while I stayed for the meetings Astrid visited the restaurant. She sticks to gluten free and that was not possible with the official breakfast.

We did manage to get into Red Fish Grill for a delightful lunch with our pal Jack Lyons. He enjoyed a nice soup ($7.25) and Astrid ordered the fish ($20). Both were terrific. I opted for the barbecue oysters po boy ($15.95) which just blew my socks off. It was a culinary highlight of the week. The oysters were perfectly juicy with a nicely piquant sauce and just the right heat.

Later in the week we took the gang to lunch at Acme which they much enjoyed. This time I opted for their fried oyster po boy which I found dry, tough and disappointing. It was no match for the Red Fish Grill.

On my gimpy wheels we did a lot of walking. If you want to get out of the Bourbon Street madness it's much nicer on Royal Street. We also found quiet residential parts of the French Quarter where people seem to actually live.

Of course we made our way to Jackson Square for the obligatory visit to Cafe du Monde. It's always packed. We skipped the line and just grabbed an open table. The traditional coffee is not served with cream. So I had hot chocolate while Astrid had tea. The wonderful crispy beignets are served under a mountain of powdered sugar. I did my best to brush it off and just enjoy the deep fried pastry.

In the French Quarter there are lots of options for cheap eats from cafeteria style places from hot dog carts to pizza and po boy joints..

On Bourbon Street the  rubes seem more intent on drinking than eating.

Probably the best option is to balance cheap lunches with fancy dinners. In another report we'll relate how that worked out.