Frequently Visited College of the Ozarks 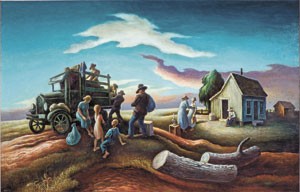 In 1940, the celebrated Regionalist artist Thomas Hart Benton was hired by 20th Century Fox Studios to paint an image to advertise Foxâ€™s film version of John Steinbeck’s novel The Grapes of Wrath. In fulfilling his commission, Benton painted one of his most powerful works, The Departure of the Joads, depicting the family as it prepares to leave its ruined Oklahoma farm for the promise of work in California. Decades later, Benton donated The Departure of the Joads to College of the Ozarks, near Branson, Missouri, where it is on permanent display at the schoolâ€™s Ralph Foster Museum. Image courtesy of College of the Ozarks.

Thomas Hart Benton—painter, muralist, and writer from Missouri—often stopped at College of the Ozarks, in the mountains of southern Missouri, to visit his long-time friend, art teacher Steve Miller. Miller would take Benton to visit art classes, where Benton would speak at length with students about their works and art theory. Benton eventually served as the artist-in-residence at the College’s first Festival of the Arts Celebration in 1964. In 1973, when Benton was eighty-four, he came out of retirement to paint The Sources of Country Music for the Country Music Hall of Fame in Nashville. While doing preliminary sketching and research for the project, Benton visited College of the Ozarks, which provided him with accommodations and meals during his stay.

After Benton returned home to Kansas City, he sent the College a gift as a thank you for its help and hospitality: his iconic 1940 egg tempera and oil painting Departure of the Joads. The painting, commissioned by 20th Century Fox to be used for advertising its film version of John Steinbeck’s The Grapes of Wrath, shows the Joad family getting ready to leave Dust Bowl Oklahoma to seek work in California. One of Benton’s masterpieces, the painting was used for movie posters, magazine advertisements, and lobby cards, and was even reproduced billboard size. Departure of the Joads, now on permanent exhibit in the Ralph Foster Museum on the College of the Ozarks campus, continues to evoke strong emotions around its themes of economic hardship and family disintegration.

Ralph Foster Museum Curator Jeanelle Ash said, “Articles from local journals and newspapers written by Benton’s friends and fellow artists are fascinating to read, especially those written by Benton’s good friend Steve Miller, who was an art instructor here at the College and former director of the Ralph Foster Museum. Those articles along with family photos and letters written by Benton are held in the museum’s archival collections. They give a good understanding of Benton’s personal connections to the history of College of the Ozarks and into Benton’s fascination with the beauty of the Ozarks region.”

COME AND LISTEN TO A STORY ‘BOUT A MAN NAMED JED. The Ralph Foster Museum holds a beloved American cultural artifact: the cut-down 1921 Oldsmobile Model 46 Roadster seen transporting the Clampett family to Californy at the beginning of each episode of The Beverly Hillbillies television show. You can have your photo taken sitting behind the steering wheel in front of a large photo of Uncle Jed, Granny, Jethro, Ellie May Clampett, Mr. Drysdale and Miss Hathaway. The customized vehicle (a touring car body with the frame of a flatbed truck) was donated to the museum by series creator Paul Henning, a Missouri native, who was inspired to do the show after a camping trip in the Ozarks. Although the Clampett family hometown was never specifically identified, in various episodes they referred to the towns of Branson, Springfield, and Silver Dollar City, all near The College of the Ozarks.

HARD WORK U: COLLEGE OF THE OZARKS. Founded as The School of the Ozarks in 1906, College of the Ozarks is a private, Christian liberal-arts college with 1,500 students. A work-study program has always been an integral part of the institution. The school charges no tuition. Instead, all full-time students work 15 hours weekly at one of 80 campus workstations, which include a fruitcake kitchen (30,000 baked yearly), a print shop, a greenhouse, a 60-cow dairy and a student-run hotel and restaurant. The college, which discourages debt and does not participate in any government or private loan programs, guarantees to meet the remaining portion of each student’s expenses so that graduates leave debt-free. In 1973 The Wall Street Journal described College of the Ozarks as "Hard Work U." The name is now the school’s motto.

She may be reached at susan@smdailyjournal.com.

This story first appeared in the San Mateo Daily Journal.