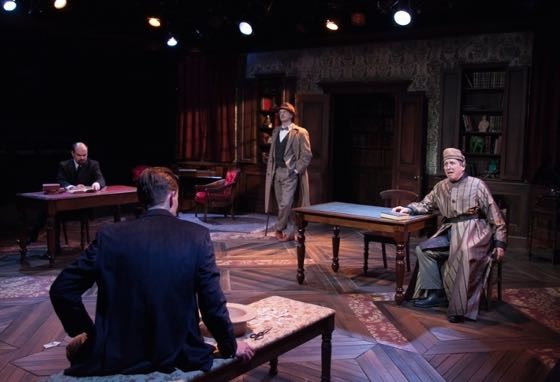 The first time I saw a Tom Stoppard play was on my first trip to London in 1981. We saw a production of "On the Razzle" adapted from an 1842 Austrian farce that also inspired Thornton Wilder's "The Matchmaker."  (Going "on the razzle" is an English term for drinking and partying.) The play was silly and charming and the linguistic acrobatics were breathtaking. I'm not even sure I loved the play but the dialogue was dazzling.

Stoppard's plots and characters have evolved and deepened over the years, but stunning verbal acrobatics are still a hallmark of his writing. Stoppard's "Travesties" in a new production at Remy Bumppo Theatre is a brilliantly conceived, acted and produced surrealist comedy -- and the language still makes me gasp.

The opening introduces a set of puzzle pieces that get unpacked and repacked throughout the play. In the Zurich Public Library, James Joyce (James Houton), Tristan Tzara (Greg Matthew Anderson) and Vladimir Lenin (Keith Neagle) sit at separate tables dictating, reading and writing. Joyce dictates bits of "Ulysses" to Gwendolen (Kelsey Brennan), then sorts scraps of paper from his pocket for gems of his writing. Tzara writes lines of poetry, slices them up and tosses them in a hat. Lenin, writing about imperialism, receives news of a revolution from his wife, Nadya (Jodi Kingsley). It's a confluence of geniuses in Zurich, 1917.

Carr has reached old age, still thinking he did not become the somebody he should have become. (Doesn't that thought afflict all of us?) He is still striving for his 15 minutes of fame, but he is always perfectly tailored. He remembers when he learned the war had started. He was talking to a tailor in Savile Row, wearing "a houndstooth check, slightly flared below the knee" and then immediately ordered his uniform: "a complete set of Harris knickerbockers with hacking vents." Yes, he once performed in the Oscar Wilde play "The Importance of Being Earnest" "in the demanding role of Ernest, no, not Ernest, the other one." (That would be Algernon.) He and Joyce shared a history with the English Players in Zurich and Carr still disputes his purchase of a pair of trousers. One of the silly recurring bits is Carr's inability to remember Joyce's name. He calls him variously Janice, Doris, Deidre.

The youthful Carr, the peacock, is totally offended by Joyce's garb, which always features mismatched suit pieces. Finally, he says, "Why for God's sake cannot you contrive just once to wear the jacket that is suggested by your trousers?" And Joyce replies, "My wardrobe got out of step in Trieste, and its reciprocal members pass each other endlessly in the night."

One plotline involves Tzara's infatuation with Gwendolen, who is Carr's sister. Another is Carr's infatuation with Cecily (Meg Warner), the militant librarian who does a spirited semi-striptease for him. A most charming scene brings Cecily and Gwendolen together for tea. In their conversation, entirely in rhyming couplets, they discuss the attributes of the men who pursue them.

The most important discussion is the debate about the definition of art and the role of the artist in society. Tzara, the deconstructionist and founder of Dadaism, and Joyce, whose Ulysses proves he could hardly be called a traditional novelist, hurl insults back and forth. Joyce defines it thus: "An artist is the magician put among men to gratify their urge for immortality." And then he goes on, "What now of the Trojan War if it had been passed over by the artist's touch? Dust. A forgotten expedition prompted by Greek merchants looking for new markets... But it is we who stand enriched, by a tale of heroes, of a golden apple, a wooden horse, a face that launched a thousand ships..."

Are you thinking it would be helpful to have seen or read Ulysses, Joyce's massive masterpiece, studied Russian history or seen Oscar Wilde's witty play? (No, I have never made it through all of "Ulysses" either.) But there's really no sense in preparing to see "Travesties." Just go and let the words roll over you. The dialogue moves quickly so you'll miss some of it, but never mind, the experience is spectacular. And so is the staging by director Nick Sandys, an expert on the playwright's work.

The production is a visual treat too. It's staged at the Greenhouse Theater Center's upstairs mainstage and Joe Schermoly's design for the performance space works as both the Zurich Public Library and Carr's drawing room. Windows on either side of the stage serve as screens for projections of Dadaist art. Rachel Lambert's costume designs are perfect representations of the play's mood and the female costumes are especially fun.