Our Digital Present and Future Explored 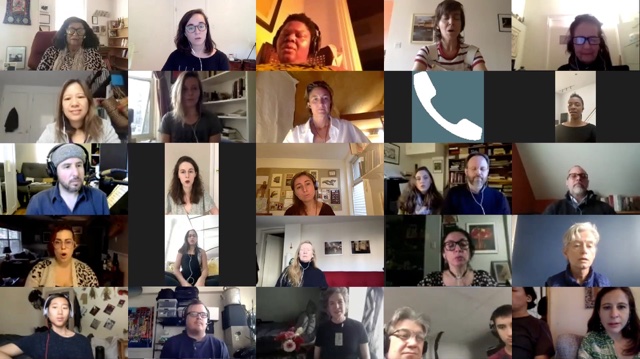 A percussion group from the Manhattan School of Music offered a concert on Zoom on April 6.  Each performer had his own window.  All performers remained on the grid all the time, but when one performer was featured, his screen was outlined.  Headsets connected the performers. It was lively and fun.

On the following day, the International Contemporary Ensemble hosted a virtual town hall to discuss concert performance in this, the worst of times, and how it might become the best.  In this age of foolishness, wisdom is peaking through.  Assembled for the Town Hall were artists and audience from the world of streaming.

One participant spoke about Music on the Rebound reviving Pauline Oliveros' Tuning Meditation (a Metropolitan Museum version). People from the world over are participating in the current event on Saturdays at 5.

Another digital curator, Shaya Lyon of Live Music Project talked about an effort to create an audience for live-streamed events.  Humans want and need more than an earplug connection to their soundscape.  They want to be there.  Zoom offers that possibility.

Eun Lee has a day job at Carnegie Hall. At the same time she runs The Dream Unfinished Orchestra. Each season is centered about a theme.  This year's is voting rights.  Live performances are on hold, so Lee is planning a digital season to coincide with the fall elections.  The Red, White and Blues will use classical music to spark voter interest in voting rights and voter suppression, and promote greater civic engagement throughout NYC. The history of racially motivated voter suppression efforts will be reflected in music by Native-American composer Juantio Becenti and Black composer Wendell Logan; the disenfranchisement of incarcerated populations will be represented in music by Joseph Bologne - an Afro-French composer imprisoned in the aftermath of the French Revolution. The voting record of women of color will be presented through composers of color such as Margaret Bonds and Jessie Montgomery.

Movement to improvisation has led some entrepreneurs to fund raise during concerts.  Discussion centered around the possibility of voluntary ticketing. If we were planning to buy a ticket to an event we are now streaming, punching up PayPal seems logical.  (It was suggested that the PayPal account be in the name of the sponsoring group, and that is be a 501 c(3).

Edward Yim, President of the American Composers Orchestra joined in to talk about their commissioning program for emerging composers.  During this tough time, ACO asked grantees if they were employed and earning a salary at this time.  One composer said Yes, and that his grant should be given to a composer who had no income now.

ICE had planned to perform in the Opera Omaha ONE Festival on March 20th, but the event was cancelled. Collective Reverberations was to be a free, family-friendly sound exploration about site-adaptation, bringing the audience into music from all sides featuring concentric circles of radiating sound. ICE migrated Collective Reverberation to the virtual space. Follow along an exquisite-corpse-chain-letter featuring antique railroad spikes and electronic sounds.

As prescient journalist Henry Luce once said, Where it will all end, knows God.  Yet this beginning dialogue, collaborative, border crossing and music driven, is provocative and hopeful.