I Drink the Air Before Me 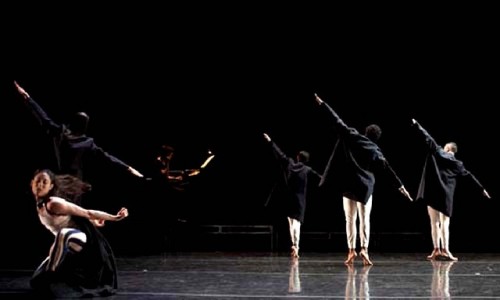 The processional invocation of the opening segment. 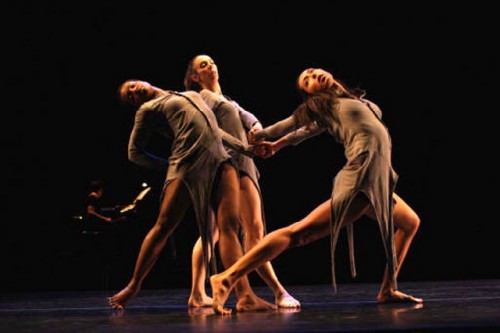 There was a bit of mischief as we waited for the beginning of the new Stephen Petronio work I Drink the Air Before Me last night at Mass MoCA. The dancers were warming up on stage with a triangle of curtain at an acute angle partly obscuring a corner of the stage. A scruffy character, the Salty Dog, passed by and dropped off cards in empty seats seemingly at random. He wandered about and we speculated that this might be an artist seizing the opportunity for an ersatz performance piece.

He was attired in a sailor's foul weather gear, the theme of the evening, with a beard and mass of wigged hair. Later he appeared on stage without the slicker to reveal hip boots. There was a muttering cadence as he spoke to us in a soft low voice in seemingly real time updating us. The Salty Dog returned to the audience dragging along ropes attached to a light tower on the edge of the stage. These were held up above the heads of the audience and tied down. The stage was tethered as if bracing for  turbulence.

As the audience continued to mutter mundanely the dancers gathered in a circle extending their feet to touch. Then exited.The Salty Dog (Petronio dressed by Cindy Sherman) climbed the light tower and droned into the mike "I won't be your man at all if I can't be your salty dog." This was sputtered in a Laurie Anderson like dragged out cadence.

With this oblique burlesque one anticipated an evening of farce. It was but a comic aside of an hour long piece that was anything but. During a post performance discussion with Ella Baff, the artistic director of Jacob's Pillow, Petronio revealed that this new work had been inspired by a desire to create "something dark" after working, one assumed lightly, with singer songwriter Rufus Wainwright. Now in its 25th year the Petronio company is known for  ambitious collaborations with musicians and visual artists. For example, in this piece, being dressed by Cindy Sherman and commissioning music by the composer Nico Muhly, who is in his mid twenties, and it shows.

The title of the work is taken from Shakespeare's The Tempest. Petronio informed us that he had revisited the play and also read Melville's Moby Dick as background. But  the resultant dance is meant to be abstract and not a literal rendering. Rather he wanted to convey the patterns of turbulence that he had observed for months on TV weather reports. He stood briefly to demonstrate twirling steps staring from the ground up that emulate  vortexes and tornadoes. We saw these movements repeatedly through the evening.

The mood of the hour long dance was indeed dark and tumultuous as a metaphor for weather patterns as well as prevailing uncertainty and disturbances in contemporary life. Part of this reflects global warming while another aspect relates to unsettling social and economic uncertainty.  He revealed that an aspect of his choreography was to disrupt  the dancers by making them perform the unfamiliar and counter intuitive. He observed that the company has a syntax and vocabulary of movement that requires a couple of years to achieve fluency.

Typically we saw a lot of circling, twirling movement where the arms extended drawing the body around with them. There was also a signature of frenetic even chaotic energy. This was conveyed by a mayhem of entrances and exits creating pairs, trios, the occasional solo, and then ensemble segments. There were compelling moments. The first involved an invocation of a caped female solo dancer in striped pants gradually joined by others wearing rain coats one at a time. There was no direct connection between them. Another intriguing passage entailed a trio of women evoking sirens. A high point featured a riveting solo by Gino Grenek which culminated in surprise as he jumped off the stage to exit.

For the most part the music remained constant and pulsing. There was odd and inventive instrumentation used percussively. The strings were played mostly pizzicato. There were few if any bowed legato passages. Underneath was a relentless ostinato that recalled the minimalism and repetitions of Glass and Reich. But more raw and primal without their richness of textures and variations. Nico Muhly's music was stripped down and often grating more like disco than concert music. There were even annoying, bleeting passages of trombone,  like expelled methane, and odd accents of bassoon. While inventive and appropriate to the theme of the dance it inspired this was not music that we are eager to hear again. There was no urge to buy the CD. Like a throbbing migraine we wondered when the relentless beat would stop.

There was a shift actually in the final of six passages. The music stopped momentarily and one thought it was the end. A solo dancer returned accompanied by what evolved into a chorus with piano. The music was a more melodic relief from all the relentless, pulsing thumping. But we could not make out the lyrics. They sounded nice but there was no clue to what they might mean. A couple next to me pulled out flash lights to read the text on the cards which the Salty Dog had deposited with some of us. I have no idea if that might have helped.

Yes it is a wonderful, disciplined and well trained company. The dancers were deft and committed to executing the austere and demanding choreography. There were the occasional solos and highlights but mostly this was an ensemble piece. One recognized classical elements but in a loose, post modernist mÃ©lange of movement. The whole was greater than the parts.

Indeed it was a dark and stormy night. But it also evoked those disturbing times, somewhere over the Atlantic, when the captain puts on the fasten your seatbelts signal. The voice from the cabin informs us that we will experience turbulence for the next twenty minutes. One feels the sublime power of nature while tossed about. But it isn't a lot of fun. Petronio captured that mood.

While there is much to admire in this work it fell short of adulation. It was good to have the experience and insights but also a relief to land after a rough flight.