La Gazzetta No Masterpiece But Lots of Fun 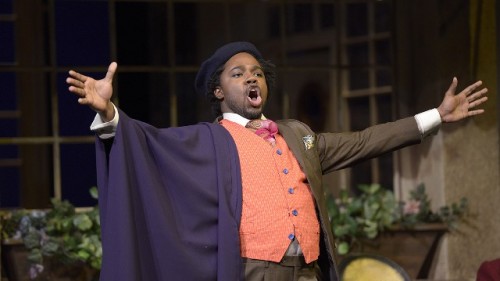 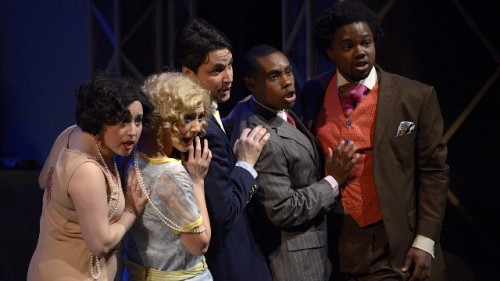 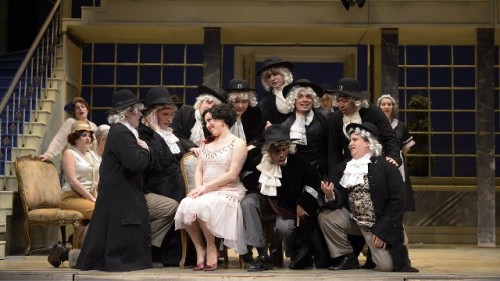 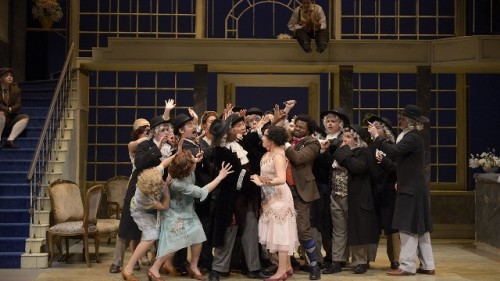 Lisetta and the Quakers: Hilarity Ensues 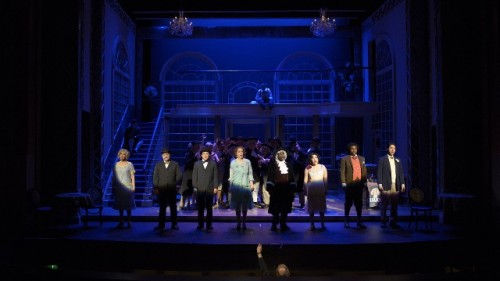 The vocal ensemble at the end of Act II 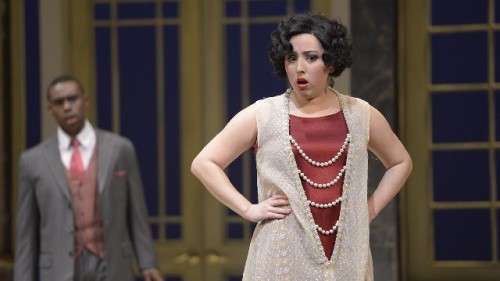 Lisetta (Bridget Haile) show some attitude with her beloved, he inn-keeper Filippo (Jason Ryan) in the background

Well, thanks to the enterprising New England Conservatory, Bostonians were able to experience both in its production of “La Gazzetta,” a true rarity by that great, underrated composer of operas, both comic and serious, Gioacchino Rossini. And if it were no masterpiece, it was a lot of fun.

The production is indebted to Rossini scholar Philip Gossett, the professor emeritus at the University of Chicago who is largely responsible for the Rossini revival that has animated the opera world during the past half century, who served as the conservatory’s musical advisor. (True, he wasn’t alone: The great singers Maria Callas and Marilyn Horne had a lot to do with reviving interest in Rossini by brilliantly singing his works until skeptical audiences acknowledged that there was substance behind the comic effervescence of his scores.)

Gossett prepared the critical edition of the long-neglected “La Gazzetta” in 2002. But the 2011 discovery of the long-lost quintet in the library of the Conservatory of Palermo suddenly makes the work stage-worthy. The lengthy, three-part Act I quintet is the musical highlight of the entire opera, and it is hard to imagine it holding much musical interest without it.

There are reasons the work was forgotten. Rossini himself seems not to have thought much of it. Written in 1816, a year after his great comedy “Il Barbiere di Siviglia” and a year before his enchanting version of the Cinderella story, “La Cenerentola,” the work is a quickly patched together pastiche of bits and parts of other operas, those already written and those yet to come, a practice at which the often over-extended Rossini was adept. For those who know the Rossini canon there are many familiar passages. The overture was later used for “La Cenerentola” as was a lovely aria by the tenor, and the great quintet quotes from “Il Barbiere.”

Of course, most of us don’t know the Rossini canon that well and the fact that he raided “Il Turco in Italia,” “La Pietra del Paragone” and “La Scala di Seta,” three other works rarely performed today, might not bother us as much as they might those who knew it well, namely Rossini himself. (I cribbed those references, which I otherwise would not have recognized, from a preview by David Weininger in the Boston Globe. Would you recognize an aria borrowed from “La Pietra del Paragone”?)

After its premiere in Naples, where it served as a vehicle for a popular comic who specialized in works written in the Neapolitan dialect, it was revived only once, in Palermo, after which it was forgotten until fairly recently.

The work is a farce with a complicated plot that sounds like nonsense in summary but which makes a crackpot kind of sense on the stage. In brief, Don Pomponio, a Neapolitan stuffed shirt, has arrived in Paris with his daughter Lisetta in order to find her a husband. Without her knowing, he places an ad singing her virtues and desire for a husband in the newspaper (the “La Gazzetta” of the title – and as a victim of the slow, ongoing death of newspapers, it was a delight to see the regulars in a café devouring the latest edition of the daily rag). In the meantime Lisetta has fallen for the innkeeper, Filippo, who returns her affection. When Alberto, a world-weary would-be lover, mistakes Doralice, another hotel guest, as the woman in the ad and asks Don Pomponio, whom he mistakes for her father, for her hand, a set of confusions has been set up that ensures hilarity for the next hour and a half. Let it be added that a gaggle of Quakers and bunch of phony Turks are also mixed into the stew of insanity.

Although the opera is not an example of Rossini at his best, there are a number of wonderful set pieces.

Soon after arriving at the inn, Lisetta is visited by a dressmaker bearing her latest creations, nearly all of which the young Neapolitan buys. Twirling her cigarette holder, she sings an ode to shopping. “Yes, I am fickle/I am capricious/Only foreign fashions appeal,” she sings like a good 19th century material girl. “Long live fashion/Long live pleasure.”

In his entry aria, her father defines who he is – a conceited provincial oaf. Echoing Figaro’s famous “Largo al factotum” (“Figaro! Figaro! Figaro!”), a sensation from a season earlier, he sings that a hero like himself is not found in history; in the process of his braggadocio, he sings in French, Spanish and Calabrian dialect, mimicking each. One can imagine that Carlo Casaccio, the famous Neapolitan comic for whom the role was created, must have brought down the house with his comic exaggeration, especially of Calabrians, all of which is lost on us today.

In his entry aria, Alberto, the tenor heartthrob, defines himself as the anti-Don Juan. After traveling the world, he has not found a woman to his liking. Instead of bedding them all for the night like Mozart’s famous Don Giovanni, he turns them all down. (Maybe he really likes boys?) But he’s willing to give this Neapolitan a try.

There’s the irresistible quintet, which moves from moment to moment, each different, each delineating character, each comic in its own unique way.

In any story that so challenges credulity the evening’s success depends on the wit of the production and the skill of the performers. In both, the NEC production, which was set in 1920s Paris, was lucky. Jon Savage created a handsome set that opened with a sidewalk café that was effortlessly transformed into the interior of the inn when the action moved indoors. Katherine Stebbins’s costumes were subtle evocations of that great Parisian decade, the minor characters all in tones of gray and beige, the principals standing out in their more vividly colored costumes, Lisetta in a bright red flapper dress with a long string of pearls, her father in a preposterous brown tweed outfit complete with argyle knee socks, orange vest, beret and cape, Alberto in a yellow pull-over sweater and a blue blazer.

Joshua Major’s direction was brilliantly slapstick with enough pratfalls to cause bruises. He turned his student performers into precision comic actors, choreographing them into hilarious ensembles often indebted to the silent movies of the era. In one section of the long quintet, for instance, Don Pomponio berates Filippo, the inn-keeper, behind whom, body to body, sides to the audience, the two pairs of would-be lovers bend in unison, as if physically bent by Don Pomponio’s wagging finger.

The student cast was game, responding adeptly to Major’s slapstick direction. After this, they should have no problem in their professional lives doing physical comedy. Vocally, they were still in training. There were some lovely voices and some wonderful moments of  bel canto singing, although none of them are ready to challenge Cecilia Bartoli or Juan Diego Flores, two of the most prominent Rossinians on the stage in recent years. Special notice should be extended to Bridget Haile, who as Lisetta had the most to sing and sang it the best. After a shaky start, her voice opened nicely, promising good things to come.

In Boston, where the perpetually shaky world of opera companies is currently at a low ebb with only one small professional company mounting only four productions a year, the operas put on by local conservatories and music departments save the day for opera lovers. True, the featured voices aren’t fully mature, and care has to be taken that young voices aren’t damaged by roles that require straining. So, you won’t see any big operas by Verdi and Wagner and Strauss that require big mature voices mounted by the conservatories. Still, the experience conservatory productions offer students is essential to their development into professional singers.

The operas mounted tend to be by Mozart and Benjamin Britten, works that offer good experiences to the budding professionals, but which will not hurt their voices. It was a delight for the opera audience that the NEC chose to produce a rarely done work, highlighting a new discovery, like “La Gazzetta.”

The night I attended, the audience included many regulars among local opera fans who might not have bothered to come for another production of Britten’s “The Turn of the Screw.” True, the conservatories’ main concern is training young singers, not providing novelties for a hungry audience, but the presence of discerning opera lovers at a performance might count for something. In any case, the local opera audience owes a great deal of gratitude to the NEC, the BU Opera Theater and the Boston Conservatory. Long may they continue to mount engaging, stylish and well-sung productions of operas both familiar and strange.