His Imperial Majesty Arrives in the Mikado 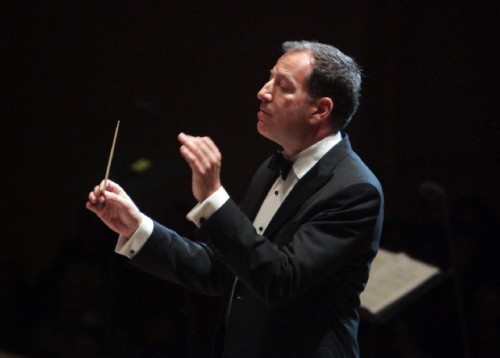 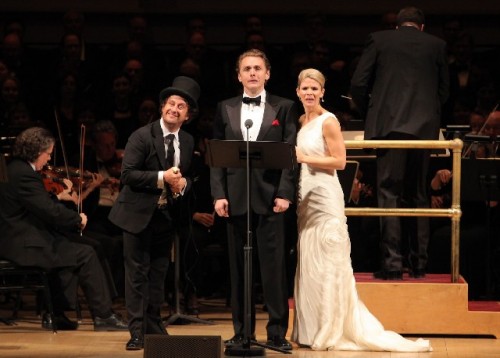 Fitzgerald, Daniely and a delightful Kelli O’Hara as Yum-Yum. 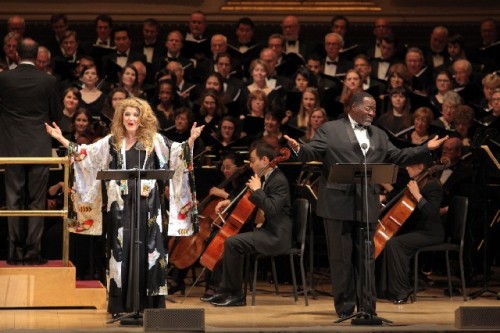 Katisha, an arranged bride to be and The Mikado.

At Carnegie, softly lit in the background by Frances Aronson, Mt. Fuji looms, surrounded by floating cherry blossoms.  The relationship between Japan and The Mikado was about as strong here as it is in Gilbert and Sullivan's conception of the operetta. Yes, the setting is the courtyard and garden of the residence of a Japanese town's chief executioner, but everything else is the Victorian England, which the composer and librettist so often described. Except of course the musical accompaniment of the Mikado's entrance in Act II, which is pure Japan.

Correspondence between the two creators at the time The Mikado was conceived was unusually sensitive and mutually respectful, not the Topsy Turvy image we often imagine.  Sullivan did not want to do an opera based on a magic lozenge that joined two improbable lovers.  He was a serious composer conducting Brahms and Beethoven.  Although he wanted his partner to give up the silliness,  he kept soothing Gilbert, telling him that he was indispensable to Sullivan's creative work, even if that meant not composing an opera seria.

As the story goes, when Gilbert looked up from his desk one day, his glance fell upon a Japanese execution sword.  Voila,  the problem of what he and Sullivan would next undertake was solved.  D'Oyly Carte was demanding a new operetta asap because Princess Ida had not been the hoped for box office bonanza.

After fisticuffs over which opera would be repeated in the fall in London, because the new composition would not be delivered until spring, both men went to work and the result was what many consider their finest work.   Every minute, in every corner of the world today, a production of Mikado is being mounted.

The Collegiate Chorale, celebrating their 70th anniversary, put on a humdinger of a production.  Directed by musical theater veteran Ted Sperling, and a cast of superb singers, who also pattered and declaimed, The Mikado seemed fresh as ever.  Spicey added lyrics,  featuring among others Newt Gingrich, were written by multi-Emmy awardee Joe Keenan.

While every performer shuffled and raced onto the stage and sang with punch and feeling, the standouts in the group were Christopher Fitzgerald, Jason Daniely, and Lauren Worsham.   Fitzgerald took off in a mood somewhere between Charlie Chaplin and Groucho Marx.  Tipping his tall hat, a prop perhaps added in case the executioner was asked to execute himself only the hat would fall to the ground. Fitzgerald presented all the facets of a man in love with his ward, an inveterate flirt, the worst crime in Japan, and his risky role as an executioner who has not killed anyone in a year.

Daniely had the most strikingly beautiful and rich voice.  The emperor's son in disguise, escaplng from an arranged marriage to Katisha, surely the most ugly bride imaginable, he sang out in always moving tones with the perfect diction so important for Gilbert's words.

Worsham stood out among the sisters, a slight edge to her singing that caught your attention, and helped give point to the goings on.

The American Symphony Orchestra was terrific under Sperling.  The Chorale itself deserves a special call out.  From the men singing "If You Want to Know Who We Are" at the opening, to the women fluttering red, blue, green and yellow fans as they anticipate the arrival of three little girls, the chorus set the story with clarity and charm.

While a Japanese village had recently been constructed in Knightsbridge, England, down the road from the authors, there is really nothing Japanese about the piece, except makeup, costumes and props. The Mikado is thoroughly British and wonderfully so. It certainly flies everywhere in the world, long since the sun stopped setting on the Brtisih Empire. How fortunate we were to have this marvel presented by the Collegiate Chorale at Carnegie.