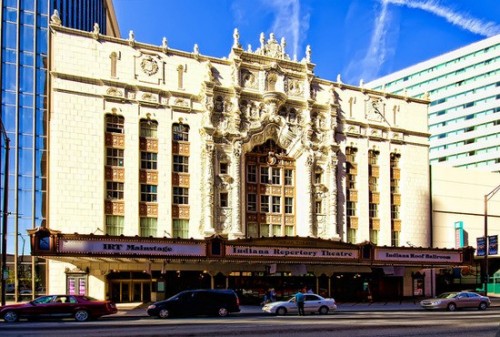 Home of the Indiana Repertory Theatre.

The Indiana Repertory Theatre has announced its season for 2013/2014. There is a great mix of shows. To buy tickets or find out more information visit their site here.

The Crucible – SEPTEMBER 17 - OCTOBER 13
It's the American classic of fear and unchecked accusation. Written as an allegory of early 50s McCarthyism, Miller’s dramatization of the Salem witch trials of 1692 has continued to resonate with generations since.
An Iliad – OCTOBER 16 - NOVEMBER 16
Homer’s saga of the Trojan War brought to life by a lone poet telling tales of human loss and folly, connecting it to our era with searing images and words of wars and bloodshed.
A Christmas Carol – NOVEMBER 16 - DECEMBER 24
The beloved classic returns.
And Then They Came for Me  – JANUARY 17 - FEBRUARY 23
Eva Schloss and Ed Silverberg, friends of Anne Frank, were caught up in the nightmare of the Holocaust but lived to tell of lives spent in hiding and the horrors of the concentration camps. James Still's most-produced play combines video and live performance to bring history to life.
Kurt Vonnegut’s Who am I this Time? – JANUARY 28 - FEBRUARY 23
Some of Vonnegut’s most endearing characters take us on a journey searching for love and identity. Stories taken from his first collection, Welcome to the Monkey House.
Other Desert Cities – MARCH 12 - APRIL 6
When Brooke Wyeth, a once promising novelist, announces she is about to publish a memoir focusing on a devastating moment in her family’s history, a Palm Spring holiday reunion is thrown into turmoil as the family struggles to come to terms with the past.
The Mountaintop  – APRIL 2 - 27
April, 3rd 1968--After delivering his magnificent and memorable I’ve Been to the Mountaintop speech, an exhausted and defeated Dr. Martin Luther King retires to Room 306 at the Lorraine Motel where he encounters a mysterious and spirited stranger.
The Game’s Afoot  – APRIL 17 - MAY 18 Acclaimed Broadway actor of the 1930s, William Gillette, invites his Sherlock Holmes co-stars to his eccentric Connecticut mansion for a Christmas Eve celebration. When one of the guests is murdered, Gillette employs the persona of the master detective he’s made famous on the stage. The danger and hilarity are non-stop in this glittering whodunit.
Back to Theatre Section Home