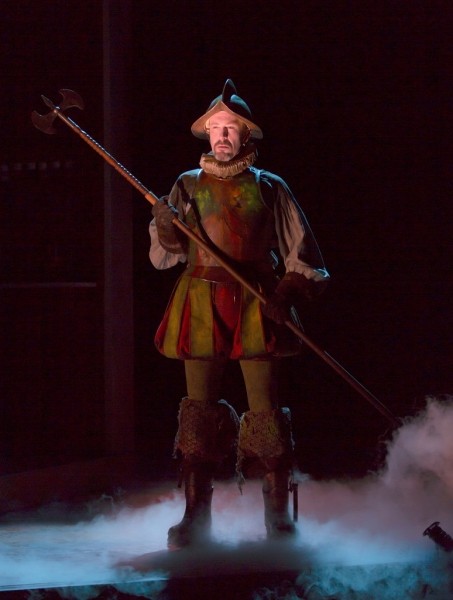 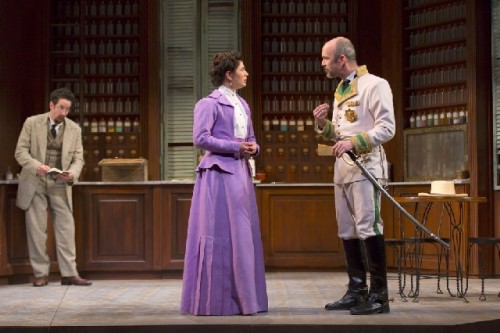 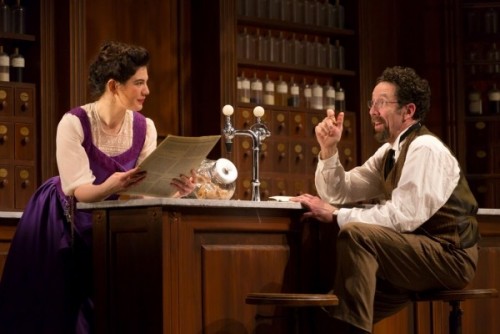 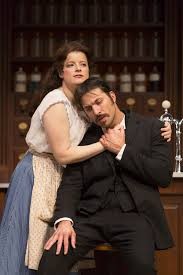 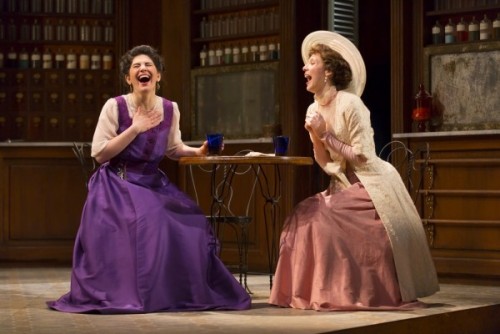 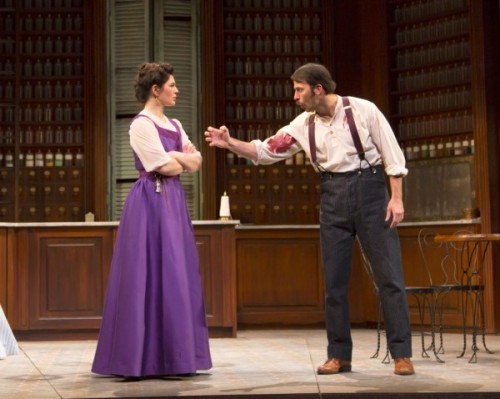 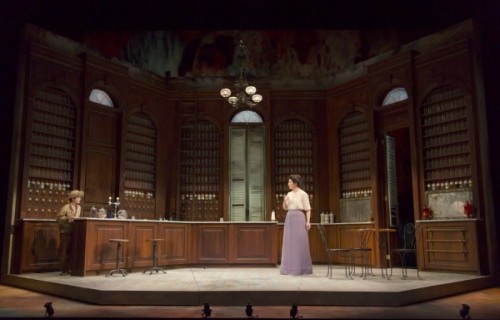 The last hundred year or so history of the island nation of Cuba is a painful geopolitical account of various major and minor internal and external acts of greed, violence, poverty and malfeasance. Some even performed by the United States.

Setting it just prior to the Spanish-American War of 1898, Playwright Melinda Lopez has told this tragic story in Becoming Cuba in very vital personal terms through a Havana family and their various simple domestic and major survival activities.

Ms Lopez, a playwright-in-residence at the Huntington Theatre this year, has cleverly and symbolically set the story totally in a Havana pharmacy in a rebellious 1897. Here the triage, medicinal cures and even placebos only treat the societal problems and underlying social/political pains and diseases temporarily. Much more must be done for a true cure.

Becoming Cuba's narrative strongly underscores that there is no real cure to the mess of harshly governing Spanish decaying sovereignty, insurgent revolutionary excess and American Imperialism. All this through the lens of a very insightful understanding of the dynamics of family members and various interconnected relationships that reflect the conflicts, contradictions and connections of an emerging nation.

Precariously balancing her profession and family responsibilities with the tumultuous times is 35 year old pharmacist Adela. She is played with beautiful elegance and depth by Christina Purmariega. Reflecting the island nation's own lineage, she is the daughter of a Spanish mother and a Cuban father who is now a rebel leader. She is also the widow of a Spaniard who was mistakenly killed by the Cuban rebels.

Her frustrated, often disrespectful and full of fun sister Martina, played passionately by Rebecca Soler, is often a charming foil to Adela's pragmatism and seriousness. The pharmacy itself is a memorial to the memory of Adela's late husband that everyone inhabits.

For good business, Adela wants to maintain cordial relations with the Spanish authorities. This is seen by her interactions with a troubled Spanish aristocratic lady customer and her devious, cruel husband, an arrogant Spanish officer. Her visiting rebel brother Manny chafes at Spanish abominations and demands that she supply the rebels with much needed and extremely hard to get medicine.

Thrown into the mix is an awkward, blundering note taking American reporter named Davis. A metaphor for the American involvement in Cuba, he is based upon the real life Yellow Journalist and Hearst employee Richard Harding Davis whose writings had great impact on the Spanish-American War.

The narrative evolves when after familial tragedy, Adela reluctantly recognizes the rightness of the rebels cause and the wrong of the Spanish authorities.

All of the performances are quite wonderful. Outstanding are Juan Javier Cardenas as the earthy Manny, Rebecca Soler as the frustrated young Martina, Christopher Tarjan as a multilayered, romantically clumsy but competent Davis and especially Christina Pumariega as an effervescent Adela.

There is a visual grandeur to Becoming Cuba. Cameron Anderson's beautiful set is a handsome 19th Century apothecary of orderly medicine and ointment bottles on extremely high shelves. It is set against swirling Caribbean abstract colors reminiscent of the deteriorating facades of contemporary Havana. Here chaotic colorful undefined shapes are just outside the orderliness of the pharmacy--the visible winds before the storm.

The lighting by Yi Zhao is poetic, while the costumes by Andrea Hood are beautiful and timely. Director M. Bevin O’Gara has orchestrated action in eloquent movement, gesture and voice.

Playwright Melinda Lopez has much to say in Becoming Cuba. The story is of a seemingly ordinary business woman, her relatives, an acquaintance and her customers. Yet, Lopez masterfully works words, events and characters meld together to tell an important piece of our all but forgotten shared history. It is set in a time and place that uncomfortably but recognizably mirrors our own.

This is a shining example of historical drama. Skillfully presented, Becoming Cuba is a vivid picture of when the ordinary become extraordinary, and just folks become heroes.