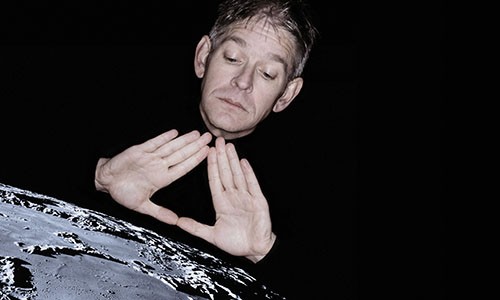 Amid his residency developing The Russian Doctor, director and choreographer Andrew Dawson presents an otherworldly family affair on Saturday, May 3, at 11:30am, in MASS MoCA's Club B-10. Space Panorama is a hypnotic solo recreation of the Apollo 11 moon landing - using only Dawson's hands!

From the space shuttle's terrestrial takeoff to its lunar landing, Dawson transports viewers through a dramatic narration, accompanied by Russian composer Shostakovich's No. 10 symphony. The majesty of man's first mark on the moon is recreated by the deft and dexterous hands of the actor/move-ographer/theater-maker - a tour de force performance certain to astound viewers of all ages. With wit and charm, Dawson masterfully mimics the entire experience of the landmark space mission from multiple perspectives, seamlessly transporting viewers from the vantage point of an excited onlooker to the extraterrestrial traveler.

About Space Panorama, The Guardian says, "It must be seen, if only for the mobility of Dawson's hands, which play all the parts from rocket to moon lander. Great fun."

Acclaimed director and choreographer Dawson has performed Space Panorama in theaters throughout the world since 1987, including the 40th anniversary of the Apollo 11 landing at the Kennedy Center and an astronaut dinner attended by Buzz Aldrin, one of the two men to initially navigate the lunar surface in 1969. A student of dance and theater, Dawson teaches the Feldenkrais Method of somatic education to top schools and art labs in the world, most recently the Barbican Arts School Lab. He is also a prominent hand model featured in television commercials and other advertisements for companies such as Honda, Budweiser, and McDonalds.

Dawson's performance of Space Panorama comes during his residency developing The Russian Doctor, a theatrical new work crafted around the astounding exploration made by the literary giant, Anton Chekhov. In conjunction with long-time collaborator and neuroscientist Jonathan Cole, Dawson teams with medical historian Marius Turda to explore an oft-forgotten element of Chekhov's legacy. In his only literary work of non-fiction, Chekhov took great risk to tour the Sakhalin Islands to speak to thousands of people in order to categorize disease and living conditions, in one of the most extensive epidemiological studies of the 19th century.

Lunch and snacks are available from Lickety Split. Tickets are $5. Members receive a 10% discount. Tickets are available through the MASS MoCA box office, located on Marshall Street in North Adams, from 11am to 5pm (open every day except Tuesdays). Tickets can also be charged by phone by calling413.662.2111 x1 during box office hours or purchased online at massmoca.org.