The Christians by Lucas Hnath 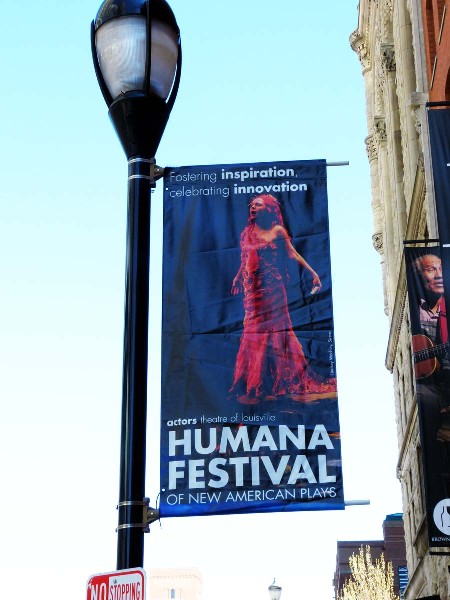 Banner for the Humana Festival in Louisville. 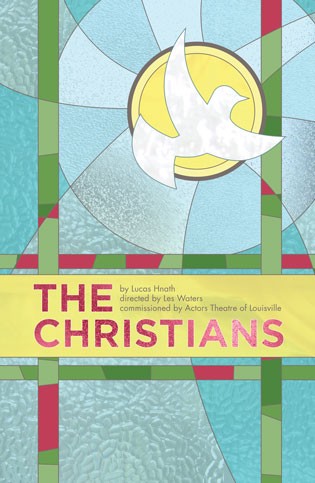 Poster for The Christians. 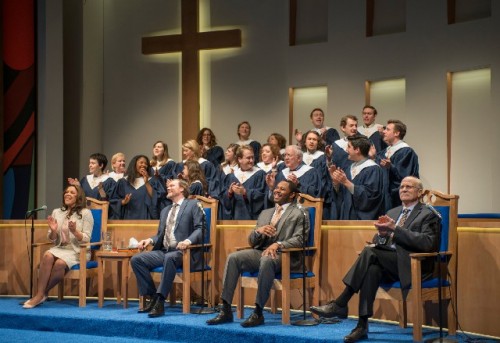 The congregation of Pastor Paul. 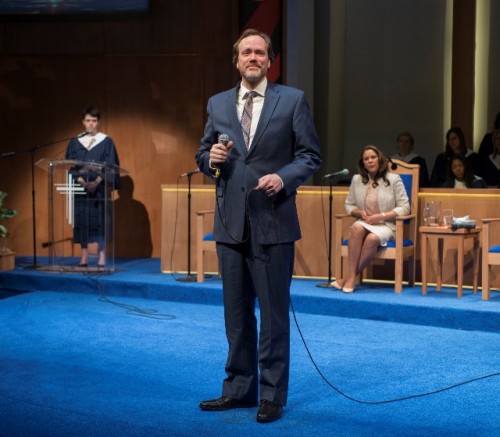 Andrew Garman as Pastor Paul wants to lead the church in a new direction. 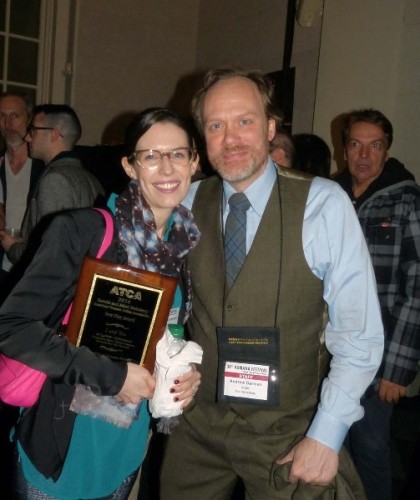 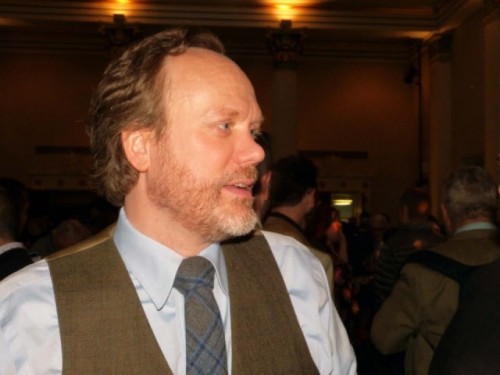 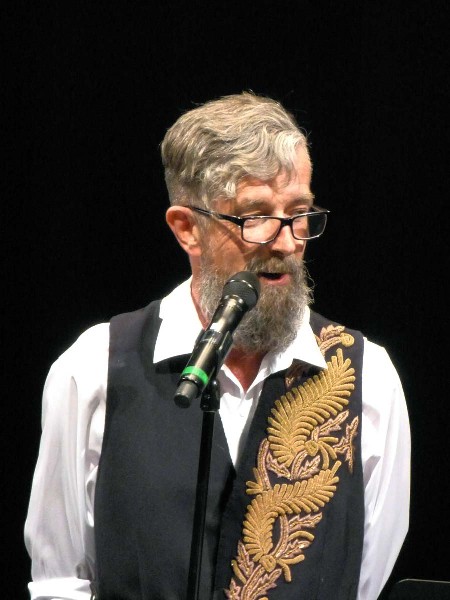 The Christians was directed by Humana’s artistic director, Les Waters.

Facing a blandly generic but obviously contemporary and expensive mega, non denominational church the initial response was that it is a place where I definitely do not want to be.

Even when the large gowned choir bust into gospel music with appropriate seizures of faith and rhythmic hand clapping. They were enjoying themselves while I was not.

The trials and tribulations of an evangelical church are a topic for which I have little or no interest. However briefly, when channel surfing, I slip and slide past the TV ministers and their fervent evocations of heaven and hell.

Long ago I resigned myself to hell if there is one.

Sartre said it best “Hell is other people.”

The most I could hope for was broad satire and witty comedy. Perhaps like the hilarious and wonderful “Jerry Springer The Opera” which was saw some years ago in London.

Making the most of some 80 minutes of a church service I did not want to attend something happened. A quite interesting and possibly brilliant play by Lucan Hnath broke out.

During a marathon of new plays at the prestigious Humana Festival in Louisville, Kentucky this was the one with the biggest buzz among members of the American Theatre Critics Association which held its annual conference in Louisville.

There are several high backed, ecclesiastical chairs before a low wall in front of the choir. They seat the Pastor, Associate Pastor, Pastor's wife, and a Church Elder. Next to each is a microphone with which they converse and address the congregation. Before them is a broad curved, wall to wall, carpeted sky blue expanse. There are enormous minimalist crosses at the back of the stage flanked by mega screen monitors which show God signified by sunsets and snow white Holy Ghost evoking doves.

Can I have an Amen.

This is the mega congregation which Pastor Paul (Andrew Garman) has nourished and built from store front to sprawling complex with school, gift shop, and baptismal font as vast as a swimming pool.

He announces that all of this glory in the Name of Jesus is, praise the Lord, now debt free.

In a four part power point sermon, however, he wants to lead the flock in a new direction.

There is the moving telling of a young man who charged into a burning building to rescue his younger sister. He gave his life in the effort.

But, because he did not accept Christ as his savior, this good soul would not reside forever in Heaven.

To Pastor Paul this seems just not right. Further, he no longer believes that one must accept Christ to gain salvation. From his literal reading of scripture there is no specific reference to hell.

The Associate Pastor (Larry Powell) wants to know more before following this direction. That results in a debate and exchanges of Biblical quotes. It is a fascinating and intense point counter point.

Pastor Paul insists that Hell is in fact the ancient Hebrew word for the fire outside the city which was used to cremate the dead.

Ultimately, however, his new interpretation is unconvincing. The Associate Pastor leaves with a small group of followers.

A congregant, with self conscious hesitation, has further questions for Pastor Paul. She is not a Biblical scholar but in good faith feels deceived and betrayed by his ministry. After this exchange she leaves followed by the entire congregation.

There is a downward spiral leaving him alone in a now deserted church.

Under the skillful direction of Les Waters and a compelling performance by Andrew Garman as Pastor Paul we experienced a remarkable evening of theatre. Yes it is about that thorny American topic Christians. Beyond that it evokes a complex midlife crisis of faith. This is an issue that strikes to the heart and soul of all of us. What happens when we risk everything we have struggled to accomplish because we no longer believe the premises that got us there?

Pastor Paul is an everyman who follows the road less traveled.

Hopefully this fine play will find a life after Humana.