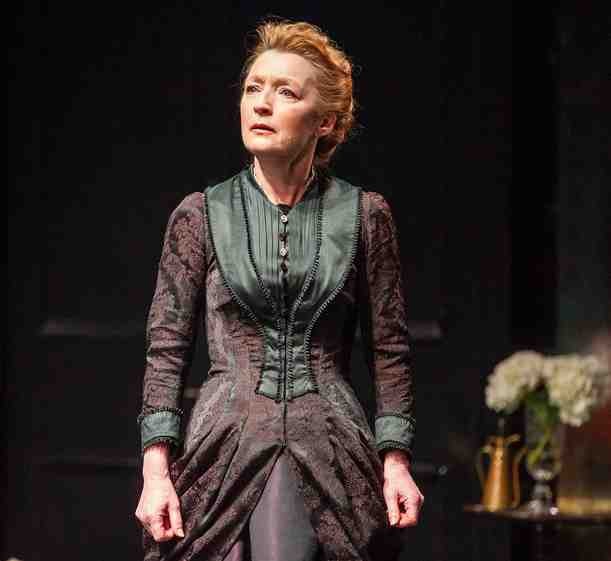 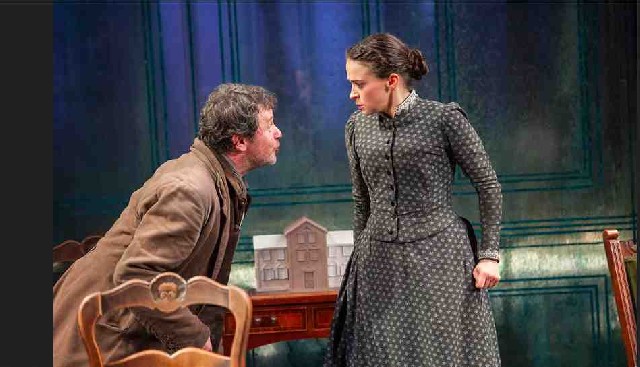 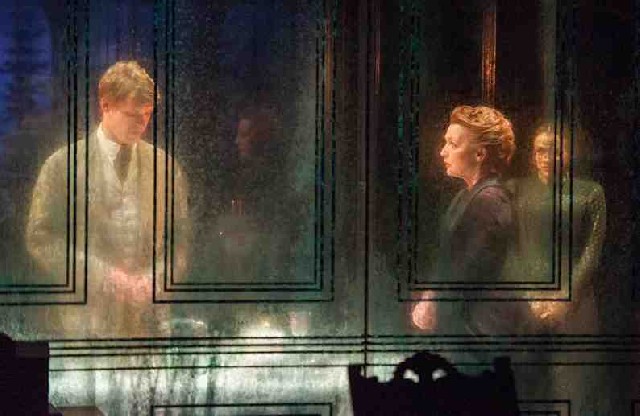 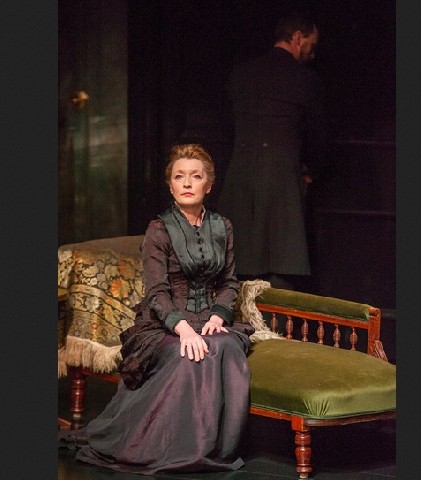 Richard Eyre’s fresh and visceral take on Ghosts brings powerfully to the stage not a play set at the end of the 19th century, but a play which resonates in any time present.

Immediately announcing the poetics of Ibsen’s work, Tim Hatley's set recedes from the front stage parlor, which is subtly and often surprisingly mirrored in glass dividers with a conservatory/dining room behind, and then the front door which opens on to a grove of Norwegian pines.

As poetry is often metaphor, we immediately see the outside world hovering over the inside one, where the most intimate details are revealed.  The play occurs in one fell swoop without division into acts.  Eyre has emphasized the heart  of the matter from start to finish.  People act and move instead of sitting their way through a scene.

The entrance of Jacob Engstrand, carpenter, muscled out by Brian McCardie, immediately alerts us to the more physical staging about to unfold. Trying to engage his daughter Regina, who works as a servant in the Alving home and demand her return home with him, Jacob lifts his fist and implants a fully-splayed hand across Regina’s face.  Jacob was never tame, but now we feel this and see it.

Charlene McKenna as Regina catches the eye quickly. She is sexy, knowing and hardly fits the servant role it turns out she was not born to. Cat and mouse play. Neither father nor daughter wins.

McCardie triumphs in the director Richard’s Eyre directorial take. His modus operandi is deployed by many successful people today: Gather information and then use it to your advantage. Time and again he will use information to get jobs and sacks of money. He holds all the cards and  knows all the secrets.

Fewer women are now trapped by money and power, but we may be the fools.

Mrs. Alving, played with ineffable grace and humor by the petite powerhouse Leslie Manville, has been tortured by such a path. Her first love, the Pastor (Will Keen) remembers their lust. But it is Mrs. Alving who invites his hand to her breast, and the upright Pastor who resists.

Will Keen puts spine in the Pastor, who gains strength in the presence of his first love. Mrs. Alving was forced to leave him for her parents’ choice.

All the characters in the play are developing, part of the story of the 20th century. We are not bound, except in our genetic heritage, which it is best to know. Or is it?

Billy Howie captures Oswald, the Alving son, perfectly, as he descends into tertiary syphilis.  Oswald learns in the hardest and cruelest way what it is to be bound to a past ghost. He bears no responsibiity for this deadly disease he inherited from his father at birth.  Until the play’s end he imagines it to be the consequence of his own actions. In this case, the course of his life may have been no different had he known.  Today we have a choice: there are readings of the genetic map and the massive histories taken when you begin a medical record.  Syphilis was curable after Dr. Ehrlich discovered its spirochete (25 years after Ghosts was written).

While most of the action of the play takes place in the parlor, one can peer through to the more muffled action of the conservatory: a flirtation between Oswald and Regina, for instance.

In the parlor, people know or come to know who they really are and what they have to live with.

Piled on the table are the books Mrs. Alving is reading. The pastor questions their selection. They are progressive views of the world Mrs. Alving is trying to grasp.

As played by Manville, Mrs. Alving has come to know herself. To recognize the havoc her choice has wreaked, yearning for the truth above all. When asked to do an unimaginable act of love for her son, she is able to act with crushing beauty and pain.

The sky has turned blood red outside and floods the full stage at this moment.  Oswald, who has called for 'the sun' now has it.  Truth revealed in this powerful production at the Harvey Theatre.