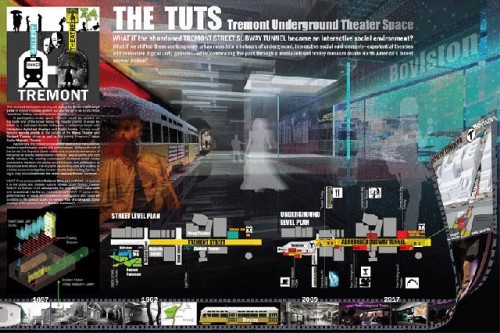 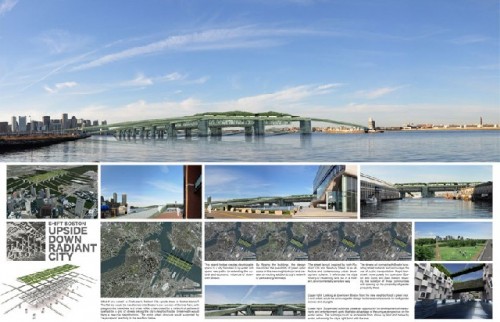 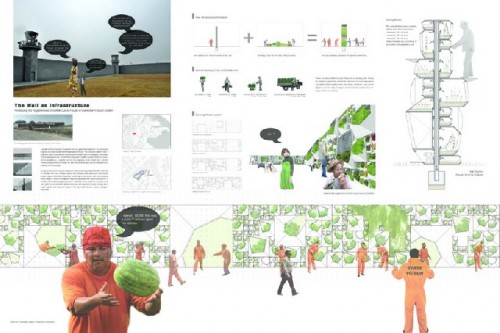 Runner-up, The Wall as Infrastructure 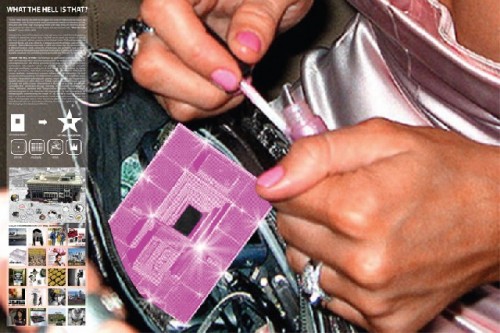 Honorable Mention, What the Hell is That? 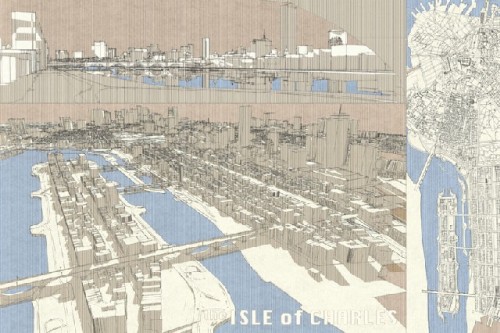 Finalist, Isle of the Charles 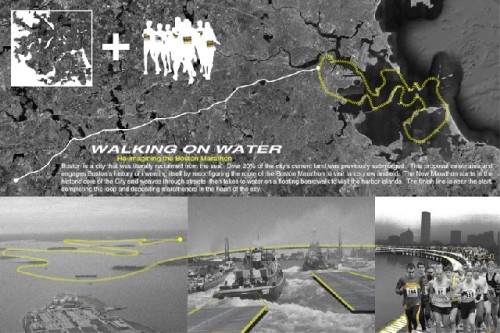 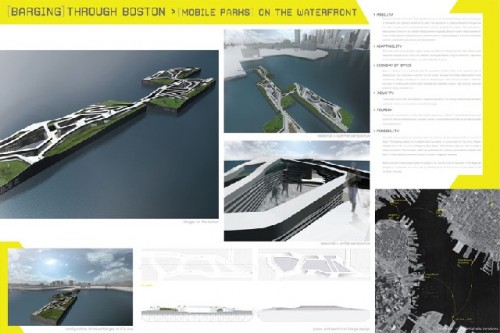 In response to the review by Mark Favermann of the recent SHIFTboston urban design Competition, Kim Poliquin, the Executive Director of SHIFTboston wrote the following.

Dear Berkshirefinearts,
Thank you for writing the review - it looks great - you covered the event in great detail which is so nice to see. I understand your argument about the jury selection and the winner, but must say, we had a wide-range of jurors and almost all of them selected TUTS (Tremont Underground Theatre Space, the winning entry). Our seven jurors were from different locations and 2 were outside of the USA. All of the jurors were of different age groups and of unique disciplines within the architectural and urban design professions. For some reason they all chose TUTS!

Anyway please feel free to contact me if you have any additional questions about our organization. Please let me take a moment to explain a bit more about my organization, what we are doing and why.

SHIFTboston, an aggressive urban campaign which I founded one year ago to engage the public along with both city and state officials.  It is our mission to promote a dynamic and responsible future for the city with a goal to inspire and encourage a broad awareness of the importance of the urban environment. Our campaign consists of four primary components: a blog, an international ideas competition, a public forum, and exhibitions.

The SHIFTboston 2009 International Ideas Competition was launched on September 28th. We asked competitors to tackle the question 'WHAT IFÂ…?' this could happen in Boston. Can we challenge ourselves to think about what COULD BE in order to promote an essential and necessary SHIFT in the way we engage our shared urban environment here in Boston? As a result of this question, there has been a wonderful flow of new ideas.

We are now driving a constructive agenda for the future of Boston, based on the trends that ran throughout the submissions. Our agenda is clean energy, technological advancements, urban adventure, and urban ecology - which includes urban agriculture growing and farming in the city.

We are currently organizing several exhibitions throughout the city to promote these trends and to provoke thought on what could be. Here are some other things we are planning:

Â• A small wetland habitat in the Fort Point Channel

Â• A series of storefront displays around the city

Kim Poliquin
Executive Director
SHIFTboston
www.shiftboston.org
Mark Favermann responds:
SHIFTboston is doing leadership work that should have but has not been taken up by the Boston Society of Architects (BSA) or the Boston Redevelopment Authority (BRA). They are trying to develop a visionary yet accessible approach to 21st Century urban design in Boston. Their first competition, despite its good, bad or indifferent "winners," has strategically opened a civic dialogue, a creative conversation that focuses attention on the City of Boston, on its neighborhoods and its 21st Century opportunities and potential.

Through their recent competition, this urban design organization makes the case that urban design and urban enhancement are ingredients in the civic experience that should thoughtfully and enthusiastically be approached. SHIFTboston also underscores the notion that urban design may be best implemented incrementally rather than in major segmented ways.
With that all said, it appears that many of the prize winners and finalists were chosen out of context and with little or no understanding of the very local aspects of the environments, sites and situations that were proposed for change in Boston.  The jurors seemed too often to just not to get it. The winning entry, Tremont Underground Theatre Space (TUTS) is a weak urban design statement on a number of problematic levels.
First, what need does this project actually serve or solve? Are there a lack of venues in Boston for art galleries and theatre spaces? With the Great Recession, many existing cultural venues are struggling. It would be easier to retool them than to build this below the surface rather redundant cultural center. Does being underground create an exciting, stimulating setting or more probably set up major, environmental problems, security issues and even political conflicts, not to mention ownership considerations.
This project is to be located in an abandoned former subway tunnel owned by the MBTA, a state agency of the Massachusetts Department of Transportation. We all remember what a great cost-effective job their colleagues did during the much lamented, over budget Big Dig. The City of Boston will have little ir no jurisdiction over the venue and therefore receive no tax revenues from the space. With a less than wonderful record of care and innovative thinking, the Commonwealth of Massachusetts will be responsible for it. All of this is in the name of responding to underused or decaying infrastructure.
Several of the other finalists strike discordant notes as well. An awkward realignment of the venerable Boston Marathon, more of an academic exercise than a thoughtful design, and an urban farming idea that uses transitory prison labor to share agricultural tools are two of the most misguided. However, the fact that there is criticism, discussion and some controversy around the competition's submissions add to our civic conversation and our urban debate.
SHIFTboston asks, "What if? Why not? and Suppose?" Even if we disagree with many of the competition's selected proposals, this is a great way to consider our future city.
Back to Architecture Section Home