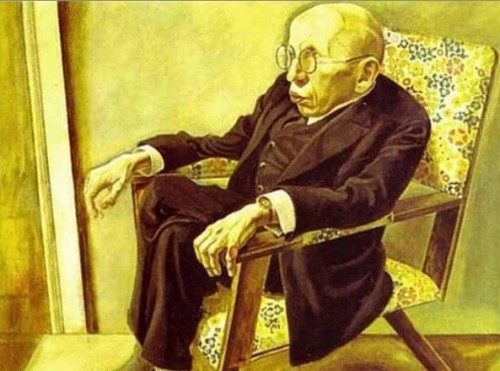 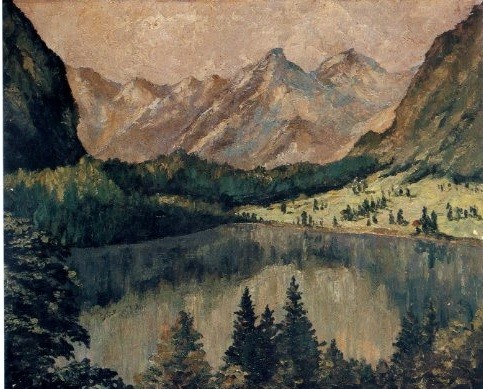 A Hitler painting, not on exhibit at the Neue. 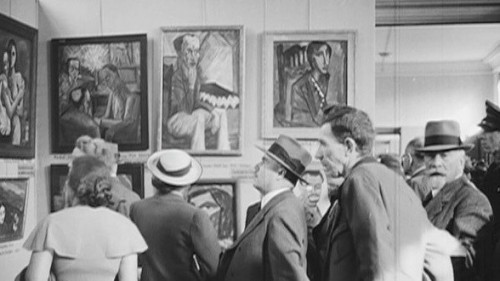 The Nazis seized ‘degenerate art’ from museums and private collections. A three-year traveling exhibition of this art toured Germany and Austria. Most of the paintings were sold, lost, or presumed destroyed. The recent discovery in Munich of the Gurlitt trove of such artwork has attracted attention. The film The Monuments Men, directed by George Clooney, is about the seized art.

Who has the right to determine the socially redeeming value of art?

Rudy Giuliani, then Mayor of New York, stepped into the fray when a portrait of the Virgin Mary mounted on elephant dung by the British artist, Chris Ofili, from the Saatchi Collection was hung in the Brooklyn Museum of Art.

The Museum received public funds, and this very much complicates the issue. The Mayor threatened to withhold funding.

Artists who work on their own and don’t draw from the public dole have a right to do what they want, certainly a First Amendment guarantee in the US.

But in the Third Reich the case was quite different. Der Fuehrer knew that art was important. He was a mediocre, failed painter. US leaders have been artists in their own right: Presidents Ulysses S. Grant, Dwight D. Eisenhower, Jimmy Carter and George W. Bush all have painted, with varying success. What their taste in the work of others was and is, we don’t know. They consider it private.

In the process of elevating the German population and purifying it, Hitler chose to be arbiter of the public taste. Movements which civilized viewers consider seminal were removed from sight and buried. But there was a last moment for the German public to view this ‘degenerate’ art in the traveling exhibit.

Steven Spielberg provided funds to preserve a fascinating film clip of German citizens walking through the exhibit. Their reaction seems to be fearful, taking a quick look over a shoulder to see who’s watching them looking.

Stanley Kramer fictionalized a question that anyone curious about the course of history raises: who knew what when, and if they knew, why did they not raise a voice?

In the film "Judgment at Nuremberg," a German judge of great legal depth (Burt Lancaster) turns the tribunal on its head. When his legal representative begins to use the very tactics Lancaster did to make the truth of a witness appear to be false, Lancaster will not let this happen again. At the end of the trial, sentenced to life in prison, he asks for the head of the tribunal to visit him. Spencer Tracy visits. Lancaster explains that he had no idea what went  on in the concentration camps. “But,” Tracy says, “You knew a witness was innocent, and you forced a conviction. Once is too much.”

Footage of the real Nuremberg trials is in the Anthology Archives in New York. John Ford’s camera offers a chilling insight into the men who forced even the Nazi artist Emil Nolde to leave the country.

Nolde is interesting, because the Third Reich hated his art more than they loved his party allegiance.

The Neue Galerie is one of New York’s treasured exhibition spaces and provokes as well as pleases. This exhibit is an unusual and important insight into a world we do not want to recreate or forget.