Chihuly at the MFA a Glass Act

Bellagio on the Fenway 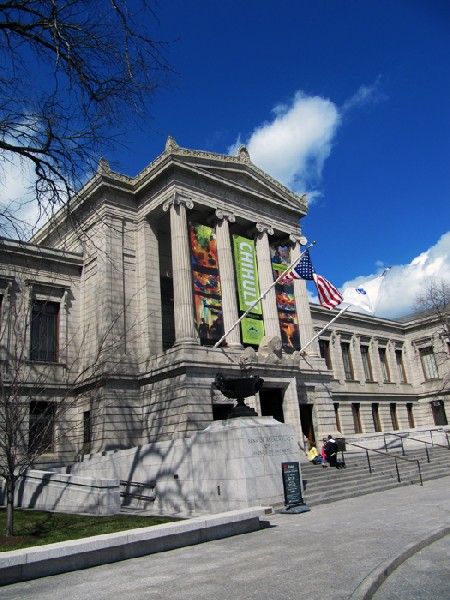 Banners for the exhibition adorn the entrance of the venerable museum. 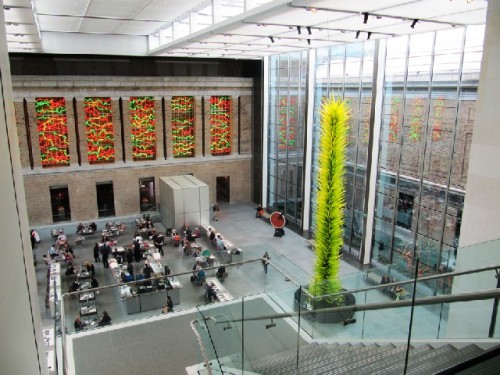 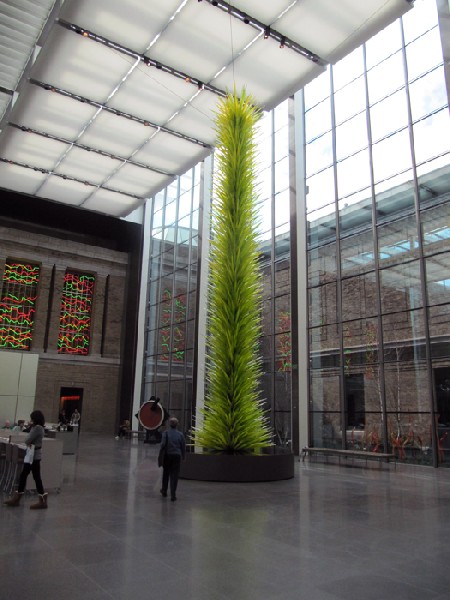 The Globe critic, Sebastian Smee, suggests it become a permanent fixture in the atrium. 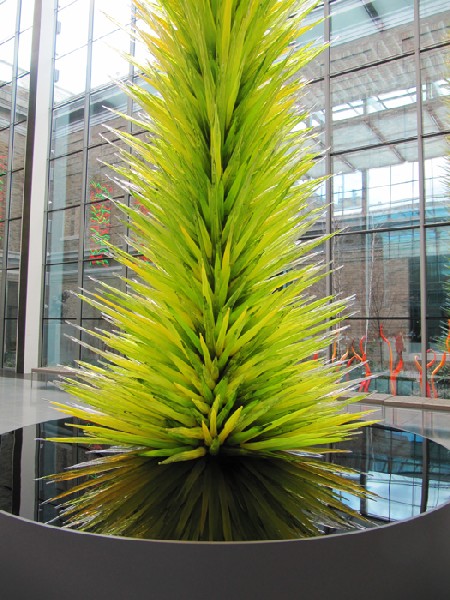 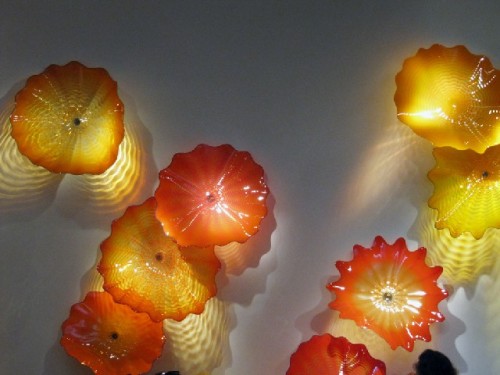 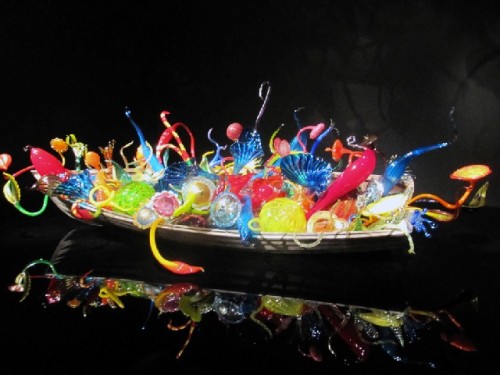 A glass filled barge crosses the Styx of glitz. 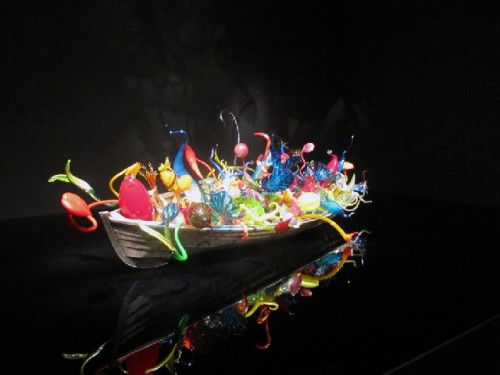 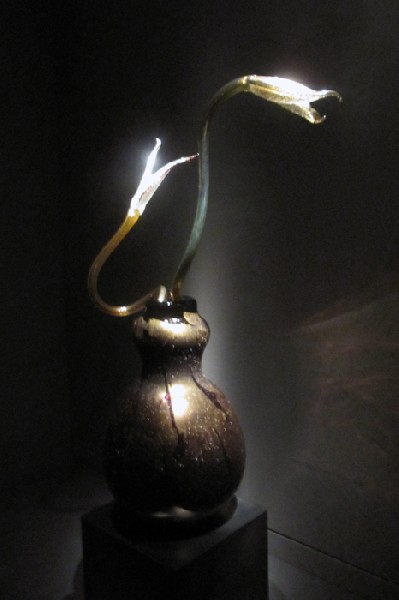 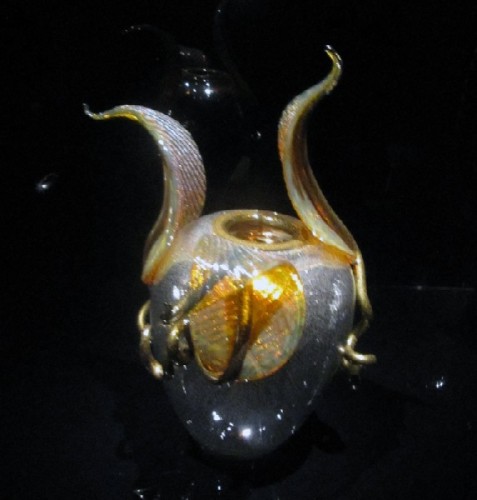 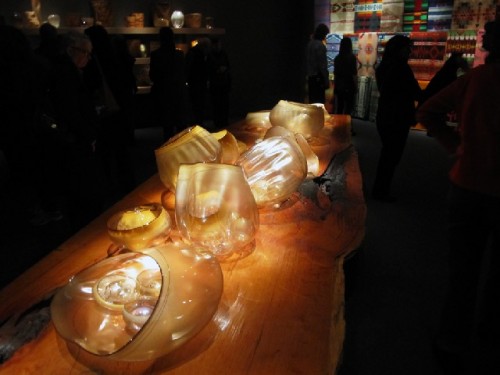 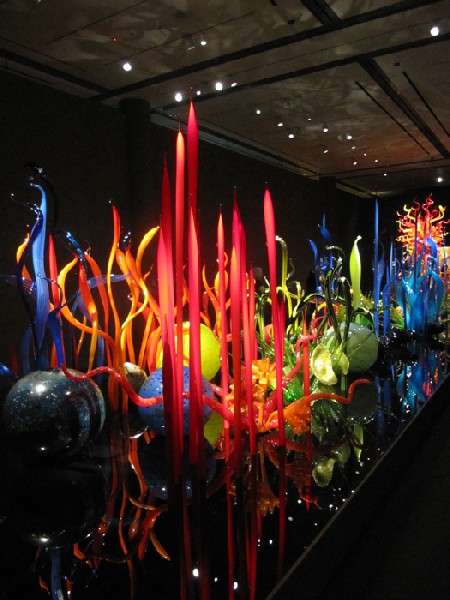 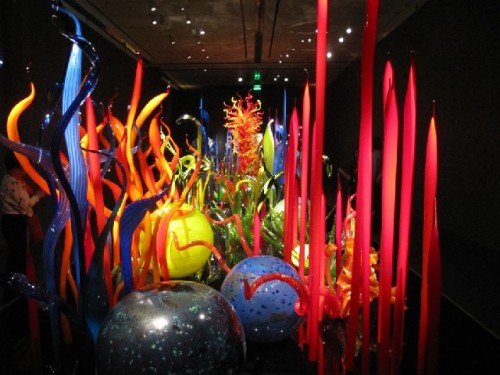 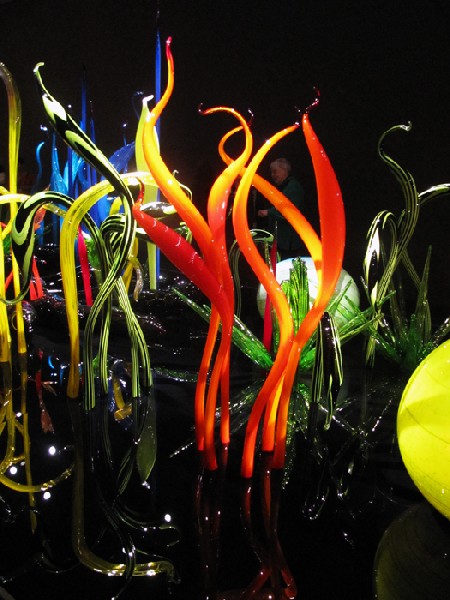 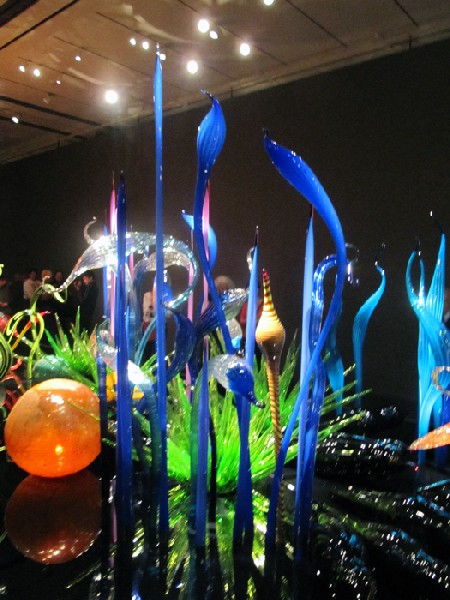 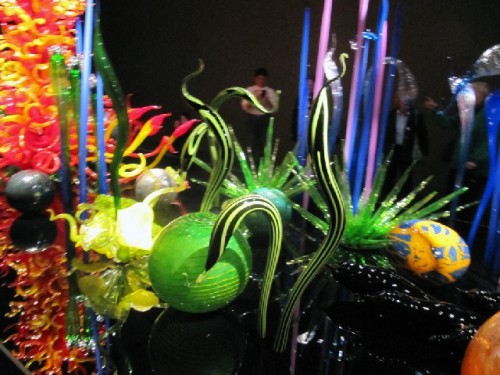 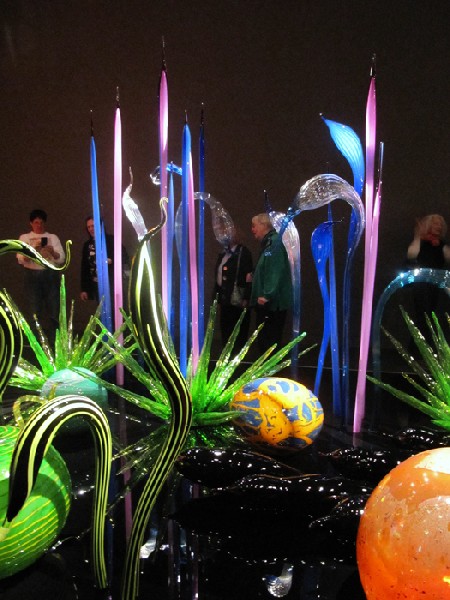 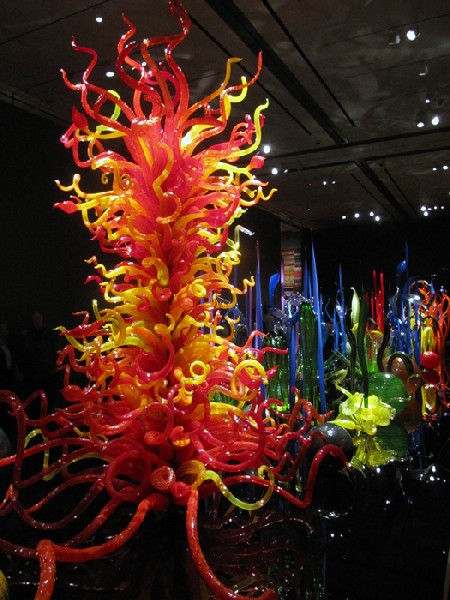 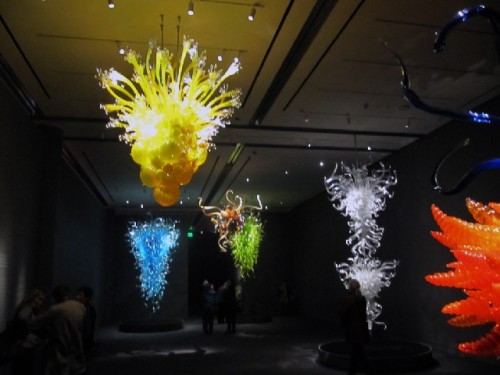 Overview of the gallery. 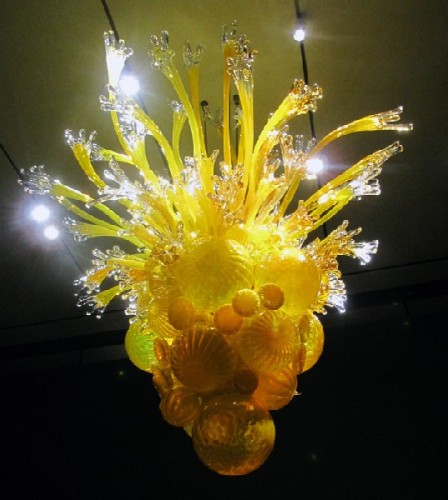 Explosion of color and light. 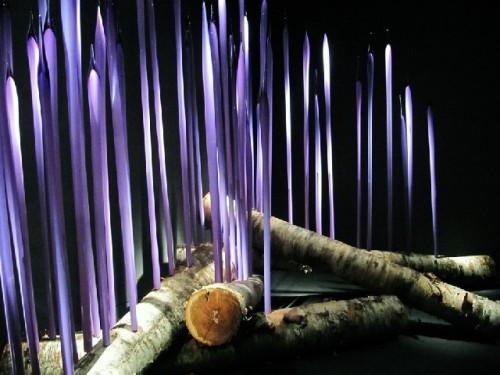 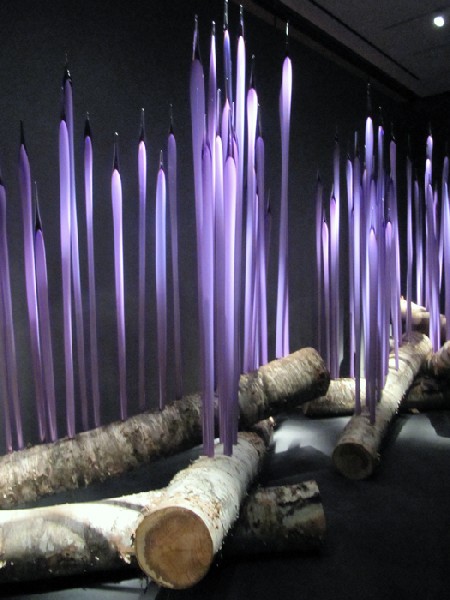 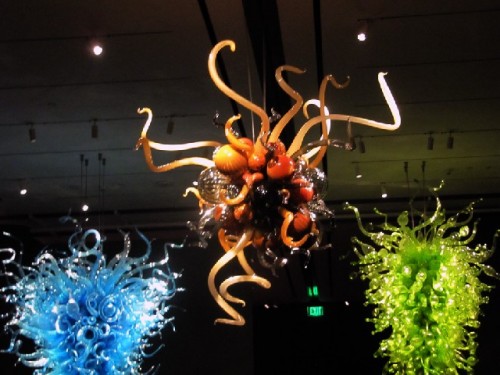 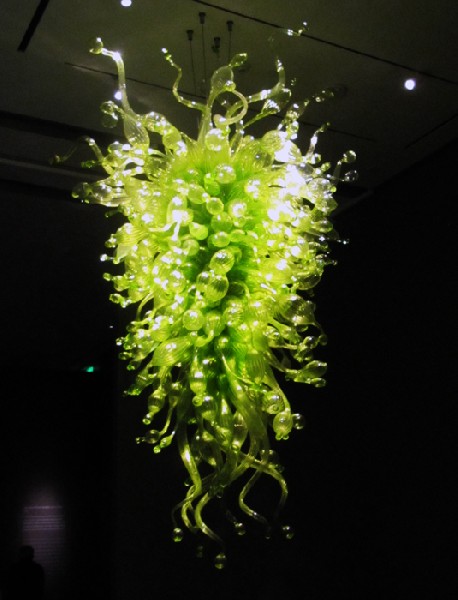 Strange creatures of the night. 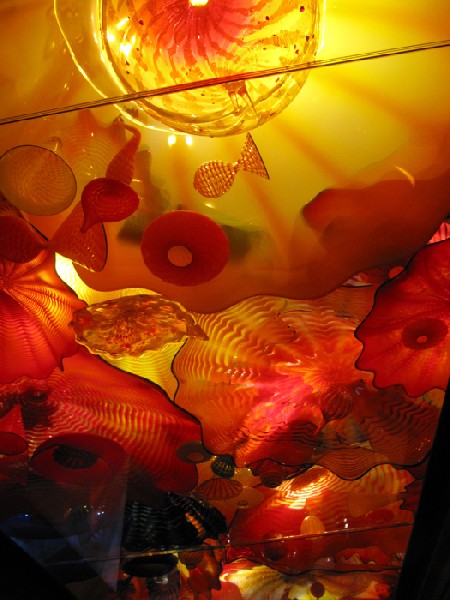 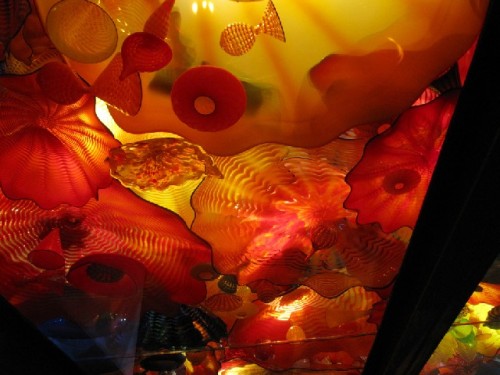 With the special exhibition by glass sculptor Dale Chihuly “Through the Looking Glass” (April 10 to August 7) the casino bling and blang encountered at Bellagio is now on view at the venerable Museum of Fine Arts, Boston.

It seems that MFA director and three ring circus master, Malcolm Rogers, has done it again. The populist/ vulgarian who previously presented cars and guitars this time brings Vegas to the Fenway.

Really Malcolm, how could you. What happens in Vegas stays in Vegas.

There is no gamble, however, in this sure bet blockbuster serving dazzling eye candy to the awed masses.

While bantering about defining the term “taste” even the Boston Globe critic, Sebastian Smee, appears to have been blown away.

“Called “Lime Green Icicle Tower,’’ it’s a bristling 42-foot column sprouting quills of glass. It looks so good it’s hard to imagine that Malcolm Rogers, the MFA’s director, will not find a way to keep it there long-term” Smee gushes describing a tower of Babel that reaches into the stratosphere of Lord Norman Foster’s otherwise enormously bland atrium.

What’s not to like about one spectacular gallery after another filled chock a block with Chihuly’s squiggles and swirls of monumentally scaled blown glass?

Or, as Smee argues, it’s a matter of taste. Or the lack thereof.

Stating that more or less pigeon holes me as an elitist, high brow, snob.

As my mother used to say “Better a snob than a slob.”

Don’t get me wrong. Chihuly is the absolute master of his medium. He has completely redefined and updated the ancient technique of blown glass. Under his artistic vision glass has expanded from precious, fragile object to enormous, zany, ersatz organic sculptures and installations.

There’s a long boat full of baubles updating Gericault’s Raft of the Medusa. A forest of vertical forms floating up from a stack of enormous birch logs. A virtual world of undersea creatures shimmering about. Or overhead a glass ceiling.

A Yellow Brick Road leading straight to the gift shop to stock up on chatchkies.

What does it mean?

Why does this work which seems perfectly awesome in a Vegas casino feel so dead wrong in a world class art museum?

Isn’t there a law against pandering?

Yet again the MFA has lowered the bar to ground level for the masses to waltz over.

Rather than enlighten and educate its audience the museum’s mantra is “Let them eat cake.”