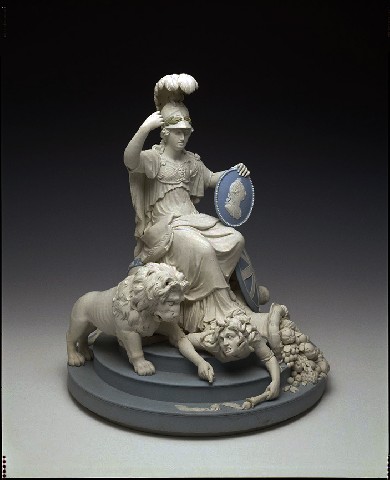 Among the 10,000 pieces is this â€¨blue and white jasperware centerpiece, entitled Britannia Triumphant, produced between 1798 and 1809, for the Prince of Wales, later George IV. The figural piece commemorates British naval victories over Napoleonâ€™s forces and features Britannia as Minerva, the British Lion, and the fallen figure of France. A profile of George III is emblazoned on the shield. Image courtesy of the Birmingham Museum of Art.

CERAMICS TRIUMPHANT IN ALABAMA: A WEALTH OF WEDGWOOD AT THE BIRMINGHAM MUSEUM OF ART.

Within the Birmingham Museum of Art, a charming parquet-floored, yellow-walled gallery contains the largest collection of Wedgwood ceramics in the United States. The 10,000 pieces the museum holds, thousands of which are always on display, is comprised of the Dwight and Lucille Beeson Wedgwood Collection and the Buten Wedgwood Collection, each lovingly assembled over decades and donated separately.

The Beeson Collection concentrates on the Josiah Wedgwood and Thomas Bentley partnership period (1769-80) and reveals the development of Wedgwood pottery from the red stoneware produced in the 1760s to the work of Emile-Aubert Lessore produced until the 1870s. The Buten collection, focusing on the 19th and 20th centuries, includes examples of all types of objects made by the factory, in all media, and with all types of decorations. Together, the Beeson and Buten Collections provide an invaluable resource for the study of one of the most important ceramics manufactories in history.

Among the rare pieces in the BMA collection is a circa-1790 Wedgwood copy of the Portland Vase, a Roman cameo glass vase dated about AD 5-25. Sir William Hamilton, the British ambassador in Naples, purchased the vase in 1778 and brought it to England, where it was later acquired by the 3rd Duke of Portland. In 1785, the Duke loaned the vase to Josiah Wedgwood, who produced a perfect copy of the vase, not in glass but in jasperware.

Beginning in 1790, Wedgwood issued "first-edition" copies, only a handful of which exist today. The Birmingham Museum of Art has two, each made during Josiah Wedgwood’s lifetime. One is a black copy, numbered by Wedgwood himself; the other is one of only five known slate-blue examples. (The original Portland Vase has been in the British Museum in London since 1810.)

MORE THAN BLUE AND WHITE.

Anne Forschler-Tarrasch, Ph.D., The Marguerite Jones Harbert and John M. Harbert III Curator of Decorative Arts at the Birmingham Museum of Art, said, “We are very proud to house the largest collection of Wedgwood in the country – and really the only collection of its kind in the US.  Although most people think of the stereotypical blue and white when they think of Wedgwood, the factory is and always has been so much more.  I spend a lot of time with our Wedgwood collection in my day-to-day work and have come to truly love the company and its products.  Josiah Wedgwood was such a visionary and the wares he created embody the period in which they were created so well.  Every time I go into our gallery or into our Wedgwood storage space I see new things.  I am always surprised at the great variety of objects and types of ceramic that Wedgwood produced, and at the range of artistic creativity behind the works.  I really have the best job in the world – working with a collection that is so fascinating and has so much to offer.”

WEDGWOOD IN THE LIBRARY.

The museum’s Clarence B. Hanson, Jr. Library contains the Chellis Wedgwood Collection, the largest special collection in the world related to Josiah Wedgwood and his manufactures, and is the U.S. center for the study of Wedgwood. Among the library holdings are Sir William Hamilton’s Collection of Engravings from Antique Vases, known as the Hamilton Folios, the first European color-plate books.

The Birmingham Museum of Art is located at 2000 Rev. Abraham Woods, Jr. Blvd. North, AL, in the heart of the city’s cultural district. More information may be found at http://www.artsbma.org or by calling 205-254-2565. General admission is free.