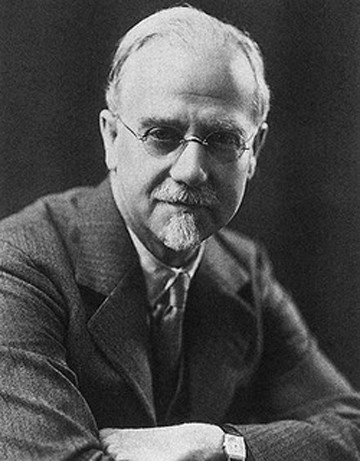 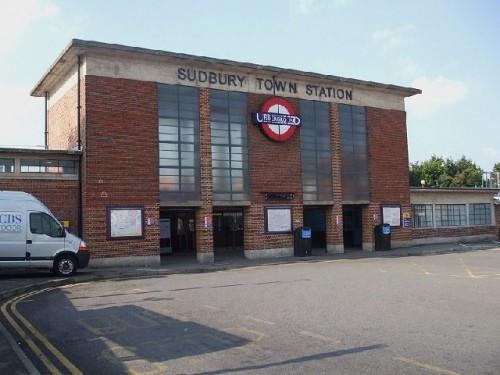 The first of the new 'brick box with a concrete lid' stations, Sudbury Town Station by Architecture Charles Holden, 1931 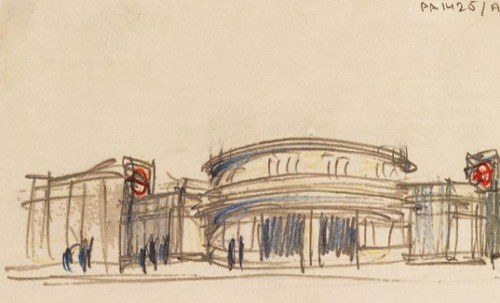 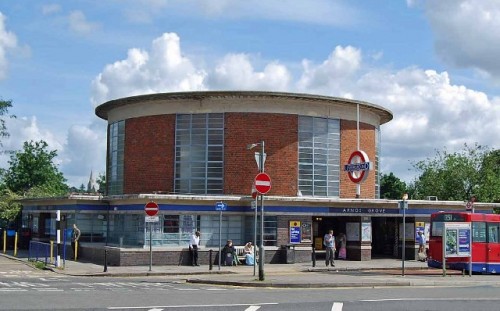 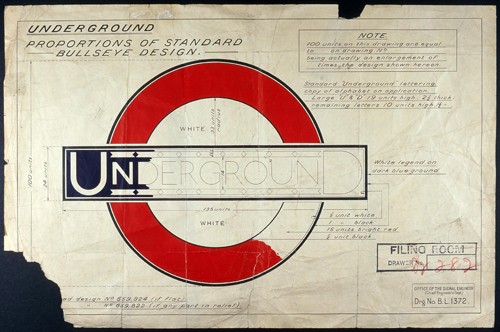 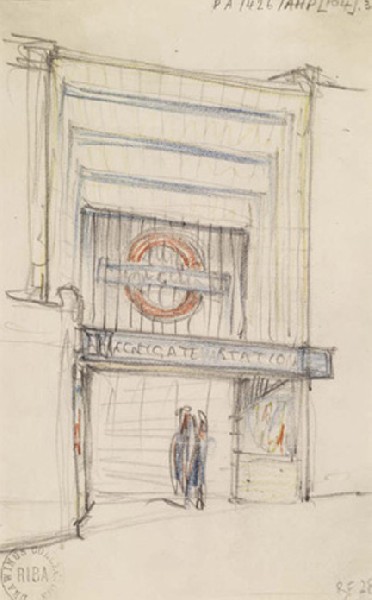 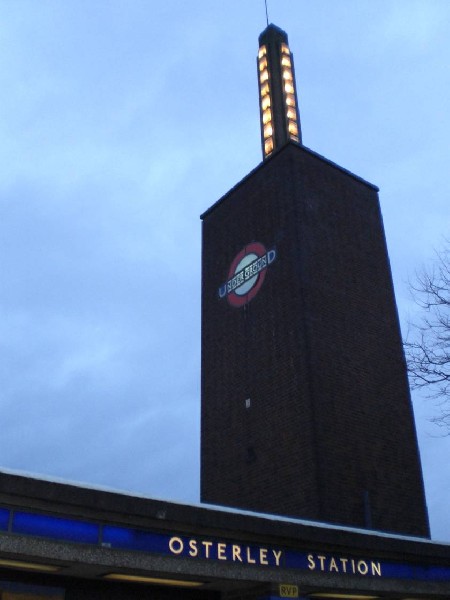 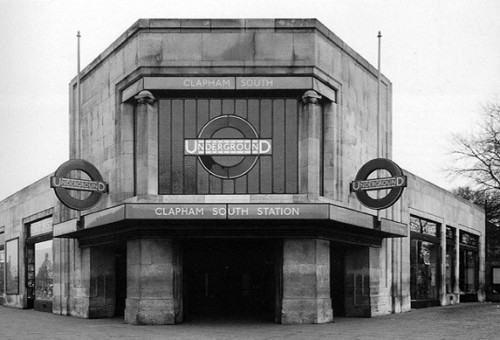 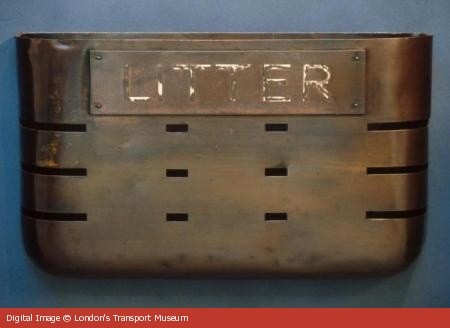 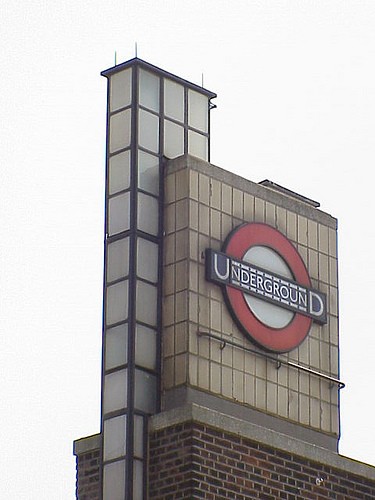 Today, major architectural consideration is rarely given to a subway station. Often, like in Washington, D,C., the Metro stations are cookie cutter replica's of each other. Standards become routine designs not a kit of parts to create with. New York's MTA stations are generally signs directing passengers downstairs to an opening. Other systems like the Massachusetts Bay Transit Authority (MBTA) have recently opted to a design/build packaging of new stations that are driven by contractors rather than architects. Design of the Green Line extension outside of Boston may not be very distinguished or even visually memorable.

The process of subway design and construction is usually laborious and terribly bureaucratic as well. Scheduled to finally open in 2013, a major contemporary exception is the long planned and stretched out processed design which has been modified for the World Trade Center Transportation Center in New York City. It is a project by sculpturally-gifted Spanish architect/engineer Santiago Calatrava. This will be a major exception to the current bland utilitarian design models.

However, things were not always like this in subway station architecture. During the 1920s and 1930s, subway station architecture was a major modernizing architectural force in London. The stations symbolized modern Britain. The Managing Director of the London Underground and later London Passenger Transport Board, Frank Pick, had a vision for the stations. He made them visually prominent and practical. Pick's notion of "fitness for purpose" was a version of form follows function.

Pick wanted new structures to reflect the efficient technological modernity of this growing transport system. Starting in 1924, Pick hired architect Charles Holden (they had first met in 1916) to design station buildings in a modern style. Pick and Holden came from similar backgrounds and had compatible ideas on design. Over the next quarter of a century, they collaborated on numerous stations throughout the Underground network. They also created a new headquarters for the Underground at 55 Broadway in the St. James area of London (1927-29).

Beginning last October and running until this past February, the Victoria & Albert Museum celebrated the career of architect Charles Holden with Underground Journeys: Charles Holden's Designs for London Transport. It was tucked away in a small side gallery on the fourth floor of the massive museum with awkward access to it (no close elevator). The compact exhibit was wonderfully illustrated as well as architectually and historically enlightening.

The problem with most architectual exhibits is scale. Sizes, big, small and everything in between, is modeled or in photographs or drawings. Three dimensionality is also hard to realize in the museum setting. A sense of scale and perspective are therefore often difficult to convey except in a visual shorthand. But somehow Underground Journeys: Charles Holden's Designs for London Transport transcended these problems.Though compact, this exhibit was thorough and thoughtfully comprehensive

In order to standardize the London Underground, Charles Holden initially developed a standard folding screen entrance design for the station buildings. It could be adapted to each of the sites whether it be free-standing or inserted into an existing building. His station exterior design developed brick boxes with concrete lids. The first of these was Sudbury Town station. These elements established a kit of parts for future stations. Traditional English brickwork was combined with smooth concrete, metal window frames and glazed tiling.

Holden was given responsibility for the design of all fixtures and decoration both above and below ground. These were complete and wholistic designs that included lighting, tiling, clocks, litter bins, ticket machines and booths. He also incorporated the Underground’s distinctive roundel, lettering and signage developed by Edward Johnston. The V&A display featured numerous original drawings and renderings of the proposed station designs. Included were various posters and advertisements issued to showcase the new station designs. There were  scale models of the station buildings that further illustrated this master's subway station work.

The hand drawn architectural drawings by Charles Holden were wonderful concept pieces that have a very human touch. Alas, today’s computerized age produces little hand drawn renderings. There is a precision and a simple beauty to these sketches. Computer aided design (CAD) drawings lack the soul and wit of these seventy and eighty year old sketches and water colors. This was a notable aspect of a terrific exhibition.

Charles Henry Holden (1875–1960) was an English architect best known for designing a large number of London Underground stations (over 40) during the 1920s and 30s. Additionallly, he designed for Bristol Central Library, the Underground Electric Railways Company of London's headquarters, and for the University of London's Senate House. Like other complete designers, Holden produced comprehensive designs for his buildings including the interior design and architectural fittings.

Holden was born in Bolton, a suburb of Manchester. Trained as both an architect and engineer, he was a partner in the architectural firm of Holden and Pearson Partnership, one of the most successful firms in Britain. Over the course of his long career, Holden designed buildings throughout the United Kingdom and abroad. His range of work was quite wide with his most distinctive achievements, the modern Underground stations.

Concerned with functional problem-solving like how rainwater could naturally clean a facade, how pedestrians flowedthrough a building, etc. His modernist approach through off cornices, mouldings and pilasters as details of deceit. He had a profound knowledge of construction methods and materials. His work was about being accessible.

Holden's early buildings were influenced by the Arts & Crafts Movement. However, for most of his career, he championed an unadorned style. This was based on simplified forms and massing that were free of what he considered to be unnecessary decorative detailing. After WWI, he simplified his style further. Holden's later designs are pared-down Art Deco minimalist and Modernist that were influenced by contemporary European architecture.

Charles Holden’s London Underground architectural works include all seven stations on the Northern Line extension from Clapham Common south to Morden (opened in 1927). He also designed all eight stations on the Piccadilly Line extension (from Manor House to Cockfosters (completed in 1933).  Possibly Holden's finest achievement for the London Underground was the new Headquarters Building located at 55 Broadway. This major structure was shaped as a huge cruciform building. The building's exterior was adorned with a series of wonderful bas-relief sculptures by Jacob Epstein, Henry Moore and Eric Gill.

Mr. Holden's design style of the London Underground basically changed the face of London in the '20s and '30s. It is the largest building program shaped by a single architect since London's churches were rebuilt by Christopher Wren following the Great Fire of London in 1666.

Architect Charles Holden was a master designer both prolific and well-received by his peers and the public. Holden turned down a knighthood twice stating that architecture was truly a collaboration not an individual effort. This was probably more about his humble roots than about his esteemed career. The Underground Journeys: Charles Holden's Designs for London Transport exhibit at the V&A was a fine glimpse of a talented architect's greatness.