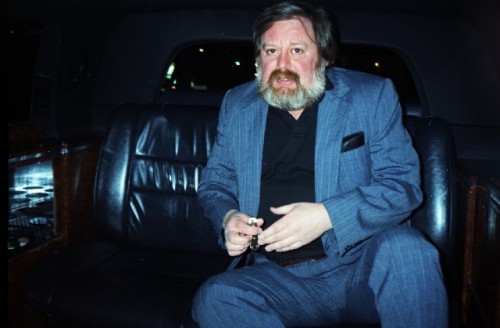 Dennis Metrano in the back seat of a limo enjoying la vida loca. Giuliano photo. 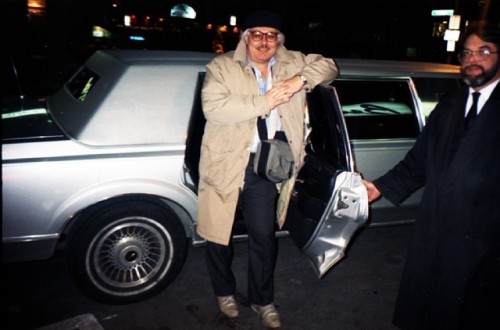 He picked me up in a limo for the WBCN party. 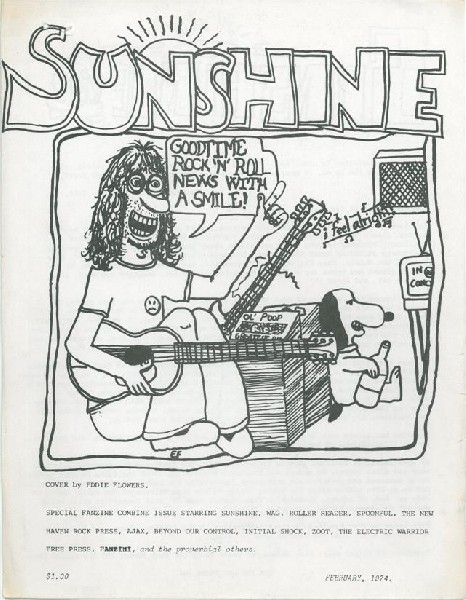 Metrano’s fanzine Sunshine was widely read with a cult following. 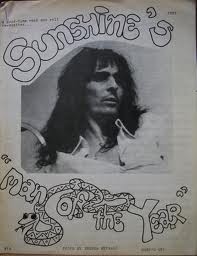 Alice Cooper made the cover of Sunshine.

”I married a lady, in my third go round, that Dennis Metrano introduced me to. At Daisy’s.

(Daisy Buchanan's is a watering hole on Newbury Street. At the time Metrano published a fanzine Sunshine. Later he published The Paper in Newburyport and contributed rock reviews to a number of publications.)

“It’s where the promo guys went just as you described.

“At the time he said to me and Rick Alberti that you guys have to come down on Thursdays. That’s when the stewardesses come in and they’re hot for promo guys. That’s all it took so we went.

“I started talking to this lady Diane. Dennis introduced me to someone I found attractive. It was happening. That little glimmer was there. We were there a couple of hours. She said “You don’t recognize me do you?” I went “No, not really.” She said “I’m Diane who you went out with.”

“I took her out when I was 16-years-old. I just had my driver’s license. With a friend from Quincy we drove to Nantasket Beach. If you were looking for Jewish girls that was a good spot. Particularly in the summer time. I was going to college that fall, Emerson, and this was the end of summer. I took her out once and never went out with her again for a number of reasons. So this is who I’m being introduced to seven years later by Dennis Metrano. A torrid affair started.

“Several years ago we were back in Boston. I went to all my old haunts; Marblehead, Swampscott. We were on the North Shore and I heard that Dennis was in Newburyport. I found him pretty quick. We visited. He had his paper. We stayed at a hotel in the area. You know that gut he had. Like in the photo you published. No more. He’s svelte now and looking good. “Where did the belly go? I got it. (laughs). Dennis was skinny and I was the f word.

“I would have been shocked if I had seen that picture and not run into him earlier. Of all the people in those pictures Dennis was the last one I saw. It was probably half a dozen years ago.”

It was some years ago when I last saw Dennis. With typical panache he dropped by to pick me up in a limo. The occasion was an anniversary and gathering of the Boston rock scene associated with WBCN.

Years ago Dennis relocated to Newburyport where until a couple of years ago he continued his trade as a popular bartender. We spoke by phone awhile back.

I knew him more as a fellow adventurer and rock critic. Initially he wrote for me when I was the rock critic at the Boston Herald Traveler. Then with a reversal of fortune I wrote for several of his tabloids when the HT folded and I bounced around as a freelancer.

Now and then I hung out at his bars and enjoyed his renowned hospitality and mega watt smile. He was always upbeat even through hard times. A man with a striking red beard and wide girth, back in the day, I dubbed him Dennis Blimparoundo. He had a few choice words for me as well in the argot of those times.

The last couple of years have been tough particularly this past brutally harsh winter. Friends are gathering to celebrate him and show their support. It is sure to be a swell time and Dennis will be the life of the party.

On May 18, friends will join Dennis Metrano for “Dennis Appreciation Day” at the Newburyport Elks, 25 Low Street in Newburyport, MA beginning at 12 Noon.

“Dennis has been a supporter and a news reporter of the cultural music, art and restaurant scene in the Newburyport area for over 30 years. He loves the city, its history and people including characters of a bygone era. Now it’s time for us to celebrate his living legacy.” said Phil Gardella, co-chair of the committee organizing the event.

The day will be highlighted with raffles and live entertainment by such local musicians as The Henry Welch Band, The Bahama Bob Band and special guest performers.

Henry Welch, a musical icon in Newburyport says “Dennis came to town as a legendary bar tender at Daisy Buchanans and music writer in Boston. He has great stories to tell about the early days of the WBCN era of music in Boston, the characters, the history. But he has supported the scene here and my band for years.”

According to Robert “aka Bahama Bob” Urzi, leader of The Bahama Bob Band, “I met Dennis years ago when he was editor of the Port Planet, a funky little paper that reviewed the music and culinary scene of the Newburyport area. Dennis is a genius at what he does….I consider Dennis as being one of my true friends. So let’s raise a glass and have a social drink to one of the greatest writers and individuals of our time (on May 18).”

Admission is $10 with proceeds going to Dennis for expenses incurred during his recent downturn in health. For those unable to attend donations can be made directly to Dennis Metrano, 17 Orange Street, Newburyport, MA 01950.