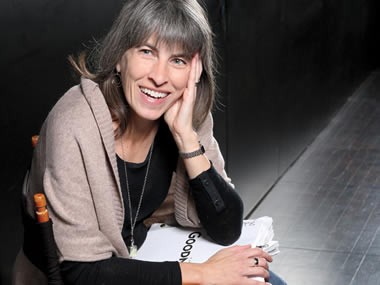 Gilman’s shattering play about the moral dilemma facing a social worker received the top award of $25,000 and a commemorative plaque during the Humana Festival of New American Plays at Actors Theatre of Louisville on April 11.

Two citations that carry $7,500 each were presented to Lucas Hnath’s The Christians and Nathan Alan Davis’ Dontrell, Who Kissed The Sea.

In 1977, ATCA began to honor new plays produced at regional theaters outside New York City, where there are many awards. Since 2000, the award has been generously funded by the Harold and Mimi Steinberg Charitable Trust. At $40,000, Steinberg/ATCA is the largest national new play award program recognizing regional theaters as the crucible for new plays in the United States.

Luna Gale depicts a social worker with a crushing caseload and personal baggage facing a Gordian Knot: leave a child with neglectful drug addict parents or place her with a grandmother who is a religious zealot. This complex and disturbing work about faith and forgiveness is a heart-breaking high-stakes tragedy both relevant and timeless, what one judge called “a pure adrenaline rush.” The play does not provide easy answers for the lifelong after-effects of abuse. And it is clear-sighting about how people struggle to fill the resulting holes in their lives with religion, drugs and public service. Its first production was in January 2014 at the Goodman Theatre in Chicago and subsequently played at the Kirk Douglas Theatre in Los Angeles.

Gilman is the author of the acclaimed plays Spinning Into Butter and Pulitzer-finalist Boy Gets Girl. She is currently an artistic associate at the Goodman, and associate professor of playwriting and screenwriting at Northwestern University.

In Hnath’s The Christians, the audience is thrust into a Sunday morning service in a well-heeled church with an affable, charismatic pastor. But the preacher advocates a profound departure from dogma, causing a huge rift in the congregation. This even-handed, compelling and theatrical work investigates belief on a personal and theological level. It asks deep moral and spiritual questions about doctrine, faith and belief without condescension and with verve and skill. The work debuted last spring at Actors Theatre of Louisville through the Humana Festival, which also premiered Hnath’s Steinberg citation recipient Death Tax.

Davis’ Dontrell, Who Kissed The Sea, is a powerful, metaphoric and poetic drama traces one young man's odyssey in present day Baltimore to palpably connect with his roots by embracing a heroic ancestor who preferred to die drowning in the Atlantic Ocean than arrive in America as a slave. Simultaneously grounded in modern day America, yet gloriously lyrical and theatrical, it mixed the sacred and the mundane.

The work was formally unveiled as part of the National New Play Network Rolling World Premiere Program in a co-production at the Skylight Theatre Company and Lower Depth Theatre Ensemble in Los Angeles after a developmental production at the DC Source Theater Festival.

The Osborn Award funded by ATCA was given to Coash’s play, Veils, a unique look at the differences and similarities between America and the Middle East as viewed in the clashing sensibilities of women’s rights and traditional roles in both civilizations. Two young Muslim women attending the American Egyptian University in Cairo just before the anarchic Arab Spring in 2010 are complex three-dimensional characters, with the American the more traditional of the two while the Egyptian is enamored of western pop culture. But both are searching for sustaining definitions of how they should lead their lives in order to honor both their faith and their integrity in the world. Its premiere was held in February 2014 at Portland Stage in Maine.

Hirschman said this year’s entries validated the future of a vibrant 21st Century theater that mirrors today’s issues as almost never before. “Far from disconnected and elitist, the plays reflected themes and settings encompassing bullying, racism, sexual identity in a repressive society, a street-level view of the aftermath of Hurricane Katrina and genocidal civil war. Some works complete re-invented established 20th Century works like The Crucible, The Seagull and The Heiress for a new century and a new audience. They referenced how technology is creating previously unimagined ethical questions and asked tough questions about how the economic downtown has challenged what people thought were their unshakeable values. Refuting concerns about theater as a relevant and popularly embraced art form, the stunning array and high quality of scripts we read confirmed the enduring commitment of regional theaters and a dazzling diversity of playwrights to be the primary standard-bearers for new works,” he said.

For a full list of 38 years of winners and runners-up, go to www.americantheatrecritics.org and click on Steinberg-ATCA under Awards.

The Harold and Mimi Steinberg Charitable Trust was created in 1986 by Harold Steinberg on behalf of himself and his late wife. Pursuing its primary mission to support the American theater, it has provided grants totaling millions of dollars for new productions of American plays and educational programs for those who may not ordinarily experience live theater.
ATCA was founded in 1974 and works to raise critical standards and public awareness of critics’ functions and responsibilities. The only national association of professional theater critics, with members working for newspapers, magazines, radio and television stations and websites, ATCA is affiliated with the International Association of Theatre Critics, a UNESCO-affiliated organization that sponsors seminars and congresses worldwide.

ATCA also administers the $10,000 Francesca Primus Prize, funded by the Francesca Ronnie Primus Foundation, honoring outstanding contributions to the American theater by female artists who have not yet achieved national prominence. Annually, ATCA makes a recommendation for the Regional Theater Tony Award presented by the American Theatre Wing/Broadway League and votes on inductions into the Theater Hall of Fame.