Randy Weston at Berkshire Museum May 29 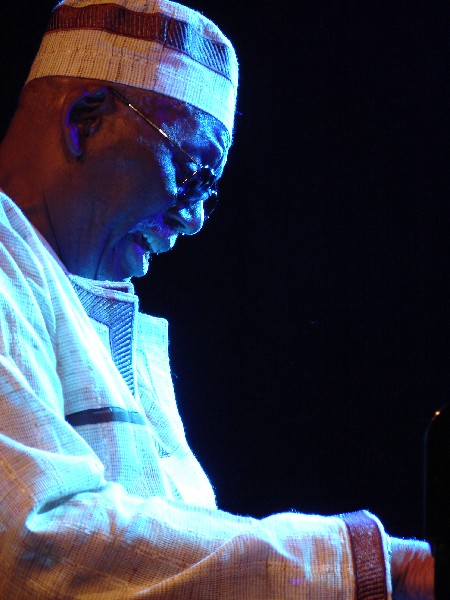 Pianist/composer Randy Weston will appear in a special concert  sponsored by Berkshire Jazz in Pittsfield on Saturday, May 29 at The Berkshire Museum. After nearly a 10-year absence, the NEA Jazz Master returns to the place of his discovery, The Berkshires, for a career retrospective that will include an open panel discussion and a concert featuring his African Rhythms Duo, with Alex Blake on bass.

Weston's story is the stuff of legend. Employed as a young cook in Lenox, Massachusetts, he would often walk over to the renowned jazz resort/retreat called Music Inn, where he would play the piano after hours. Proprietress Stephanie Barber, who hired him as a dishwasher, discovered his pianistic skills and encouraged the young Brooklynite to pursue a career in music. He has a jazz resume that spans some 55 years, Weston has dozens of recordings and compositions to his name.

As a budding professional jazz artist, and later as an accomplished world traveler and performer, Weston frequently stayed in the Berkshires for rest and creative inspiration. Acknowledging The Berkshires' special place in his heart, his most famous composition, one that has become a jazz standard, is called Berkshire Blues. His compositions have been recorded by many renowned pianists, from Ahmad Jamal to George Shearing, and many more.

"Weston has the biggest sound of any jazz pianist since Ellington and Monk, as well as the richest most inventive beat," states jazz critic Stanley Crouch. "But his art is more than projection and time; it's the result of a studious and inspired intelligence...an intelligence that is creating a fresh synthesis of African elements with jazz technique".

Weston's awards and distinctions are many, and were capped in 2001 with his designation as Jazz Master by the National Endowment for the Arts. In 2006, he was awarded an honorary Doctorate of Music from Brooklyn College, and in 2009 he was named to the ASCAP Jazz Wall of Fame. His autobiography will be published this September by Duke University Press.

On the afternoon of the concert, he will "meet the press" in a media panel chaired by the notable jazz writer Willard Jenkins, and including Milton Bass, the Berkshire Eagle writer who wrote the first review of a Randy Weston concert; Seth Rogovoy, editor of the Berkshire Living magazine; and Tom Reney, jazz programmer at western New England's principal jazz station, WFCR-FM. The panel is free, open to the public, and will be recorded for later broadcast.

For program updates, box office, and other information, visit www.BerkshiresJazz.org This concert is presented with the support of the Aaron Copland Fund for Music, The High Meadow Foundation, and the Greylock Federal Credit Union.

.Berkshires Jazz, Inc., announceds the headline performers for the sixth annual Pittsfield CityJazz Festival, as well as a special Memorial Day weekend concert with jazz master Randy Weston. The group also announced two aspects to its growing commitment to education: the winner of its Student Art Contest, and the establishment of a new scholarship for a graduating senior from the Berkshires Jazz Youth Ensemble.

The announcements were made during a special reception at the Berkshire Museum last night. The event included music by the Berkshires Jazz Youth Ensemble, its first performance since last October, when the big band appeared with Dave Brubeck at the 2009 Pittsfield CityJazz Festival.

One aspect of the festival that has drawn significant local attention over the past two years is the Student Art Contest. This year, there were 56 entries from Miss Hall's, St. Joseph's, and Pittsfield and Taconic High Schools. Art Niedeck, chairman of the Education Committee of Berkshires Jazz, announced the winning entries.

The winning entry will become the visual symbol of this year's Pittsfield CityJazz Festival, and will be seen on the festival's poster, web site, advertising, and program cover.

Further to its mission of promoting jazz education, Berkshires Jazz announced the institution of a $250 scholarship to a graduating member of the Berkshires Jazz Youth Ensemble. The big band comprises students from five high schools in the County, and the recipient will be announced before the end of this academic year.

The first musical event of the Berkshires Jazz season will be a special concert with Randy Weston, who will perform with his African Rhythms Duo featuring Alex Blaks on bass, on May 29. On the afternoon of the concert, Weston Â–who will be appearing in the Berkshires for the first time in a decade-- will be interviewed in "meet the press" style, facing a media panel chaired by the noted jazz writer Willard Jenkins. Participants will include Milton Bass, the Berkshire Eagle reporter who wrote the first review ever of a Randy Weston performance; Seth Rogovoy, editor of the award-winning Berkshire Living magazine; and Tom Reney, host of the popular "Jazz a' la Mode" show on WFCR-FM, western Massachusetts' NPR station.

The panel and the concert will both be held at the Berkshire Museum, 39 South Street, Pittsfield. The panel is free and open to the public; tickets for the evening concert are $20 in advance, $25 at the door, and are now on sale at the Berkshire Museum box office, 413-443-7171, ext. 10. The concert is presented with the support of the Aaron Copland Fund for Music, The High Meadow Foundation, and the Greylock Federal Credit Union.

The dates for this year's Pittsfield CityJazz Festival are Oct. 8-21. Headliners include

* Oct. 15: the Berkshires debut of Joe Baione, a Delaware-based vibraphone player and his quintet;

* Oct. 16: a guest appearance of baritone saxophone virtuoso Claire Daly, who will be featured as a soloist with two big bands on the docket: The Berkshires Jazz Youth Ensemble and the American Jazz Repertory Orchestra (AJRO); * AJRO is directed by Clem DeRosa, a member of the Jazz Hall of Fame, a big-band drummer and pioneer in jazz education. During his military career, DeRosa served with one of Glenn Miller's Air Corps Bands, and later fronted one of Miller's "ghost bands," and the Benny Goodman band, on tours.

AJRO is back by popular demand, after its 2009 appearance at First United Methodist Church. Besides featuring Daly, AJRO will perform jointly with the Berkshires Jazz Youth Ensemble, directed by Ron Lively, in an all-hands-on-stage finale.

Once again, the festival will be collaborating with the schools of Berkshire County with free performances and discussions. Additionally, regional musicians will be appearing in restaurants and lounges on Columbus Day weekend, Oct. 8-10.

For ticketing and other information, visit www.BerkshiresJazz.org.

About Berkshires Jazz
Berkshires Jazz, Inc., a 501c3 non-profit organization, was formed in 2009 to present jazz events and promote jazz education in Berkshire County. The organization is the sponsor of the Pittsfield CityJazz Festival. Information at www.BerkshiresJazz.org.