A Poignant Story of the American Dream Unmet 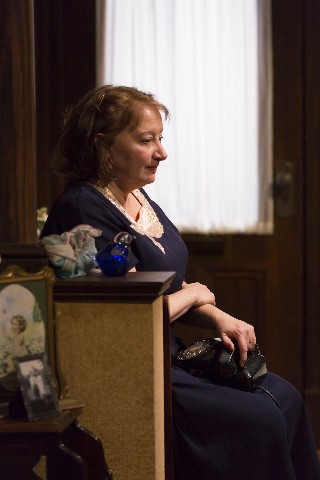 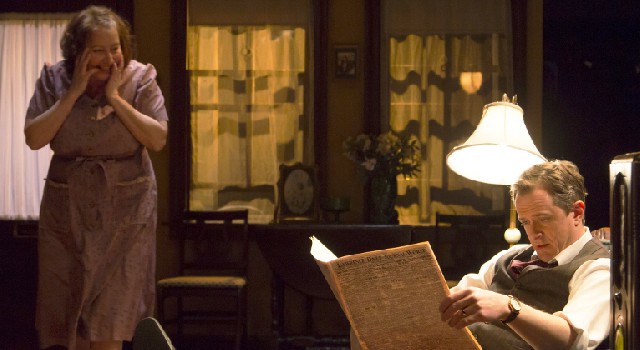 Adrianne Krstansky as Lola and Derek Hasenstab as Doc 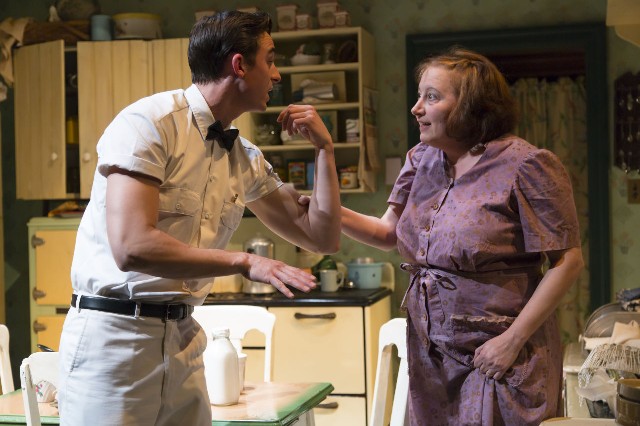 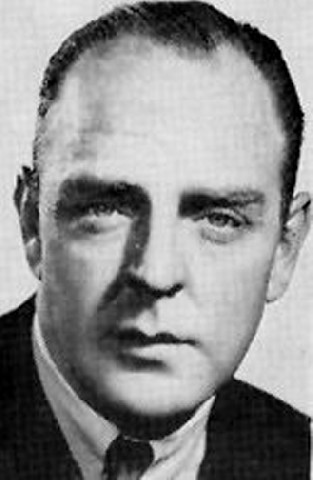 Come Back, Little Sheba
By William Inge
Directed by David Cromer
With Derek Hasenstab as Doc, Adrianne Krstansky as Lola, Marie Polizzano as Marie, Max Carpenter as Turk, Nael Nacer as Bruce,  Michael Knowlton as the Milkman, Adam Zahler as the Postman, Maureen Keiller as Mrs. Coffman, Christopher Tarjan as Ed Anderson, and Jeremy Browne as Elmo. Creative: Scenic design by Stephen Dobay, Costume design by Sarah Laux, Lighting design by Mike Durst and Sound design by Jonathan Mastro.
In Boston's South End at the Calderwood Pavilion at the BCA, 527 Tremont Street, Boston
March 27 – April 26, 2015 (Extended through May 2)
huntingtontheatre.org
In two acts with a 10 minute intermission

Set in an old house located in a rundown neighborhood in a Midwestern city, William Inge's now classic story of depressed and depressing American unfulfilled life is less transformative than just informative. Using the runaway beloved dog, Little Sheba, as the metaphor for lost and never to return youth and hope, the playwright crafts a view of a passionless early middle age couple seemingly trapped by their environment, history and ultimately themselves.

With brilliant performances by gifted actors, this unhappy story is told deliberately and at times eloquently. Here a slice of life seems to cut both wife Lola and husband Doc in different but painful ways.

Doc, skillfully played with a quiet to loud range by Derek Hasenstab, is longingly regretful for not fulfilling his dream of becoming a medical doctor. His acting is sensational. Lola, brilliantly played by Adrianne Krstansky (actually, not enough can be said about her wonderful performance), is constantly reminded and highly self-aware of her lost youth and fading, even deteriorating, beauty.

Through Come Back, Little Sheba, Inge examines the challenges and coping mechanisms of growing older in America's post-War increasingly youth-obsessed culture. None of his characters are paragons; all have flaws. But like the interior of the house, at various times, each can be cleaned up extremely well. The narrative makes us understand that looks can deceive.

Filling the whole stage at the Roberts' Studio venue, the flexible set makes us understand inside and outside as well as various rooms in the house. The scenic design by Stephen Dobay evokes a late 40s/early 50s ambience. This is underscored by the living room radio that needs its tubes to warm up before we can hear programs. This audio delay enriches our period experience. The sound design by Jonathan Mastro is terrific. Costume designer Sarah Laux's period correct outfits for Lola, Mrs. Coffman and Marie as well as the men's clothing are all post WWII evocative.

Reflective of the same late 1940s period of the best works of Tennessee Williams and Arthur Miller, Inge's Come Back, Little Sheba speaks to the emptiness and failure of lives not lived well. Here the American Dream is not obtained, and the very personal pain even paralysis of self-awareness rather than self-deception is pushed away.

Thoughtfully directed by David Cromer, there is a rawness that underscores the narrative. Not much happens other than social activity and routine. Skillfully Cromer allows the play's mundane details (washing dishes, cleaning, etc.) to silently  move the story along. Through superficial gestures and banal words expressed, the realism of the play is often poignant and heart wrenchingly sad.

This is not a happy story, nor is it an expression of universal expectations and outcomes. Instead this is a play about very ordinary people living day by day and eventually settling for less than was desired, a resigned accommodation with what life has wrought.

With wonderful acting, astute direction and beautiful stagecraft, Come Back, Little Sheba is serious drama presented by the Huntington Theatre Company in a brilliant way. This production leaves us questioning what life is all about and why some men and women do what they do simply to exist.