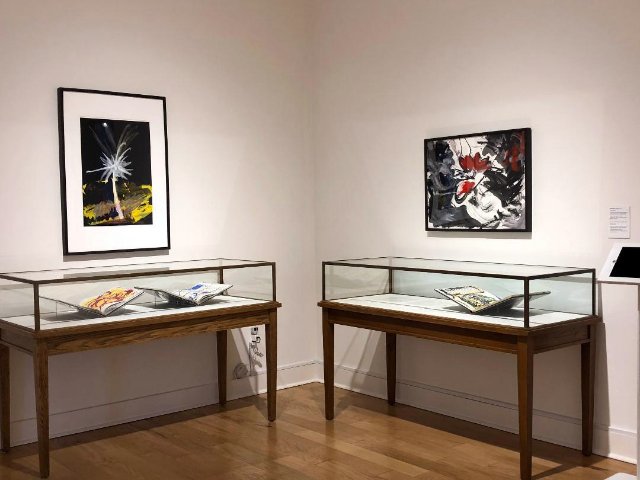 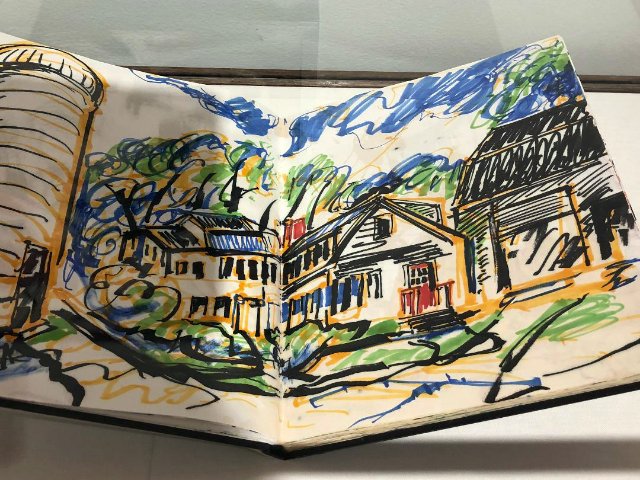 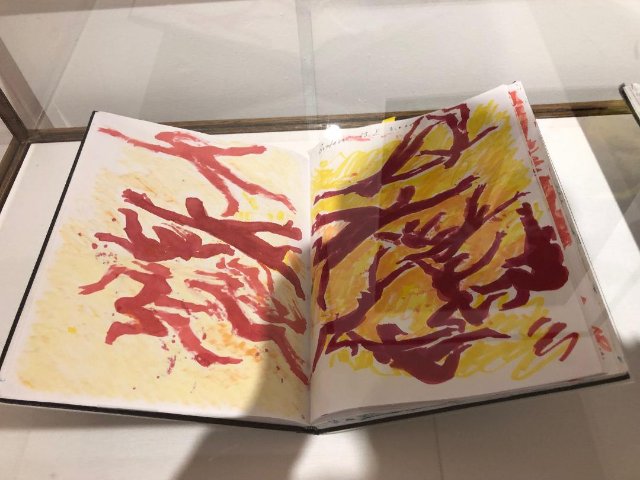 Three of Otto Piene's sketchbooks are currently on view, until June 2nd, at the Fitchburg Art Museum in Massachusetts (FAM). The extensive exhibition of Piene's work, which is titled Fire and Light: Otto Piene in Groton, 1983-2014,  includes an inflatable sculpture, Red Star, and two separate installations. One with Light Robots, projecting and moving  black and white shadows along the walls. The other one is titled: Proliferation of the Sun, which  engulfs the visitor totally in colorful, mostly circular and changing images while standing in the space. Of course, Piene's fire paintings are on view as well as a video section and a timeline of his life and multi-faceted oeuvre.

Please read an article about the FAM exhibition, which was just published yesterday on Berkshire Fine Arts. It includes more than 70 photographs documenting the exhibition and Piene's  art work. Here's a direct link to the show. What follows is a press release for the major donation.

The Harvard Art Museums are pleased to announce an extraordinary gift of 70 sketchbooks by internationally renowned artist Otto Piene (1928–2014); the gift was made by poet and author Elizabeth Goldring, the artist’s wife. Dating from 1935 to 2014, the largely unpublished sketchbooks reflect interdisciplinary, cross-media experiments from Piene’s long career in the Boston area and abroad, including both realized and unrealized projects. In keeping with the museums’ history and ongoing commitment to training and research, the next Stefan Engelhorn Curatorial Fellow in the Busch-Reisinger Museum (2019–21) will soon be appointed to study and catalog this new gift.

The gift also includes a selection of pens, the primary medium Piene used for his sketches, including the Magic Marker brand; these will be held in the Center for the Technical Study of Modern Art (CTSMA) and will play a key role in the long-term preservation of Piene’s sketchbooks. Part of the museums’ Straus Center for Conservation and Technical Studies, CTSMA is dedicated to the study of materials and issues associated with making and conserving modern works of art.

“Elizabeth Goldring’s generosity will greatly benefit students and scholars from around the world,” said Martha Tedeschi, the Elizabeth and John Moors Cabot Director of the Harvard Art Museums. “This significant gift not only opens new research avenues but also broadens the offerings available in our Art Study Center, where both general visitors and scholars can make an appointment to view works of art like these exceptional sketchbooks. Providing this type of access to our collections is an integral component of our teaching and research mission.”

“The sketchbooks have found an ideal home in the Busch-Reisinger Museum,” said Lynette Roth, the Daimler Curator of the Busch-Reisinger Museum and Head of the Division of Modern and Contemporary Art. The sketchbooks complement the Busch-Reisinger’s existing holdings of works by Piene, which include a small early painting and two major fire gouaches. An early sketchbook was featured in the museums’ 2018 special exhibition Inventur—Art in Germany, 1943–55. “Throughout Piene’s career, sketching was a generative site for visionary large-scale projects and for material experimentation,” said Roth.

Piene’s sketchbook practice began when he was just a child and continued after he was conscripted as a Kindersoldat (child soldier) in the final throes of World War II. According to the artist: “Even during the last weeks of the war, I constantly had a sketchbook and box of watercolors with me. [By war’s end,] I had finally lost all my belongings. I did not even have a toothbrush, but I always had my sketchpad and a box of watercolors.” Some of his sketches from this time feature the auxiliary fighter base where Piene was stationed, including depictions of fellow soldiers and anti-aircraft weaponry as well as the surrounding landscape and views of the sky. Early sketchbooks reveal the artist’s childhood interest in technology—equal parts fear and fascination—which would influence his adult career in multiple ways. As a response to his experience of war and widespread destruction, Piene was consistently drawn to the idea of “building something better rather than just tearing things down.”

In 1964, following the success of Group ZERO, which he co-founded in Düsseldorf in 1957, Piene was invited to the United States. From 1968 to 1971, he was the first fellow appointed from outside Boston at the MIT Center for Advanced Visual Studies, which he then directed between 1974 and 1994. At MIT, Piene found the means to integrate art and technology on a large, international scale. The sketchbooks document his wide array of projects, from the 1975 Food Show, to the monumental kinetic installation Centerbeam, to his “Sky Art” events, which required extensive collaboration among scientists, engineers, and volunteers.

The sketchbooks strengthen the museums’ holdings of works by postwar artists—many, like the Group ZERO artists Heinz Mack and Günther Uecker, in an ongoing exchange with Piene. In addition, the Harvard Art Museums Archives holds the papers of the Howard Wise Gallery, the first gallery to exhibit Group ZERO in the United States. The museums also have strengths in international Fluxus art, including the Busch-Reisinger Museum’s near-complete collection of multiples by Joseph Beuys. The Fogg Museum’s Barbara and Peter Moore Fluxus Collection was also recently enhanced by an adjacent major gift from the nephew of artist Nam June Paik, a close collaborator of Piene. Made by Ken Hakuta, that gift included both works of art and the endowment of a new fellowship to support research on Paik.

While he traveled extensively and retained a studio in Düsseldorf (now home to the ZERO Foundation), Piene made most of his sketchbooks in Massachusetts. In the mid-1980s, he and Goldring converted a Groton farm into their home and studio—what they came to refer to as the “art farm.” Their 2014 book The Light Silo remains the most comprehensive publication of Piene’s sketches, focusing on the property’s natural surrounds and on a light installation in a preexisting grain silo.

“Otto’s sketchbook practice informed our lives together,” said Goldring. “He carried sketchbooks everywhere—on vacations, and to and from MIT. Every time he had a few minutes, he would sketch. The sketchbooks are the essence of what we did and what we were thinking. On the one hand, they are very personal; on the other, they aren’t personal—at least not in an anecdotal way—but rather universal.” The museums’ teaching and research mission offers, according to Goldring, “the potential for people to go in depth with these works. The sketchbooks are laden with so many different ideas and possibilities for realizing dreams.”

Sketchbooks are a historical strength and interest of the Harvard Art Museums, which currently house 156 sketchbooks. The largest collection was received in the mid- to late 1930s, a gift of artist John Singer Sargent’s sketchbooks from his sisters, along with other works by Sargent such as oil sketches for larger works and unbound drawings. Other significant holdings include works by 20th-century artists such as Sanford Gifford Robinson, Lyonel Feininger, Mel Pekarsky, Elena Prentice, and Christopher Wilmarth. The museums’ expansive Art Study Center offers visitors, students, and faculty the ideal environment to engage with bound and sequenced drawings such as these.

The Harvard Art Museums are currently featuring two major light works by Otto Piene in a gallery on Level 1 (Room 1100) dedicated to the experimental practice of the 1960s. At the Fitchburg Art Museum in central Massachusetts, the special exhibition Fire and Light: Otto Piene in Groton, 1983–2014 (through June 2, 2019) includes three of the artist’s late sketchbooks from the recent gift to Harvard.