Reinventing I Remember Mama Off Broadway 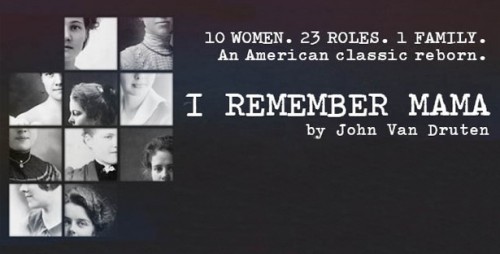 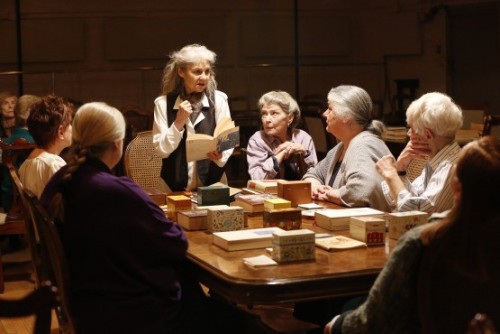 An all female cast. 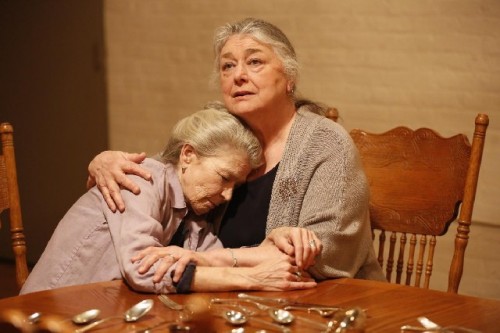 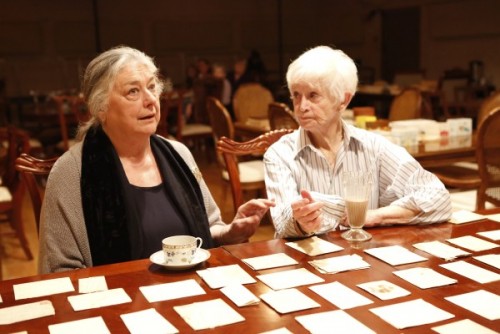 The words of the playwright, frequently lost among flashy costumes, stage lighting, moving mechanical sets, actorly histrionics, and overly reactive audiences, has always been the most important thing about theatre to me. Good or bad, I want to both hear and feel everything that the playwright has to say. I want to be made to laugh and cry, and turned every which way but loose. I want to be touched by the blessed sacredness of time, be it past, future, or now. I want to leave the theatre remembering what life is all about and loving it all the more.

The Transport Group Theatre’s production of I Remember Mama, the season’s truly “must see” and “run don’t walk” – it will be treading the boards at the Gym at Judson through April 20, and hopefully extended – granted all of my above wishes. And judging from welling tears, breaths held, and the audible hosannas heard as they exited the theatre, the audience most definitely followed suit. Love, the transitory nature of life, and our own mortality, all touched upon by the play’s theme, similar to that of Thornton Wilder’s Our Town, gets us all the time.

Breathing new life into “Mama” – not seen in dramatic form for some 70 years – the ever inventive Jack Cummings III, the group's artistic director, cast 10 amazingly talented vintage actresses, all in their 70s and 80s, each with mile long resumes, to play all 23 roles, all ages and both genders. He also did away with a traditional set, and typical audience seating. Here we are greeted, upon entering the cavernous space, with an city-like avenue of 10, chair surrounded, large dining room tables, each laden with old and weathered cups and saucers, books, letters, typewriters, and photographs, all indicating the passage of time, as well as human activity we are to experience during the course of the play. As for the audience, we all sat lining the gym’s four walls, as the life of the family took place, at and around, each table.

Based on Kathryn Forbes' collection of fictionalized short stories entitled Mama’s Bank Account (1943), I Remember Mama recalls the trials and tribulations of daily life, as seen through the eyes of Katrin, the oldest daughter, an aspiring writer, and the play’s narrator. It is the story of a loving Norwegian immigrant family and assorted characters, held together by a wise and caring mother, at the turn-of-the-century in San Francisco.

Adapted for the Broadway stage by John Van Druten (1901-1957), “Mama” starred the Austrian actress Mady Christians, Oscar Homolka, Joan Tetzel, and Marlon Brando, making his Broadway Debut as Nels. It opened at the Music Box Theatre in 1944 where it ran for 744 performances. In 1948, with Irene Dunne playing Mama and Barbara Bel Geddes Katrin, it jumped to the big screen where it garnered Dunne an Oscar nomination. From screen it moved successfully to CBS where Peggy Wood, playing Mama was nominated for an Emmy, held the attention of TV audiences weekly from 1949-1957.

Act one opens with a sprightly Katrin (beautifully enacted by Barbara Barrie, now in her 80s), reading the last lines of her autobiographical novel. As she reminisces about her family life we flashback to 1910 where we are introduced to the immediate members of the Hanson family. “For as long as I could remember, the house on Steiner Street had been home. Papa and Mama had both been born in Norway, but they came to San Francisco because Mama's sisters were here. All of us were born here, Nels, the oldest and the only boy – my sister Christine – and the littlest sister, Dagmar. It's funny, but when I look back, I always see Nels and Christine and myself looking almost as we do today. I guess that's because the people you see all the time stay the same age in your head.”

The Mama of this play is Barbara Andres who is simply an amazing actress. What nuance. With great warmth, intelligence, and believability oozing from every pore, Andres is the perfect Mama. Later on we get to meet – also brought into the play, one by one, by Barrie – a doctor (Dale Soules), a nurse (Susan Lehman), a famous woman writer (Louise Sorel), three aunts (Alice Cannon, Rita Gardner, Susan Lehman), an undertaker (Heather MacRae), and the formidable Uncle Chris and Mr. Hyde, the latter two brilliantly channeled by Lynn Cohen with an astute and uncanny knowingness. For the next two hours and twenty minutes, with one intermission, we get to be our young selves again as we watch the family, over a period of a few years, go about their daily life.

In many ways, which is why I Remember Mama was such a hit in all of its permutations, and still manages to capture our attention today, the story being told belongs to all of us. One way or another, each situation portrayed, both real and metaphorically speaking, is the story of our lives. When you think about it, there is no character or situation out of the ordinary. Who hasn’t faced meddling family members who rarely have a kind word about anything or anybody, a maiden aunt that finally gets married, a daughter taken to the hospital, a son who needs an operation, a child about to graduate high school, a hard drinking uncle living with a questionable woman, or a wailing house cat calling for attention, the latter’s wail effectively played by Lynn Cohen.

To make such magic out of the ordinary is no small feat. In fact, it could be considered one the miracles of theatre, as well as life.