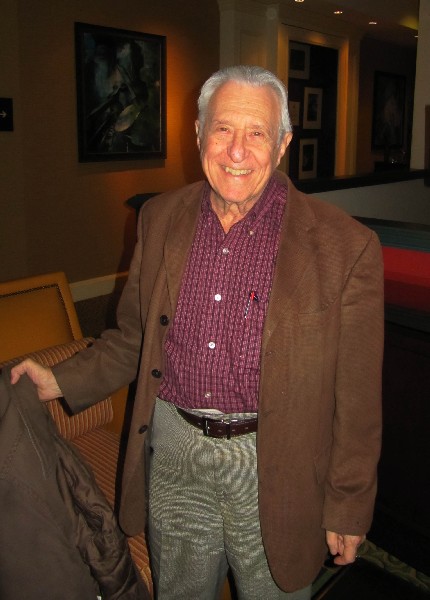 Fred Taylor has been booking Scullers for the past 21 years. 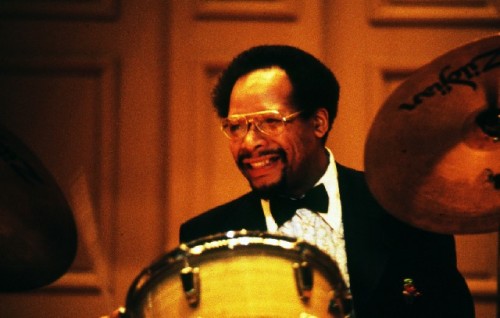 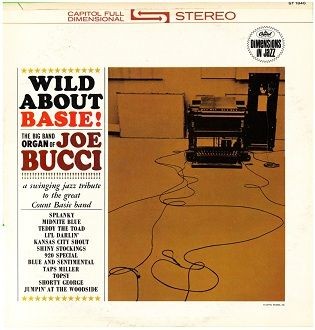 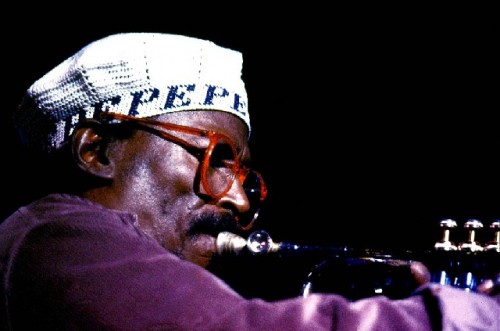 Taylor bonded with Miles Davis who performed at the Jazz Workshop. Giuliano photo. 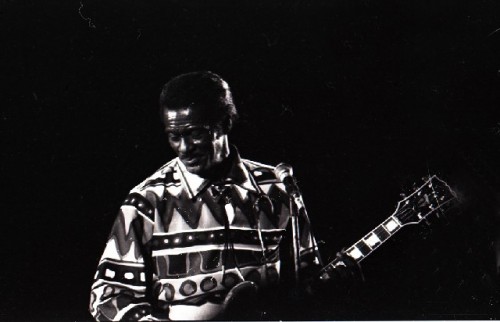 Working with Chuck Berry was a pain in the butt. Giuliano photo. 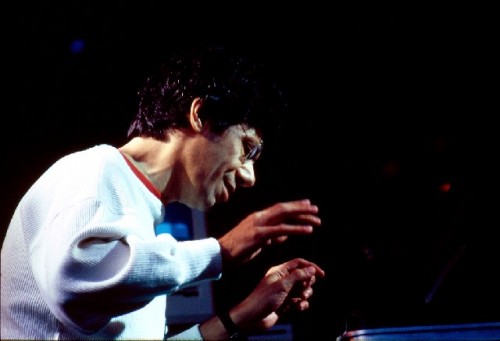 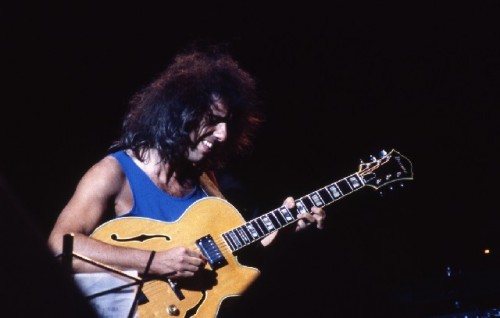 Pat Metheny was among the many former Berklee students who performed at the Jazz Workshop. Giuliano photo.

After nine years of working for the Serta Mattress Company a career in show biz started somewhat by accident. In 1952 Fred Taylor made a reel to reel tape of Dave Brubeck and Paul Desmond at Storyville. The amateur tape ended up as an LP for Fantasy Records which was named by the NY Times as "Best New jazz Album of The Year." After that as Taylor says "One thing led to another." For the past 21 years he has been booking jazz for the renowned Boston club Scullers.


Charles Giuliano Do you run Scullers?

Freddy Taylor Yeah, for 21 years. I actually came in close to a year after it had opened. They were bumbeling around. Sue Auclaire told the GM you ought to call Fred Taylor. Perhaps he can help. At first I thought well I can help them a little bit and one day the General Manager, Mark Phelan, said “Will you just take this over and run it.” I said oh geeze I hadn’t planned getting back into this. Then I said, ok.

CG Let’s talk about the Jazz Workshop and Paul’s Mall. When did you get involved with those clubs?

FT That was 1963 through 1978. I owned and ran them. I had a partner. Tony Mauriello. He used to run the Starlight Lounge in Allston. I’ll tell you how I got into this business. The whole thing is osmosis.

The tape recording started in ’53 (’52). I was running around town taping stuff. One day I got a call from John Sdoucos who was working with George (Wein) at Storyville in Copley Square. He said “Listen, I found this jazz organist, would you come by. He’s at Jackie’s Game Bar in Lynn, Mass. Would you come out and record him.” So I said, ok. I went out and recorded him for four or five nights. It was just organ and drums. But this guy is playing like the Basie band. Fabulous.

At the end of the week I said “John you owe me a little money.” John was shuffling his feet and said “I’m well ummmm a little tight right now.” I said, tell you what, I’ll make you a deal. You don’t owe me anything. This guy’s great, let’s go in partners, and see if we can promote him. That’s how I started.

I had been working for Serta Mattress Company for nine years. I had just quit. I had one of the great slogans, they didn’t use it “Serta Mattress Playground of America.” (Laughs) I was supposed to be looking for a job but I got involved in promoting Joe Bucci. We kept working on it.

Then I met Al Coury who was a promotion man for Capital Records. I gave him the tapes and we signed with Capital and made a great LP Wild About Basie. That’s how I started in this business. It was an accident. But from this point on it flows, one thing leads to another, and another.

We needed a place to rehearse for the recording. John said, “I know a little truck stop bar/ lounge up on Route One in Peabody.”

CG Are you talking about Lennie’s on the Turnpike?

FT It was Lennie’s (Lennie Sogoloff) but before it was Lennie’s on the Turnpike. We said if we can rehearse during the day we’ll play at night. We did so much business that week because there was a fan base and people loved Joe on the North Shore. Then we were supposed to leave and go to New York. I said to Lenny, “You should keep this going with live music.”

Then we got delayed for a week so I’m running around Copley Square and I see this little deli restaurant called Lindy’s on Dartmouth Street. Right near the corner of Huntington. No Stuart. I see that there is a stage in the back. So I go in and say “Is the owner here?” I give him this whole story about recording for Capital with Joe Bucci and we need a place to work for the week. He said “What do you want?” I said “Give us three hundred and fifty bucks and that will take care of us for the week.”

So he said “Hmm. I’ll tell you what. I’ll go fifty fifty on the register. The first hundred bucks comes out for the bar tender.” I said “You do a little advertising, can I place an ad?”

We ended up making $480 and he was thrilled. He said you have to come back. That man was Harold Buchalter. He owned the Stables and the Show Bar up on Huntington Avenue.

He said “I’m going to have to leave these places.” (Demolished to construct the Mass Pike) “But I have some new places on Boylston Street and I want you to run the new Jazz Workshop.” That’s how I got involved with the Jazz Workshop because Harold loved everything I was doing. I started booking and promoting the Jazz Workshop. Varty Haratoonian was running the music.

CG Who was the big guy who used to be the doorman?

FT No. Named for Paul Zalen a very popular piano player in Boston. Harold brought him in to manage Paul’s Mall and I was doing the booking and promotion. A couple of months after we had opened Paul disappeared. So Harold came and said “Listen would you like to take over the club.” I said “Whoa. Yeah, but I can’t do it alone.” I went to see Tony Mauriello who was running the Starlight Lounge. I had come to know him because I was booking Joe Bucci at the Starlight Lounge. Joe was really the reason why I got into this whole business. I stared working with him and just forgot to look for a job.

CG Let’s talk about some of the great artists at the Jazz Workshop.

FT We opened with Stan Getz. In 1967 I first booked Miles (Davis). I was a little apprehensive. He already had a reputation, you know, Miles. There was a thing they called the Miles Davis Doll. You wind it up and it turns its back on you.

Miles came in. It was a Monday. We were running seven days a week. I came in at 9 and he was sitting at the bar. I said “Hello Miles, I’m Fred Taylor.” He was just staring straight ahead and I could have just been talking to the air. So I said “How do you like to run your sets?”

Then he turned around and said (in the gruff, hoarse voice of Miles) “I came here to play man.”

So I said “We start at nine and close at two. You’re in charge.”

Then I walked away. Best thing I could have said. He had that band on the stand at nine and played his ass off that night. He came to me at the end of the night and said “What did you think of the band?”

He said “You’re right.” That meeting bonded us. Miles was a no bullshit guy. You’ve got to cut to the chase. I didn’t give him any fluff. I just said “You’re here. You play.”

CG Who was he playing with at that time?

FT Yeah, in Paul’s Mall. That was great.

CG I remember dancing to Chuck Berry in the Mall when there were about 20 people.

FT (groan) Chuck Berry. I tell you. I would never work with him again. We booked Chuck Berry through the William Morris agency, contract and everything. A week before the gig I get a call from Chuck Berry “You know, that’s not enough money.” I said “This is the contract, we agreed.” He said “Well, I need more. I’m not coming in unless there’s another three thousand dollars.” It was so close to the date so I said all right. Then he comes in and says “I don’t go on until I get all the money in cash.” So I’m running around borrowing money. Because you don’t have money, cash, until the end of the night.

CG You did Bo Diddley at the Mall. I saw him there.

CG Who were the artists of that time that you most fondly remember?

FT In those days you worked with an artist for six or seven days in a week. You got to know them as people. Not just as the guy up on the stand making music. You bonded more with the artist. There are a lot of musicians who come here to Scullers who started at Paul’s Mall and the Workshop. There were long term relationships.

CG I remember the Miles gigs. If he was in for the week you were lucky if he showed up on Wednesday.

FT No, no. Only once he missed a Monday on me. Only once. He was good with me.

CG Who do you remember fondly?

FT I was just in the office and picked up an album by Kenny Rankin.  What a voice and he wrote great tunes. I started with Kenny back in ’71 or ’72 and then he played here. He just died a couple of years ago (2009). I’m very close with Ahmad Jamal. Ahmad introduced me to his protégé Hiromi. Jimmy McGriff, we were very close. Today there are the musicians out there like Harvey Mason a great drummer.

In the beginning of the Jazz Workshop we would bring in a single artist like Sonny Stitt and put our own rhythm section together. So I would call Muzzy, Ray Santisi (piano), and say “Listen, I need you and Alan Dawson (drummer) but pick what you think is a really talented young bass player. Let’s give them a chance to put their feet to the road.”

So I used to bring in one student. Harvey Mason will be here tomorrow. He said “You know I went to Berklee but I really learned my music at the Jazz Workshop.”

CG What impact has Berklee had on the equation?

FT It has brought in so many talented players. Keith Jarrett was my house pianist. He was going to Berklee. I brought him into the Mall with a trio and he was backing up singers. Miroslav Vitous (bass), who Cannonball brought from Czechoslovakia, I put him in rhythm sections. Berklee has been a spawning ground of musicians.

CG Did Chick (Corea) play in the club?

FT Oh yes, His uncle was the piano tuner. He came from Chelsea. We introduced so many great acts like Earth Wind and Fire (at Tanglewood this summer). The Pointer Sisters, Bette Midler, Bruce Springsteen, Aerosmith.

In the Workshop George Benson was the guitar player with Jack McDuff. Then he formed his group and we brought him in six times a year. He finally broke out. Joe Zawinul left Cannonball and formed Weather Report. Pat Metheny left Gary Burton to form his group.

There’s a musical family tree which just goes on. In fact I’m going to leave here in about 20 minutes because Grace Kelly (alto sax) is playing live tonight at WGBH on Eric’s show. I’ve been mentoring Grace for about the past four years.

CG Didn’t you have her in the tent at the Tanglewood Jazz Festival?

FT Right. She writes, she plays, she arranges. Her album which just came out is with Phil Woods.

CG Thanks so much for your time. This has been great.