Age of Innocence at Hartford Stage 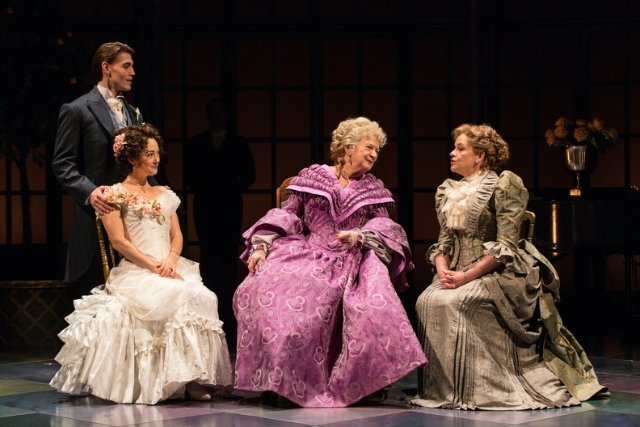 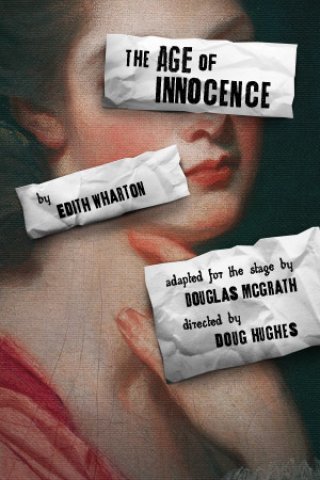 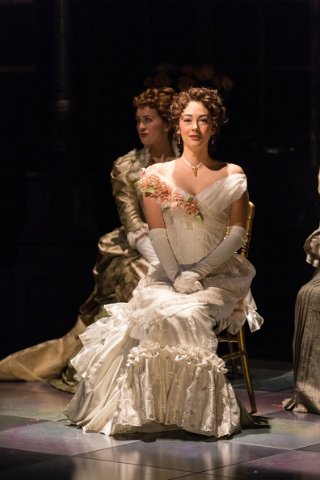 Age of Innocence at Hartford Stage through May 6 is a stunning production. Yet, just like the characters, it is at times so controlled that real emotion is difficult to find.

Douglas McGrath has taken Edith Wharton’s novel of constricted high society in New York City in the 1870s and condensed it to 100 minutes. By focusing on specific scenes with little connection between them, at times it feels episodic and lacks flow. It also seems more difficult for the actors to develop their characters fully. It is like you are “dropping in” for a few minutes before leaving.

In some ways he and director Doug Hughes have tried to solve the problem with “the Old Gentleman” who serves as a narrator.  He is actually the older version of the hero of the play.

Newland Archer is a young lawyer from a family well connected and a member of  New York “high society”, what was sometimes known as “the 400.” He is engaged to be married to May Welland, the very conventional daughter of another wealthy society family. But before the marriage can take place – May insists on a year’s engagement – he meets her unconventional cousin, Countess Ellen Olenska who has returned to the City after leaving her husband and perhaps having a dalliance. All of society is horrified by her rejection of their rules and expectations, trying to ostracize her until one of the most prominent families declares that they can’t turn their backs on “one of their own.” Newland finds her both exciting and interesting as he meets her and later is assigned some legal work for her. Yet he goes through with the marriage to May which turns out to be as routine, predictable and dull as he had realized during the engagement. New things, new experiences, doing something different are all anathema to May.

With the Countess still in New York, the two are thrown together often both socially and because of the legal complications of her life. The relationship develops and both acknowledge their mutual attraction. He has even decided to run away with the Countess, who is returning to Europe (but not her husband) before May thwarts it.

The picture of society that Wharton and McGrath paint is damming. These are people who live by a strict set of rules that they have created about how one should behave, what is moral or not, and what is proper. They do not hesitate to ostracize any who violate them in even the slightest way, while viewing themselves as superior to all others, as shown by their causal prejudice and bigotry. They are snobs of the worst type.

That’s what makes most the characters so problematic; they lack any empathy or compassion, are smug in their certainty of their beliefs and feel they are the true leaders of not only society but also the country, or they should be.

So much of this production is excellent. The setting by John Lee Beatty is outstanding. It looks like a glass enclosed conservatory from the Victorian era replete with crystal chandeliers. It recalls a greenhouse or hot house where rare blooms are cultivated protected from any outside elements. A perfect metaphor for the society.

Add to that exquisite Victorian costumes by Linda Cho complete with bustles, boning and trains. No wonder the ladies had “the vapors” – they couldn’t take a deep breath. Add to that Ben Stanton’s fine lighting design.

Hughes makes good use of the piano at the back of the set; Yan Li is at the keyboard to provide background music – some of it recognizable and other parts written by Mark Bennet who also did the sound design. It is a perfect touch.

Boyd Gaines is magnificent as “the old gentleman.” He injects some humor as he mocks his younger self, empathy for the characters, and helps us understand these people. When he exits the stage, it hard not to feel pity for him and want to reach out to him.

Sierra Boggess plays the flamboyant countess who may be unconventional but seems to have the most developed sense of conscience and of proper behavior than any of the others. It’s a showy role and Boggess makes the most of it.

Andrew Veenstra plays Newland Archer, the very proper and conflicted young lawyer. Due to the unconnected short scenes, he has difficulty letting us really know this contradictory young man who begins to want to rebel against the expectations of the society.

Helen Cespedes plays Mae. She gives us hint that Mae has more cunning and awareness than we might think. It’s a difficult and unsympathetic role as she is so unwilling to break any convention.

Director Doug Hughes – would he please come back to Connecticut as an artistic director – sets a mood that doesn’t try to make these people easier to like than they are. He also stresses how contained they are in refusing to show emotions; these are people that you might characterize as “cold fish.”

Age of Innocence could be thought of us an “American” Masterpiece Theater drama. Certainly any who have seen “Downton Abby,” or the earlier “Forsyth Saga,” or the dramatization of the novels of Anthony Trollop or William Thackery will recognize these people.

Permission of Two on the Aisle.