Program in Art, Culture and Technology at MIT 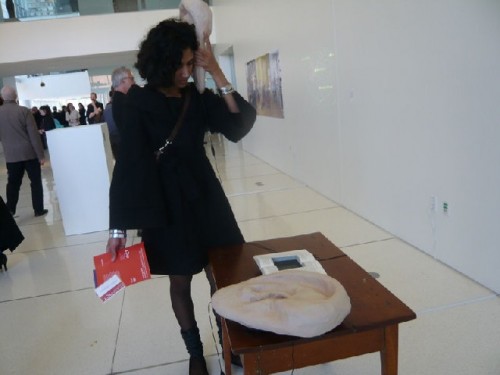 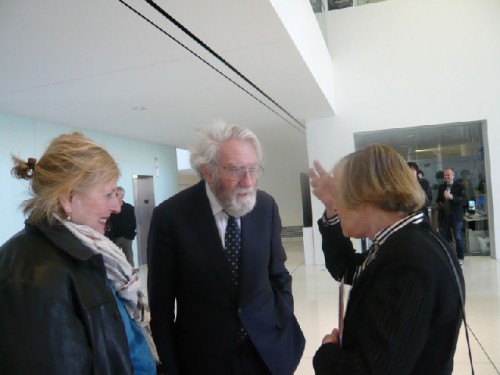 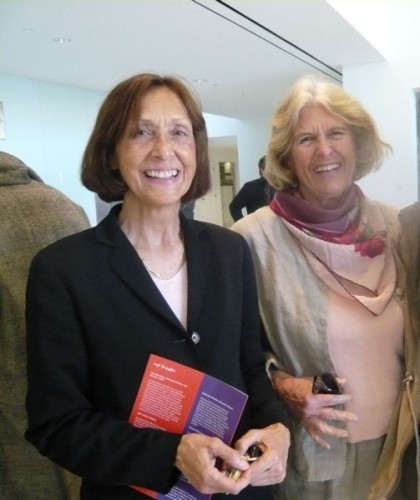 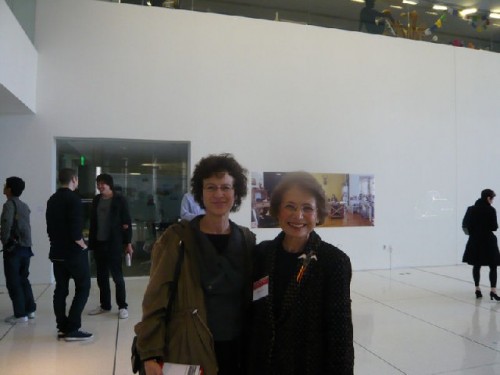 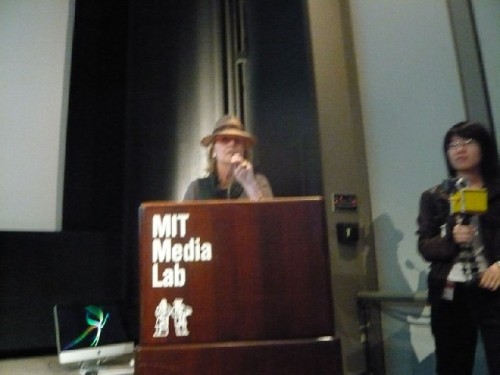 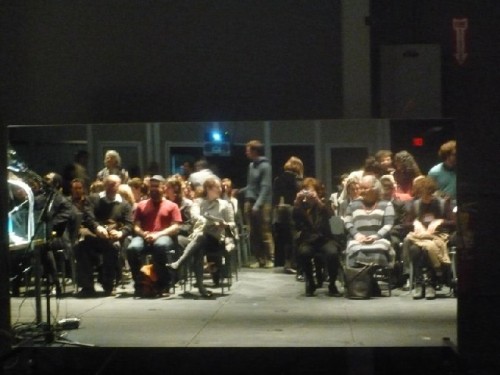 Reflection of the audience in the mirrored stage of the Cube 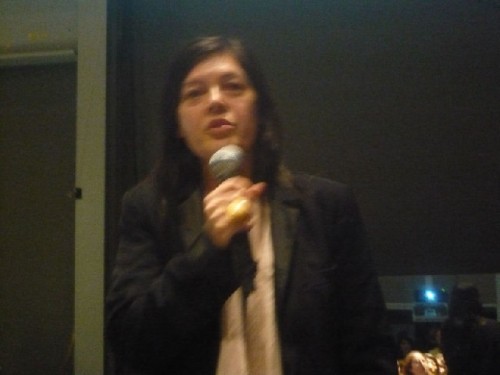 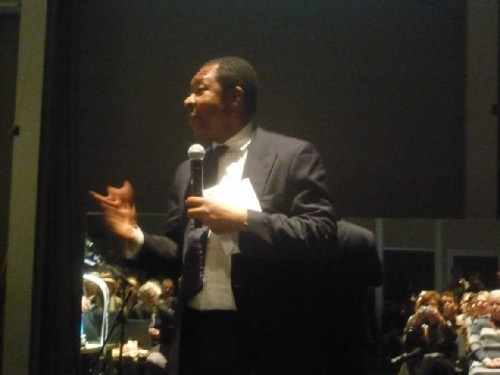 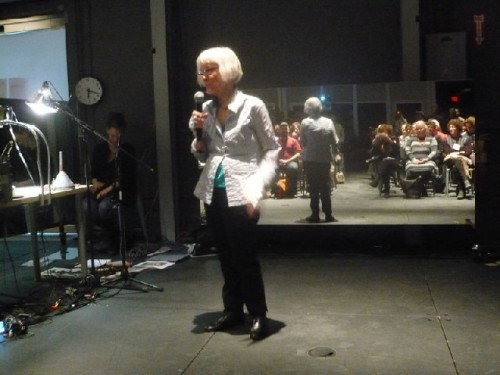 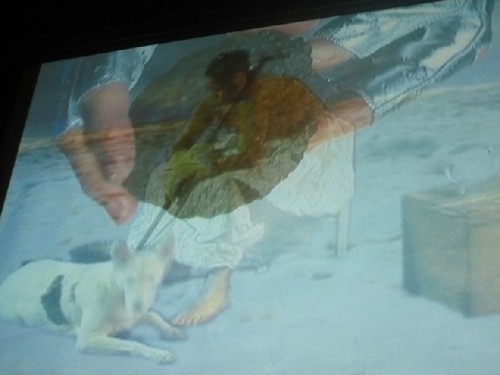 Projected image from Jonas’s Under the Glacier 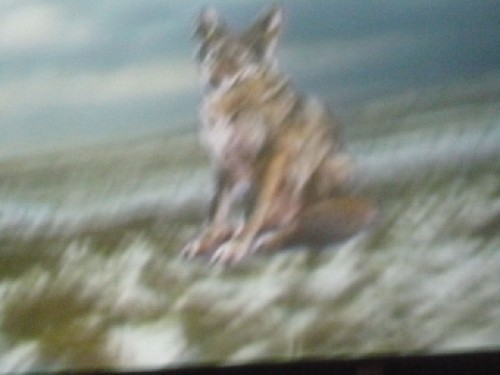 Projected image from Under the Glacier 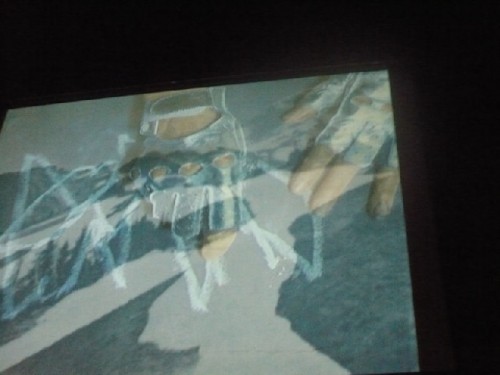 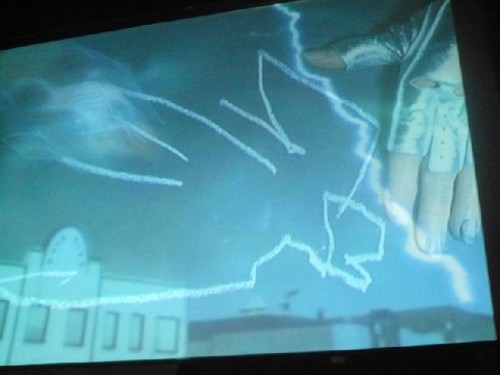 Another image from Under the Glacier 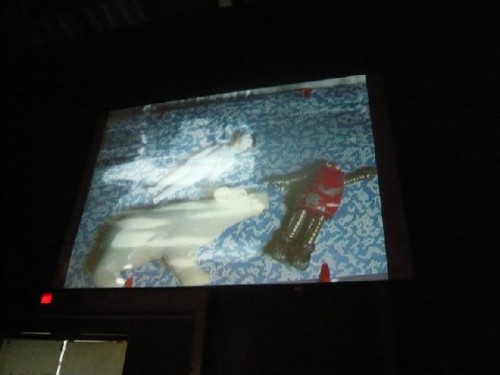 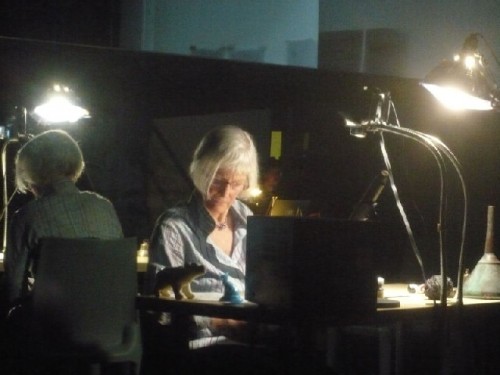 Jonas improvising at the console 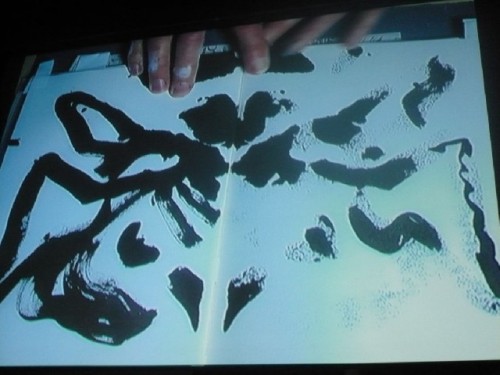 Jonas introduces black and white imagery into her projected story 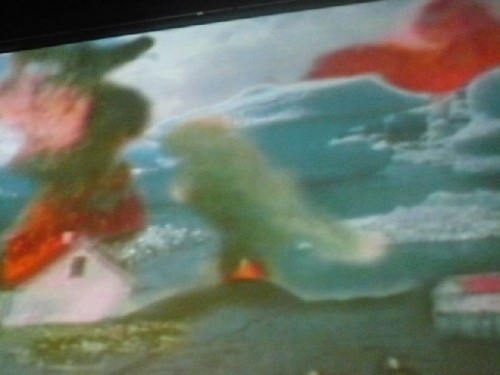 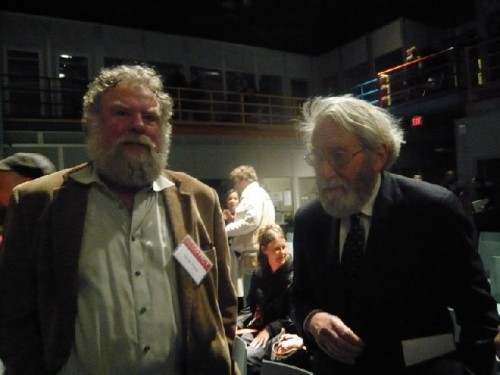 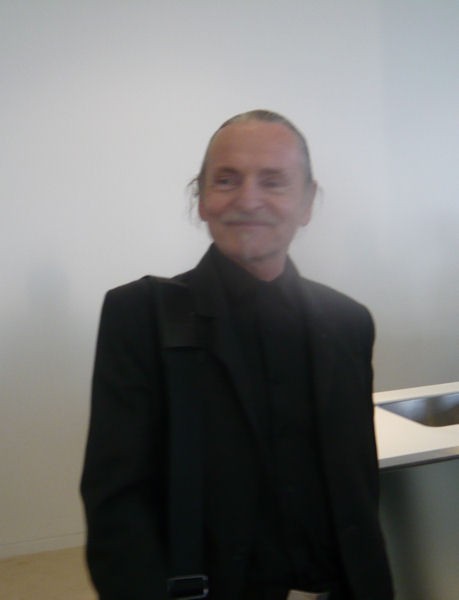 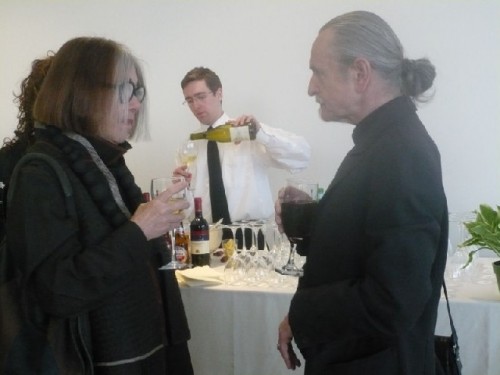 Dean of School of Architecture and Planning Adele Santos with Wodiczko 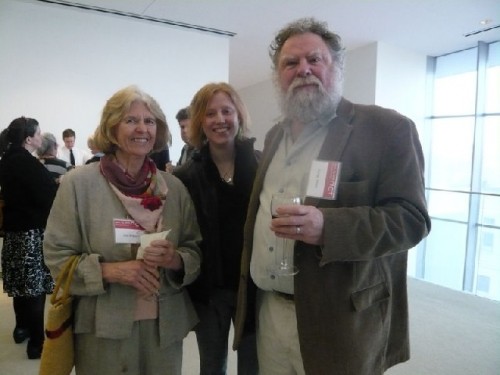 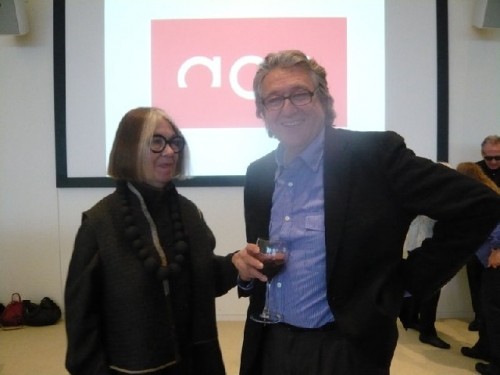 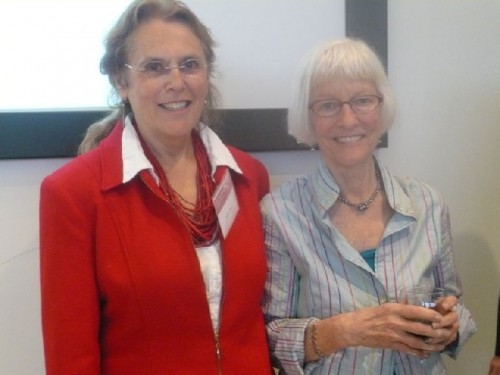 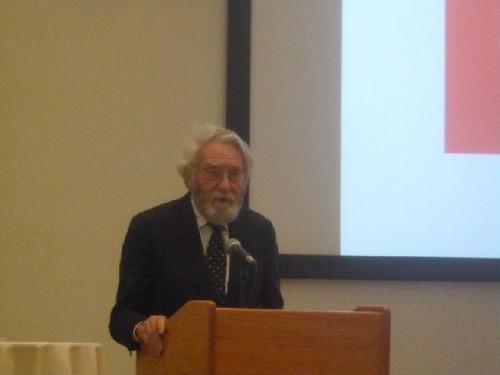 Otto Piene during his inaugural remarks 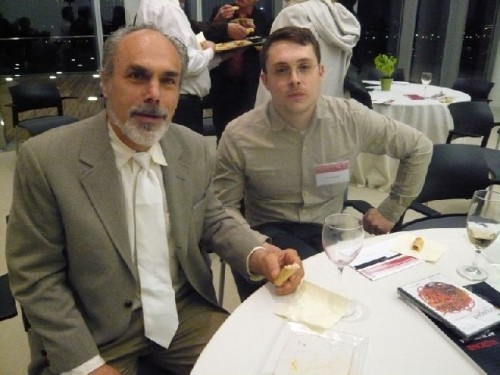 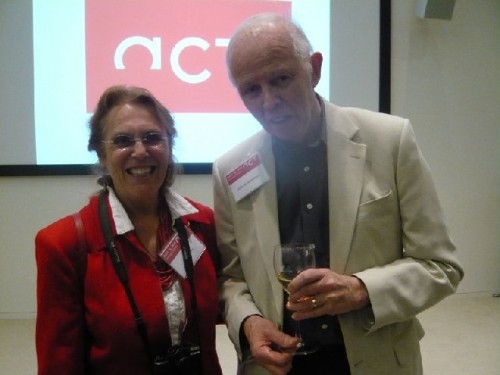 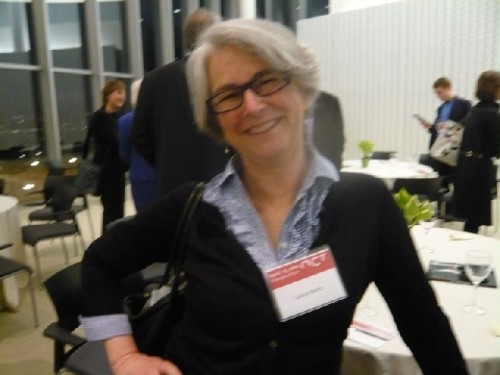 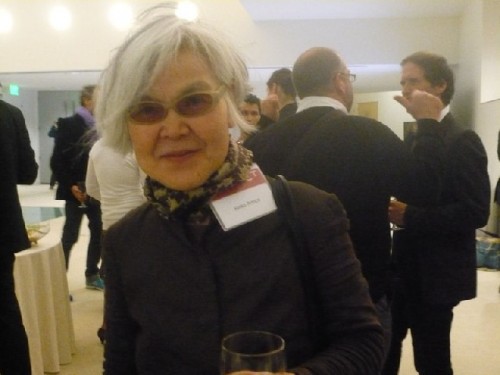 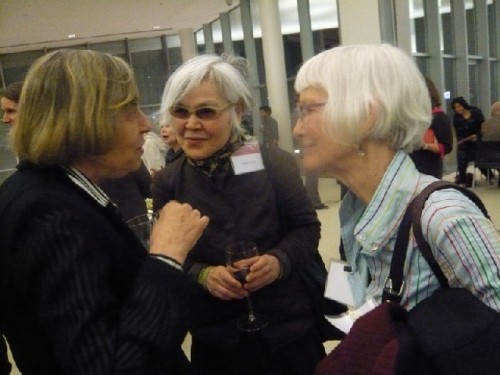 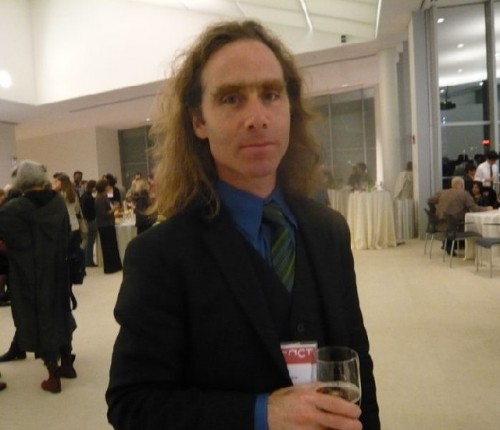 The Center for Advanced Visual Studies and the MIT Visual Arts Program, two prestigious units within the MIT School of Architecture and Planning, have merged to become the MIT Program in Art, Culture and Technology (ACT). The inaugural celebration took place on April 15, 2010, featuring a three-part event: an exhibition, presentations, and a demonstration by ACT professor Joan Jonas, recipient of the 2010 Gyorgy Kepes Fellowship Prize from the Council for the Arts at MIT.

Something like a proposition, an exhibition by candidates for the Master of Science in Visual Studies, is in the East Lobby of the Media Lab Complex. The artworks are based on a research model that encourages experimentation, active rethinking, and collaboration across disciplines. Among the eight works on display, Jess Wheelock's How to Win Friends and Influence People had a stream of visitors drawn to the sculpture's gigantic cast ears. Through sculpture and animation, the artist examines Dale Carnegie's work of the same title. In an animation placed in the cut-out center of the book, the artist is mentored by Carnegie, who gives advice and tools to help her deal with other people. Viewers may listen by donning the plastic ears. The exhibition is open until May 15; it was organized by Meg Rotzel, Coordinator of Public Programs for ACT.

Short slide presentations on projects by ten ACT fellows and affiliates were given in the Bartos Theater in the Wiesner Building. These projects provided insight into the long-term thematic research the presenters conducted in the field of art, culture and technology, such as the Interrogative Design Group, the Mobile Act Lab, the Future of Body/Multiple Senses project, and other forms of artistic research and transdisciplinary collaboration. The topics presented ranged from political theater, by puppeteer John Bell, to how the visually challenged perceive motion, by poet Elizabeth Goldring, who spoke about the Seeing Machine.

A demonstration by Joan Jonas followed in the Cube of the Wiesner Building. Jonas was introduced by curator and writer Okwui Enwezor.  Having worked with Jonas at Documenta 11, Enwezor stressed the sonic and retinal power of her work, along with its intellectual strength. He described Jonas's forty-year career in video/performance art as one of endurance and rigor, saying that contemporary imagination had finally caught up with her "immersive and liberating" work.

Professor Jonas, who has been at MIT for the past ten years, demonstrated a piece called Under the Glacier. Wearing silver metallic gloves, she performed from a console surrounded by digital media. As she projected images on a screen, she also manipulated them with her gloved hands, at times introducing props to the scene. From time to time Jonas created sound effects by crushing or rattling paper. She was assisted by a musician, who produced sounds on call. The stage of the Cube, with its mirrored backdrop, provided a magical setting for the improvisational magic of Jonas's work.

The Inaugural Celebration culminated with the Dean's Reception in the Winter Garden on the 6th floor of the Media Lab Complex. Adele Naude Santos, Dean of the School of Architecture and Planning, welcomed guests, who included past Fellows of the Center for Advanced Visual Studies, former faculty of the MIT Visual Arts Program, current ACT faculty, members of the Council for the Arts at MIT, and people professionally involved with art and technology in the community.

Dean Santos shared her excitement about the move of the arts at MIT from an academically invisible place to the new magnificent facility of the School of Architecture and Planning. She spoke highly of ACT's gifted faculty and students, hoping that ACT would become a department of the School in the near future.

Julie Kepes Stone presented the Gyorgy Kepes Fellowship Prize, named for her father, to Joan Jonas. Established in 1982 by the Council for the Arts at MIT, the Kepes Fellowship Prize is presented annually to a member of the MIT community who has demonstrated excellence and innovation in the creative arts: architecture, visual and performing arts, or writing. Jonas is retiring this year, but will continue her affiliation with MIT part-time.

Other speakers were: Otto Piene, Director Emeritus of the Center for Advanced Visual Studies; Krzysztof Wodiczko, Director of the Interrogative Design Group; Dennis Adams, former Director of the MIT Visual Arts Program; and Ute Meta Bauer, Director of ACT. In his remarks, Piene acknowledged founder Kepes's idea, energy and skills in relating art, science and technology, underscoring MIT's role in holding the torch for new generations. He recognized the contributions of the late Robert Preusser, Director of Education, and of composer and media artist Paul Earls for his many collaborations and operas. He also recognized John De Monchaux, Dean Emeritus of the School of Architecture and Planning.

Wodiczko recalled that "we must not only share, but argue and debate with each other." He emphasized the need for paradigm change, saying, "We must creatively disrupt to make people see what is to come." Dennis Adams saluted Otto Piene for his daring work with Group Zero, which advocated starting at zero with no prescribed notions. He thanked Piene for opening his eyes to the sky with all its possibilities. He encouraged the audience "to interrogate technology for its uses and misuses."

Ute Meta Bauer concluded the inaugural speeches by sharing her excitement over the MIT Program in Art, Culture and Technology, which will operate as a production-based laboratory for critical studies, connecting the arts to the advanced technological community. In keeping with artist and educator Gyorgy Kepes's vision of "art on a civic scale" ACT envisages artistic leadership initiating change and providing a critically transformative view of the world, with the civic responsibility to enrich cultural discourse.

Following these inspiring speeches, celebrants enjoyed wine, food and camaraderie in the Winter Garden overlooking the Charles River and the Boston skyline.