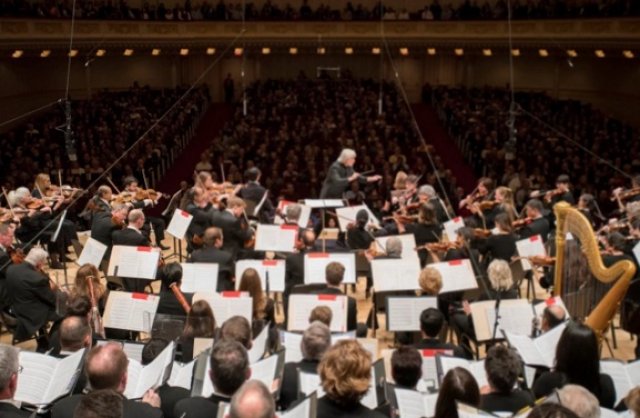 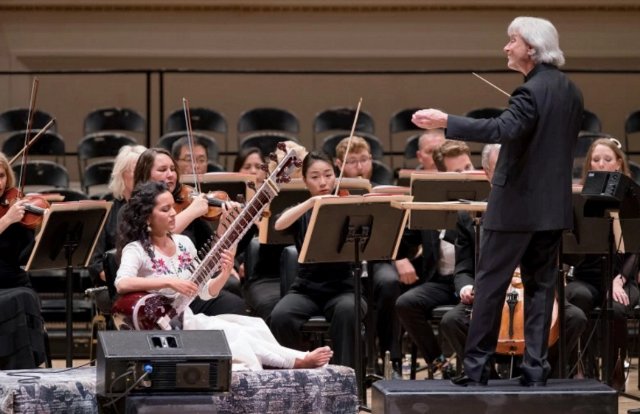 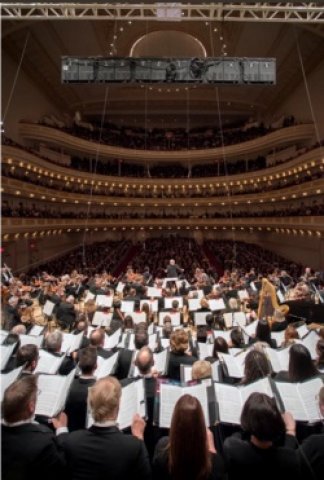 110 voices singing out into Carnegie Hall 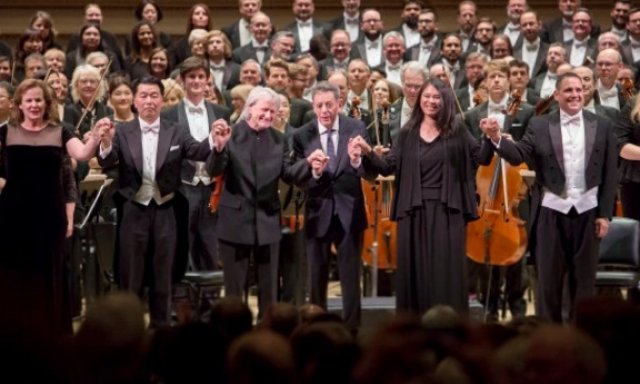 Philip Glass joins the conductor, soloists, orchestra and chorale to cap off the evening. (Photos by Jennifer Taylor)

Philip Glass holds the Debs Composer’s Chair at Carnegie Hall for this season. A concert honoring his work was performed by the splendid Pacific Symphony. Carl St. Clair conducted. He has been the music director of this symphony for decades. The performance made the benefits of consistent leadership over time clear.

Glass had met Ravi Shankar in Paris in 1965 while he was transcribing a Shankar film score. The two men hit it off. This evening showed us specific instances of how their pleasure in each other’s work made exceptional music.

Meetings Along the Edge is from Passages, a collaboration between them. They hoped to give the feeling of a meeting between East and West. One composer proposed a theme and the other elaborated on it. For Meetings, Shankar wrote the theme and Glass spun it out. The result is a gorgeous blending of two cultures. Flute, piccolo and soprano saxophone joined the strings and percussion of the orchestra. Mesmerizing rhythmic figures repeat, change and work themselves out to encourage the listener to hear in entirely new ways.

Shankar’s own Sitar Concerto No. 3 was written for his daughter who performed it. Like many composers from Asia, Shankar hope to combine forms from the East and West to deepen our understanding. The sitar gives this piece is distinction. Almost four feet long, it was laid out on a rectangular box covered by a rug. When Anoushaka Shankar swept on to the stage in a long white dress, she seated herself on the rug and exposed bare feet. During the overture in which she does not perform, she lightly tossed her head back, closed and eyes, transported by the orchestral prelude, as we were.

The sitar's difficulties were not evident a she plucked at the strings and drew forth melodic lines. The strings are metal which gives a special twang to their notes. Five melody strings are used for the tunes, and two drone strings give a steady beat. There may have been as many as 13 ‘sympathetic strings' under the fret to provide the raga, or specific scale of the melody. Slurs between the notes and the metallic quality of the strings give this music is distinctive feel.

Each of the selections seemed to crown the evening as it was performed. The Passion of Ramakrishna drew a picture of the last days of “M.” Sri Ramakrishna spent his life teaching by silence, so music seems a particularly apt way to celebrate his death. For Christians, the contrast between Christ’s end and Ramakrishna’s is striking. In the Eastern culture, there is drama as the days march on. Yet the presence of a mother, who in Christian tradition does not appear until the very end of  the passion, gives a sense of comfort here. She is called ‘mother,’ not ‘blessed virgin.’

Glass is particularly talented at writing for the human voice. The Pacific Chorale premiered this piece in 2006 with the Pacific Symphony which commissioned it. In a conversation between composer and conductor, the suspension of time was noted, although the conductor said that when he commissioned the piece he had asked Glass to keep it under an hour in length. Christòpheren Nomura and Elissa Johnston were spectacular as “M” and the mother, singing with a firm grasp on words and tones and with great beauty.

This passion seems thoroughly human in a way that the walk through Jerusalem does not, heretical as that may be to note.

“I was impressed by the devotion that St.Clair and the orchestra showed toward the music. I’ve never heard Glass performed like that before; it was a revelation,” said Raphael Mostel, a New York-based composer, lecturer and writer. No doubt that Carl St. Clair has a special touch conducting Glass.