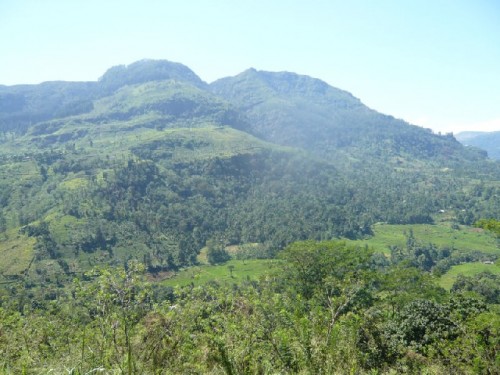 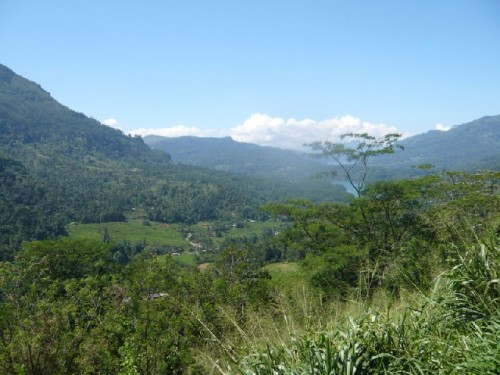 Another view of Hill Country 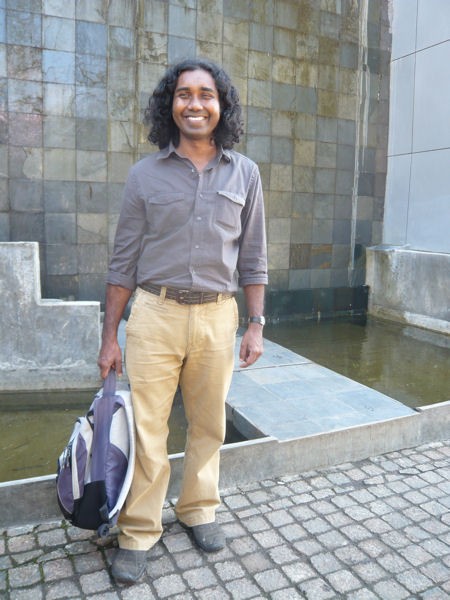 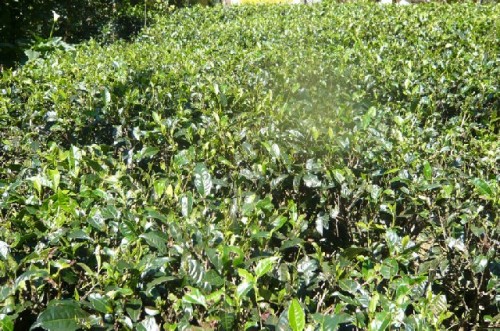 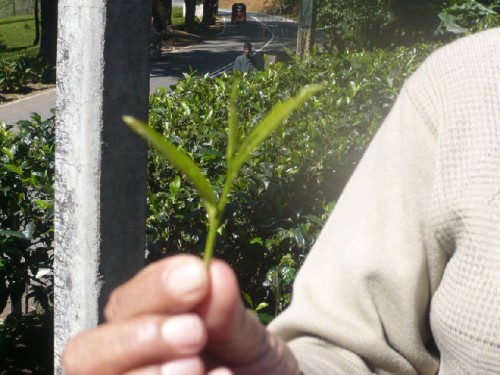 Part of the plant that is picked 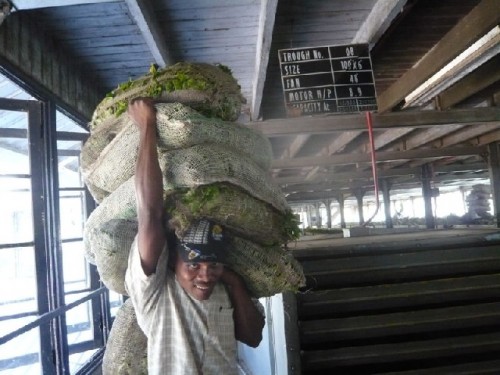 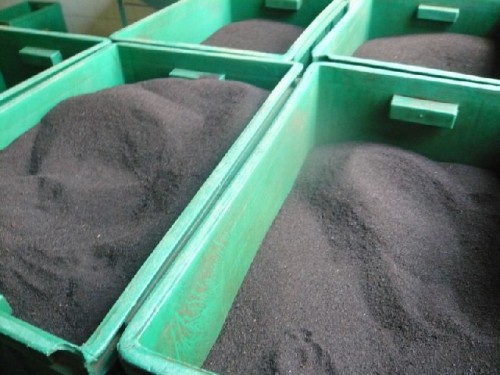 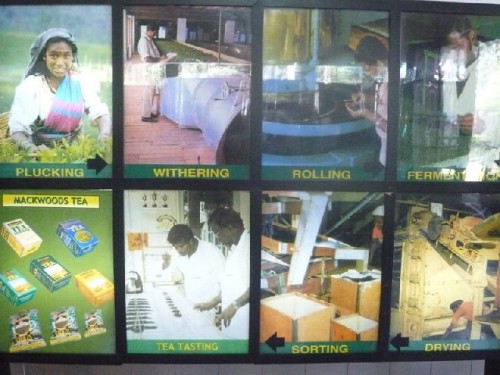 Journey of tea from picking to packaging 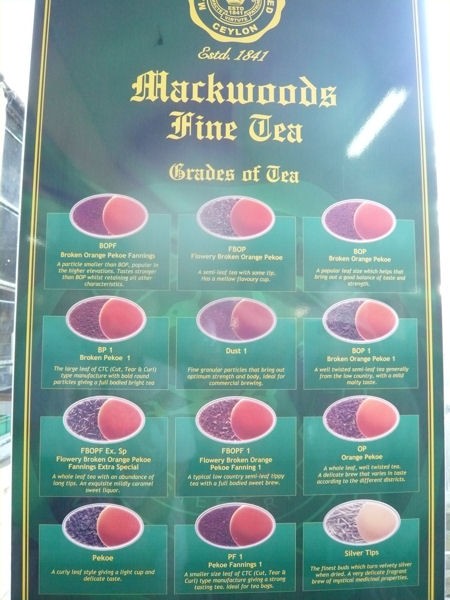 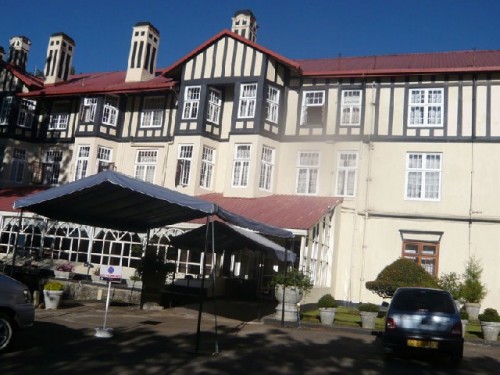 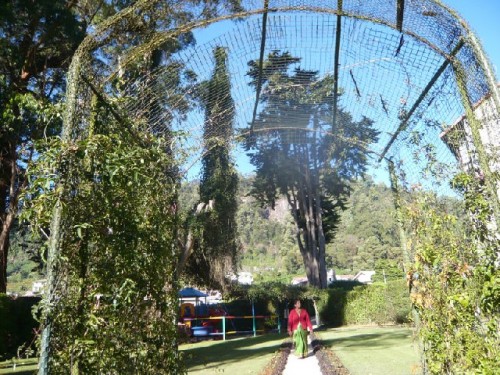 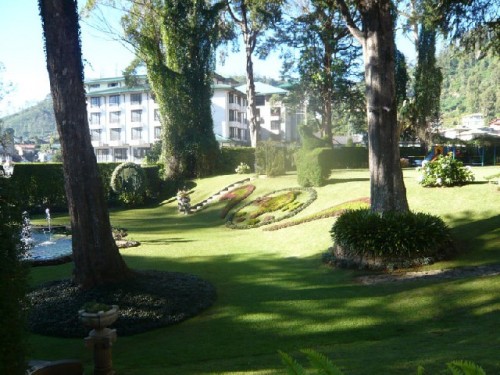 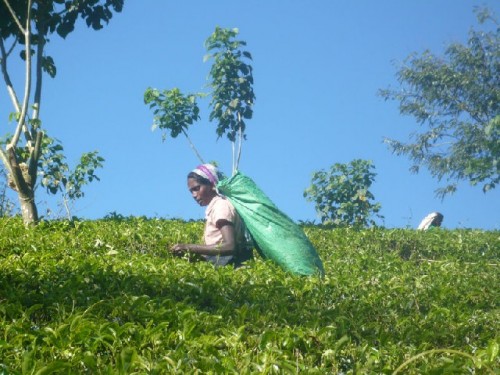 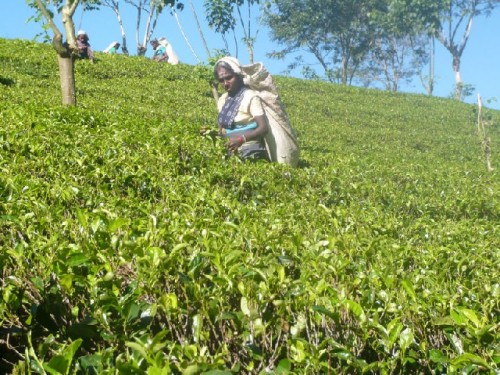 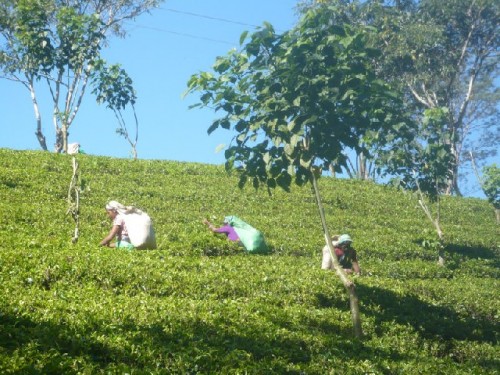 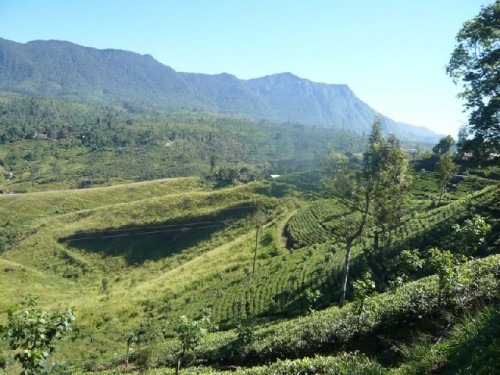 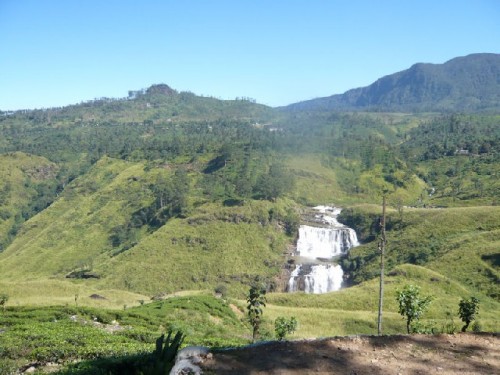 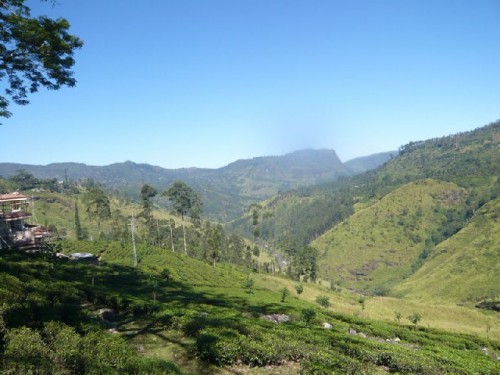 South side of Hill Country 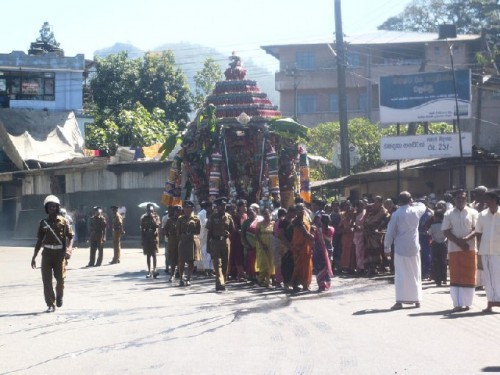 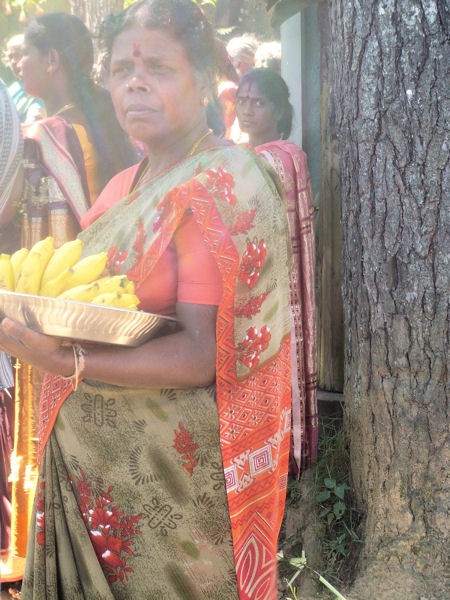 Devotee waiting for arrival of chariot 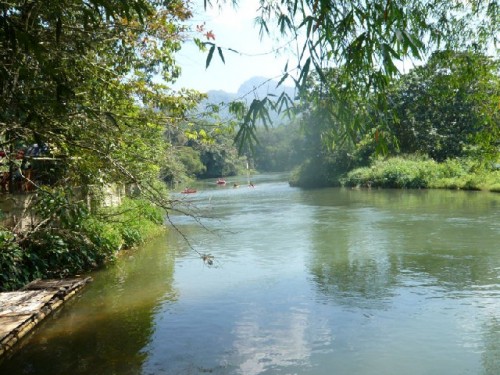 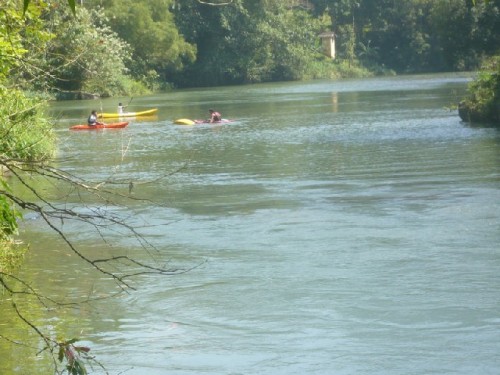 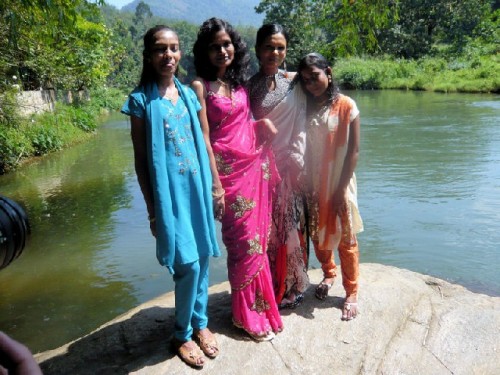 Mother with her daughters by the river 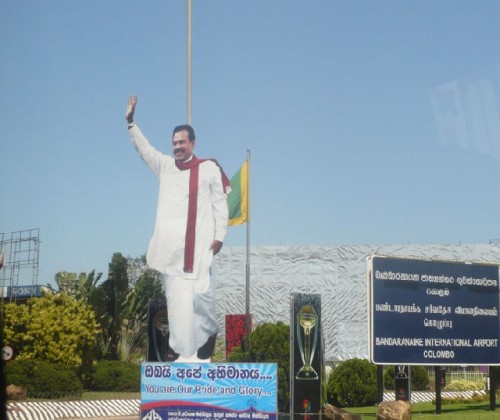 Statue of President Mahinda Rajapakse at gateway to airport 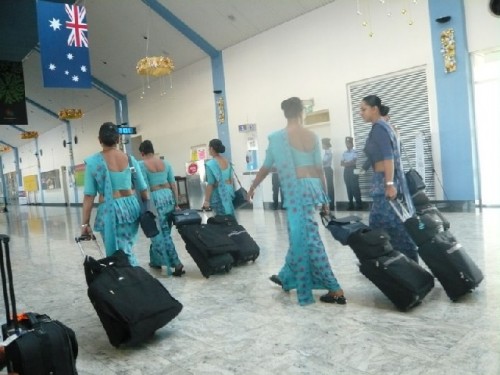 For the final leg of our trip we traveled to the highlands south of Kandy, known as Hill Country. Our destination was the town of Nuwara Eliya, known for beautiful landscapes and tea plantations at an altitude of 6500 feet; to reach it we climbed slowly on roads with hairpin turns through dramatic mountains. Waterfalls cascaded through verdant hills, glistening with tea bushes. In the nineteenth century it was the inspiring scenery that attracted the British to this place; they cleared the mountain wilderness to cultivate coffee, then introduced tea upon losing the former crop to fungus devastation. The combination of abundant rainfall, sunshine, cold nights, and mists, offers the perfect climate for producing the aromatic teas now known worldwide as Ceylon tea.

Halfway between Kandy and Nuwara Eliya our road skirted the magnificent Ramboda Falls, which tumble over the cliffs in 300-foot cascades. Shortly before reaching Nuwara Eliya, we stopped at the Mackwoods Labookellie Tea Factory and Estate for a tour. We walked among neatly manicured tea bushes, amidst lemon grass planted to prevent soil erosion. Bushes are pruned every few years to keep the size manageable for picking. Tea is picked during the cooler part of the day, between 6 am and 1 pm. Only the topmost bud and two leaves are plucked, in order to guarantee freshness and purity; then in the factory the leaves are withered by blasts of hot air. Rolling releases the remaining sap and triggers fermentation, following which the leaves are dried in ovens to produce black tea and sifted for grading by size.

Based on the size of the leaf fragment, the finished teas are given names such as broken orange pekoe, orange pekoe, etc. So-called dust, a low quality tea, is used in tea bags. Sri Lankan teas are also ranked according to their height of origin. “High-grown” teas, cultivated above 3000 feet as in Nuwara Eliya, are the finest; “mid-grown” or “low-grown” teas, produced in the foothills, are full-flavored and coarser. Expert tasters classify the teas according to strength, flavor, and color. Following this educational tour, we enjoyed freshly brewed tea in porcelain cups in the garden of the estate; then we had the opportunity to visit the gift shop, which was doing a brisk business. Since I was only in the first week of a seven-week journey, I refrained from stocking up on tea, but did purchase a mug.

The brightly dressed Tamil tea pickers, amongst glossy green bushes with breathtaking distant views of valleys and mountains, form one of Sri Lanka’s indelible images. Initially recruited by the British as seasonal workers due to a labor shortage, Tamil plantation workers stayed on when tea cultivation required year-round labor; thus they settled in the hills, changing the ethnic composition of the region. To this day their descendants suffer poor living standards and remain among the low-paid in the country. Each laborer stakes out an area and is able to pick twelve to fourteen pounds of leaves a day; tea is picked twice a week in the wet and once a week in the dry season. The daily wage depends on the weight of a wicker basket taken to the factory when full, and is usually around seven dollars. Only recently have Tamils working on plantations been recognized as citizens. Because the reality behind the picture-postcard image is grim, photography comes at a price.

The town of Nuwara Eliya, which has a distinctive British flavor, is known as “Little England.” Built in the nineteenth century, its architecture mimics that of an English country town, with brick walls, country clubs, and mock Tudor half-timbering. Sri Lanka’s wealthy, who are in the shipping business or deal in gems, enjoy this area, with its mild climate and breathtaking views, as a holiday retreat; their bungalows, along with guesthouses and hotels, dot the hills. English-style agriculture, introduced here more than 150 years ago, is still going strong; beets, cabbages, leeks, potatoes, and strawberries thrive in the mild climate, replenishing wholesale produce markets daily.

The Colonial Grand Hotel, where we stayed overnight, gave us a taste of British country life. This massive old structure with its landscaped lawns and topiary has a huge ballroom, an Edwardian tiled dining room, and a Victorian lounge.  Wedding preparations were underway in the ballroom, with a photo shoot of the bride. The photographer would not allow me to take pictures, so I was unable to document the beautiful bride in her lavish gown. Astrology plays a big role in the lives of Sri Lankans. Astrologists are consulted to determine the most auspicious times for marriage, starting a new business, or breaking ground for a new home.

In the morning we headed back toward Colombo, southwest of Nuwara Eliya, driving by hills terraced for growing vegetables and more tea plantations. From a distance dark-skinned Tamils picking tea leaves in their colorful saris looked like giant birds among the tea plants. As I rushed to photograph them, I made sure I had rupees to distribute. As we continued on the road we heard what we thought were dogs barking; but our guide, Sumedna, said they were leopards who lived in the dense rain forest further away. More plantation laborers appeared on the hills; this time they were men fertilizing and pruning the plants. Pilgrims passed us on their way to Adams Peak, where a footprint at the summit is ascribed to the Buddha. There are 8300 steps in the climb, which takes four hours.

In the town of Hatton, we happened upon a Skanda Hindu ceremony. Skanda is the God of War, worshipped in Sri Lanka and South India, where each temple is dedicated to a particular God. Once a year Skanda is taken out of his temple, put in a chariot, and pulled by devotees through the streets for all Hindus to see, as lower-caste people may not go into the inner temple chamber, where Skanda resides. We watched men prepare the chariot in the midst of a big crowd, burning a lot of incense; the rising thick smoke made photography difficult. I was unable to get a glimpse of the god.

Descending to the rain forest area, we passed by a rubber plantation. Rubber is tapped twice a day; it is a major export item for the country, providing 3% of its gross national income. We stopped for lunch at the Plantation Hotel in the Kelari River valley, where people come for bird-watching and white water rafting. Young locals here act as guides. This is a beautiful setting for family outings as well. Seasonal tropical fruit — banana, papaya, pineapple, pomela, and star fruit — was in abundance.

Finally we descended the mountain and came onto a flat paved road for the last three hours of our trip. Our driver stopped periodically by roadside shrines to ensure us a safe journey. We arrived in Colombo during rush hour, which is between 4:30 and 6:30 pm. It was mayhem entering the city. Passing by children trying to keep cool in white school uniforms and many motorcycle shops selling parts, we inched our way through fanfares of bus horns and choking fumes to the Hotel Galadari, at the southern end of the Fort region on Galle Road across from the Parliament. As this was a high-security district, we were advised to take photos only facing the Indian Ocean. Although our hotel faced the water, the vehicular cacophony kept me from crossing Galle Road to take pictures or to explore this strip of modern-day Colombo.

Fortuitously it was seafood night at our hotel. At our farewell dinner we were treated to a buffet of seafood — shrimp, prawns, squid, and fish — prepared in a variety of ways. My parting gift from the hotel shop was a packet of toothpicks made from the carved stem of a coconut leaf.

The next morning our flight to Chennai, India required an arrival time of three hours before departure. When we arrived at the airport, we found that our flight was delayed by two and a half hours. I spent some of this unexpectedly long wait browsing the airport shops. I could not resist purchasing a silk jacket hand-crafted in Sri Lanka. With five more weeks ahead of me, I hoped that there would be no further delayed flights to tempt me at airports as I traveled.