Rossini and Offenbach Fresh and Full of Life 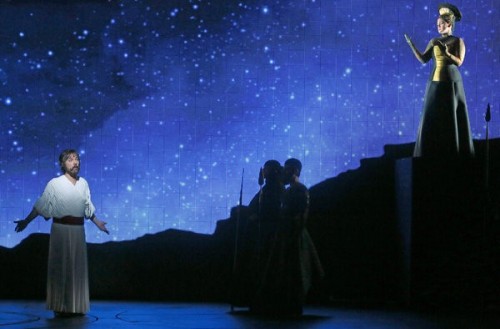 A dark and starry night 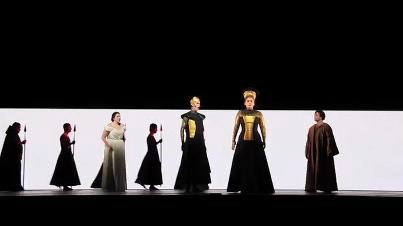 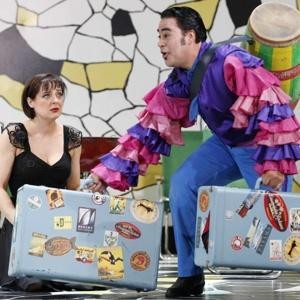 This spring the New York City Opera has returned to its roots at City Center in New York. Rossini’s Moses in Egypt was first up, and beautifully done.  One of the grand themes of human history, the Exodus, was presented with appropriate grandeur.

Only images that seemed more Rhine maiden than drowning Egyptians might have benefited from the version of Moses that Riccardo Muti once led. Planks that evoked waves rose up to let Moses and the Jews pass through and then clamped together to keep the Egyptians out.  No mystery, however, because the audience in the orchestra could watch the boys who were moving the oars back and forth from under the sea.

The beautiful prayer of the final act was written for the first draft of Moses after Rossini was overcome by the need to cover up the boys on stage by composing a solution.

George Steel, the managing director of the opera, has come up with a mission that fits the City Opera’s history and locates the company in a good place in the New York opera scene.

There is no question that the Met is going to nab singers that debut with the City Opera. But that has always been so. More adventurous and committed to promoting up and coming talent, City Opera does the important legwork in giving young singers a chance to strut their stuff.

In Moses, the stand out talent was Sian Davies, a soprano who inhabited the role of Elcie.  Her voice is a natural, riding always on the breath and using it to provide dynamics and a lovely shaping of the lines. The Met has already nabbed her as Clotilde in Norma next fall.

Keri Alkema, the soprano singing Almatea, was also special.  She is a particularly gifted actress.  New to soprano roles, the range suits her.  Like her marvelous Adalgesia at Caramoor, she displayed a husky lower register and a bright, edged top.  Next year, she will sing the Countess Rosina Almaviva in the City Opera’s production of The Marriage of Figaro directed by Christopher Alden.

In Paris, Rossini’s Moses in Egypt put an end to the French “shouting” style of singing. France proclaimed a lyric revolution: “an infusion of fresh singing sufficient to rejuvenate that old and feeble remnant of the ancien regime which is called the opera.”  (Le Globe).  Certainly NYCO made it seem robust and present.

Halevy as librettist seems more likely for Moses than La Perichole, but there he is, creating a crème puff of buffoonery. Silly as the story is, Prosper Merimee had based his play on a real incident between a coquette and the Viceroy of Peru.

La Perichole, ‘a nice bitch,’ ensnares the Viceroy. Imports from Europe mezzo Marie Lenormand and tenor Philippe Talbot, whose unanimous prize for "perfection" comes as no surprise, graced La Perichole.  Kevin Burdette, in whose embrace I exited the orchestra at intermission, was terrific, his pleasing, natural base in stark contrast to the high camp of his performance.

The loveliest number of the score is La Perichole's song in which she writes her impoverished lover to explain why, for harsh material reasons, she had had to accept the advances of the rich Viceroy.  Another aria sung after the Viceroy has fed her  ” I’m just a bit drunk, but shhhh, don’t say so" wavers, trembles on the edge of collapse, but never quite tumbles over La Perichole.

Boleros, seguidillas and gallops to color an exotic picture of 18th century Peru.  The finale of Act I has a kind of sweetness and vigor held together by the pulse of a swinging march.  One Perichole past wore a dress made of real diamonds.  Lenormand’s might have been, to accompany the lush beauty of her singing.

In both NYCO productions an evenness of ability and talent was clear.  What pleasure to have such good talent across the boards.

In the intimate setting of the refurbished City Center, small details carry well. Everyone in the audience could enjoy the Greek-vase arm positions of the Egyptians.  In Perichole, comic gestures abounded and so did laughter at each motion.

Opera comes in all sizes and shapes.  But today’s audiences want intimacy and warmth, and the director of Perichole, Christopher Alden, sounds like he really appreciated the chance to go for up close silly and slapstick.  Perichole’s plot is not one of the more wrenching in the repertoire, even though failed love affairs, kingly appropriation and unjust prison sentences crop up.

New York City Opera has received overwhelming acclaim for its current season. They went down tethered to the ungainly Koch Theater at Lincoln Center.  Board member Susan Baker made an effort to move the company out of Lincoln Center over seven years ago.  No one has solved the mystery of the failed move.

Clearly NY City Opera suffered terribly when it was bound to the Koch.  The distinguished New York Philharmonic deserves a better hall.  The Metropolitan Opera can’t fill the house for its live performances, which are needed to mount the (theoretically) financially successful HDs.

The good news is that under George Steel, the City Opera is back with punch and pizzazz, attracting audiences of all ages, and restored to its perch as a treasured New York institution.  It gives us opera, as it should be: Fun, beautiful, and not prohibitively expensive.