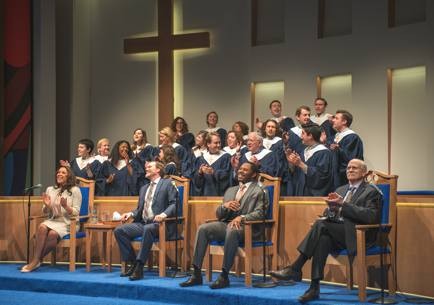 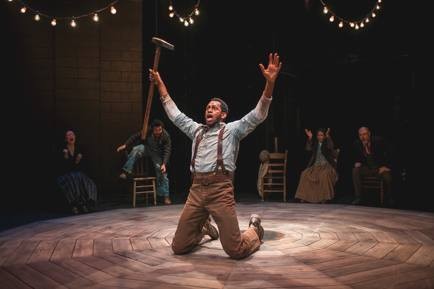 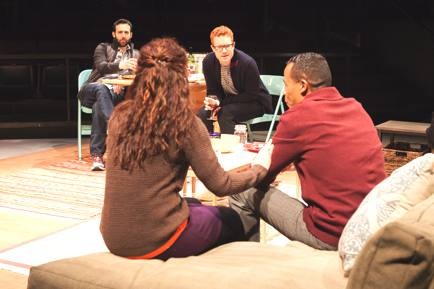 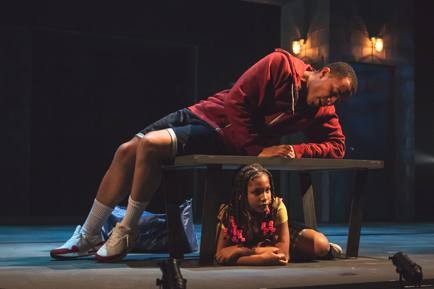 One of the perks of being a theatre critic is that one gets to see the world from different perspectives.  As a member of the American Theatre Critics Association (ATCA) we have the opportunity to not only see and review theatre in our hometowns, but we get to enjoy discussing the state of the American theatre with our colleagues at the association’s annual conference held in a different city each year.

This year the site of the ATCA conference was held in Louisville, Kentucky, during the first week of April.  One aspect of our conference is that we try to hold it in a city that is associated with a national Theatre Festival, like The Humana Theatre Festival of Louisville or the Contemporary American Theatre Festival in Sheperdstown, West Virginia.  The Humana Festival, in association with the Actors Theatre of Louisville (ATL) now in its 38th year, afforded ATCA members the opportunity to see, discuss, and review the new work of emerging as well as established playwrights, directors, actors, and other theatre professionals.  It’s a peek into the future of the American theatre scene.  We saw eight new American plays performed by Equity actors that I will review in a mini-review format.  All the productions are performed without an intermission.

“brownsville song (b-side for tray)” written by Kimber Lee is a play about gun violence in Brooklyn, NY and the fall out from the senseless death of a promising young black  teenager preparing to enter college and then onto a possible career in professional sports.
The premise of Lee’s play may not be new material, but it’s definitely worthy of examination due to the heart-brake of the families affected by this on-going problem in America’s inner-cities.  The story directed by Meredith McDonough resonates in its relevance in the lives of young black men in America today.

The cast is uniformly solid, with standout performances coming from Cherene Snow as Lena; John Clarence Stewart as Tray; and Sally Diallo as Devine (talented 10 year old performer with a future in the theatre if she so chooses).

“Partners”, by Dorothy Fortenberry, and directed by Lila Neugebauer, is a comedy that features four actors: three men and one female.  One couple is in a traditional marriage; the other couple is a gay partner relationship with an eye toward making it into husband/husband relationship.

The first twenty minutes unfold like a pilot for a TV sit/com.  The writing is sharp, witty, funny, and at times, is a little too slick.  All that is missing is the laugh-track, however, the performances are first rate: Annie Purcel as Clare, is an aspiring chef.  Her non entrepreneurial- like husband Paul, is played by David Ross.  Kasey Mahaffy as Ezra, is Clare’s business partner.  The two are trying to launch a food truck business.  LeRoy McClain as Brady, is Ezra’s partner.  Money is always a problem for start-up businesses.  That along with each couple coming to grips with their situations, makes “Partners” a one-act play with promise.  But, alas, the second half of this one act vehicle, shifts gears and suffers from running out of gas, to say nothing of an implausible plot twist near the end.  It might, however, become the basis for a new comedy TV series.

“The Christians” written by Lucas Hnath and directed by Actors Theatre of Louisville, Artistic Director Les Waters, has the best chance of being produced in the commercial arena, and is a strong candidate for Regional theatres and/or educational and community theatre venues.   The play revolves around a charismatic and highly successful married pastor of a Christian congregation, who suddenly announces that he has had a change of heart concerning the Bible’s representation of the place known as “Hell”.  In fact, he claims there is no such place.

This stunning declaration throws the church and its followers into a tizzy.  Sides are taken.  Should the church ask Pastor Paul to leave?  What’s the position of the associate Pastor?  (He disagrees with Pastor Paul).  Even Pastor Paul’s wife waivers on which side of this explosive and dividing religious issue she will come down on.  Will she support her husband’s new position? Or will she stand with the majority of the congregants?  Everyone is on the horns of a dilemma.  Hobson’s choices are rampant in this very provocative and cleverly written play set against the backdrop of religion and The Bible.

Technically, it’s a well produced, one set design production.  The stage literally becomes a church in look and feel with a full choir.  As to how convincing the services are: At the point, where Pastor Paul says to the congregants “Let us Pray”, heads in the audience lowered as if to join in the prayers.  Now that’s really being caught up the moment of the onstage performers!

All of the verisimilitude of “The Christians” is accomplished without any of the actors raising their voices when stating their feelings and positions.  That’s just good old fashion inspired direction on the part Les Waters who wonderfully orchestrates the voices and their pacing.  The power comes from the writing and the acting.  The principal actors are:
Andrew Garman in the convincing and mesmerizing role of Pastor Paul; Larry Powell is equally charismatic as the Associate Pastor; Linda Powell as Paul’s wife; Emily Donahoe as an outspoken congregant, and Richard Henzel as the church Elder.

Look for a production of “The Christians” in a theatre venue near you in the next couple of years.  It’s worth a visit.  This is my choice for Best play of the 2014 Festival.

“The Grown-Up” written by Jordan Harrison and directed by Ken Rus Schmoll is somewhat of a fantasy trip which flashes forward and backward in its telling the story of a “magic doorknob”.  When it’s applied to different doors, it moves the story line and the actors and the location.  Matthew Stadelmann, is the character we follow from childhood filled with bad dreams, through troubled teen years into adulthood, and eventually in to old age. The sea is very important to the narrative of the piece but the ultimate payoff failed to engage me.  I spent too much time trying to figure out what the playwright was attempting to say.

The most ambitious of all the plays presented at this year’s festival is  “The Steel Hammer” written by four different playwrights, in four different disciplines: acting, dancing, musical accompaniment, and classical movement.  The piece is the brainchild of gifted director Anne Bogart.  She asked writers Kia Corthron, Will Powers, Carl Hancock Rux, and Regina Taylor to create a piece about the mythic black folk hero John Henry, the legendary railroad man who drove spikes faster and longer than anyone else in competitions across the country.

Bogart then adds her personal vision of how best to tell the story of John Henry.  The result is a daring and very physically demanding two-hour performance that is not only hypnotic in its execution, but is one that assaults the senses and one’s endurance as well.     There is no doubt, however, as to the power of the piece’s creative force at work. But some may find the visual and auditory experience a little overwhelming.   I was told that this performance piece will be moving to New York later this year, with live musicians, instead of the recorded tracks we heard in Louisville.

“Remix 38” is a 19 actor, 9 playwright effort of the Ensemble Interns of the ATL.  The topics presented covered all of the human emotions that passionate young people care about: The society they’re growing up in and its future; sex; love; family; sex. adventure; sex;  relationships, sex;  Do you sense a theme developing here?  If you do, then you have plenty of company.  My only caveat regarding plays with loads of simulated on stage sex and the directors that stage these scenes is: Remember, sex scenes are not a spectator sport.  Don’t overdo a good thing.

The seventy-one critics and guests who attended the ATCA conference ended their festival participation, with the awarding of the prestigious 2013 Steinberg Play Award which went to San Francisco-based playwright Lauren Gunderson for her play “I & You” along with a check for $25,000.00.   She also was the American Theatre Critics Association keynote speaker on the association’s “Perspectives in Criticism” segment earlier in the week.

All in all, the 2014 Humana Theatre Festival with the talents of the Actors Theatre of Louisville was a rewarding, adventuresome experience with colleagues Charles Giuliano of Berkshire Fine Arts, Eddy Rubin, New York theatre and arts critic, ATCA Chair of the Executive Committee and Chicago critic, Jonathan Arbarbanel, Florida critic Pam Harbaugh, Wendy Parker, Midlothian, VA critic, Ira J. Bilowit, long time New York City  critic and theatre legend, among others.  The general consensus among the group is the American theatre scene is still strong and upbeat.  But we’re ever alert to new trends and shifts in tastes, and we’re all eager to see more creative and exciting writers emerge from the playwriting pipeline.  Next year our conference will be held in New Orleans.  Ah, great gumbo, shrimp, and Cajun cuisine, Bon Appetite!