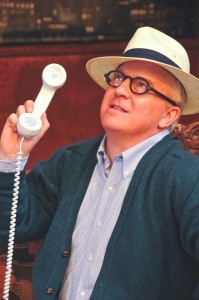 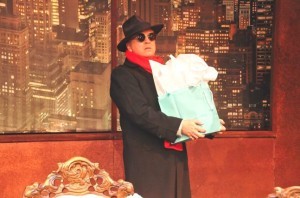 A brilliant one man show. 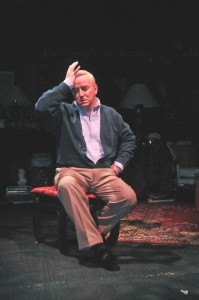 Such an outrageous character.

Every now and then an audience is treated to “theatrical” lightning caught in a bottle.  It’s a time when all of the planets and stars align in perfect order producing special moments. That is definitely the case with the Coyote StageWorks enthralling production of “Tru” at the Annenberg Theatre in Palm Springs, starring Chuck Yates as Truman Capote.

Capote was an irascible, prickly, quirky, lonely individual, who claimed very few close friends, but enjoyed hundreds of acquaintances – mainly celebrities like himself.

“Tru”, deftly directed by Larry Raben, from a wonderfully insightful script by Jay Presson Allen (who really knows her subject), is culled from Capote’s own work and words and is brilliantly brought to life by Coyote StageWorks’ artistic director Chuck Yates.

I know, I know, we’ve all heard that overused and sometime undeserved, adjective in describing an actor’s performance.  But in this case, the shoe definitely fits.  Or perhaps, I should say the body performing on stage is indeed Truman Capote, or as close as anyone is ever going to get in portraying him.

Capote was a created public persona, by the man himself.  He had a knack for the bizarre, both in his fashion and in his writing style, and most definitely his lifestyle.  He was an openly gay writer when society demanded discretion from their beloved public figures and celebrities. He was a man who knew himself better than anyone, and he knew how to market himself.

In Yates’ one-man tribute performance, it’s his channeling of Capote and the resulting performance that rings so true and authentic. Capote was an interesting individual, there’s no doubt about that, but one has to get past his “bitchy” side, and peel back the protective armor guarding this lonely, creative soul.  It’s in these inner and personal emotional onstage moments that Yates just shines.  The pacing and timing, plus the vision of director Raben, is what wins the day in this poignant and fascinating production.

Raben has assembled a first-rate creative team to support this splendid production beginning with a breathtakingly realized Scenic Design by Josh Clabaugh, of Capote’s New York apartment overlooking the East River and Manhattan.  The apartment is richly decorated with photos, books, and memorabilia worthy of a world-class personality, including the gleaming Steinway piano. The Lighting design by Phil Murphy nicely paints shadows and moods that complement Clabaugh’s eye-popping performing space.  The many props supplied by Steve Carter, also lend a verite to the entire proceedings.  Capote was a heavy drinker of alcohol so plenty of liquor bottles are omnipresent, as are the many knick-knacks collected in a lifetime of traveling the world.

The collaboration between Yates, Raben, and Ms. Allen’s script is key in not only understanding the enigma that was Capote, but it’s essential to have a personal vision of how best to tell the story of this character of celebrity.  The private Capote, the man with a giant intellect, biting wit, and a devilishly charming personality has been brilliantly brought back into the public spotlight again by actor Chuck Yates.  It’s an evening in the theatre one doesn’t soon forget.