A Darwinian Love Story at the Lookingglass Theater 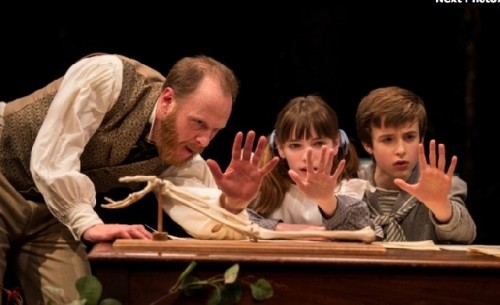 Andrew White, Jonathan Babbo and Caroline Heffernan examine tails and wings, speculating on the evolution of the human hand. 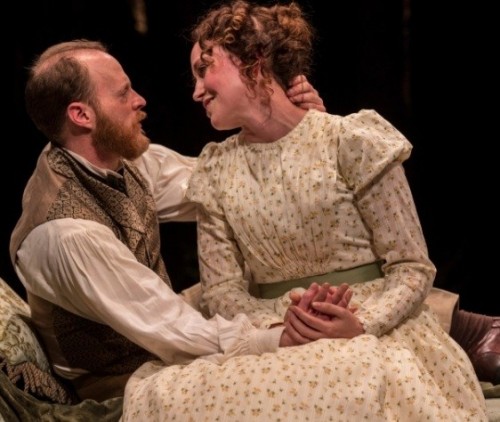 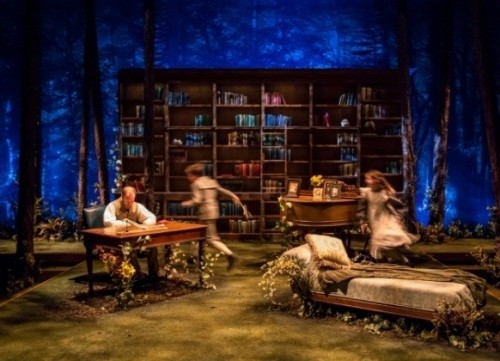 Colette Pollard’s set suggests the fecundity of the Darwin household.

The Lookingglass Theater is presenting a world premier by one of its associates, Sara Gmitter. In the Garden is a passionate portrait of a marriage of intellectual equals who respect each other but agree to disagree. Sort of.

Darwin entered the marriage aware that his wife Emma’s deep religious convictions might conflict with his search for truths in the real world. His father’s advice: Don’t talk about your religion. Or lack thereof.

Lie, asks Darwin?   No, his father replies. Just don’t talk about it.

Darwin it turns out is too honest for that, and the couples’ play on the subject of ‘why’ is one of this play’s enchantments. Charles and Emma, performed in brilliant tour de forces by Andrew White and Rebecca Spence, making her company debut, are witty, on point struggles.

These do not, however, conflict with the fecundity of their marriage. We meet on stage the first and second born of the Darwin’s ten children. Willie, the eldest, immediately becomes the object of his father’s whys. Even the butler is pulled into acting ‘sad’ and ‘frightening’ to see how the baby will react.

Costumes charmingly capture the period. The set, conceived and built while the designer Colette Pollard was pregnant, captures the Darwin’s fecundity. The main room of the house, where Darwin writes, Emma and Annie play the piano, and everyone tumbles on the recamier, has been invaded by plants. They use the desk legs as stakes to wind on, and surround the recamier.

Darwin’s papers are everywhere. So are his whys. Willie as he grows up ingests his mother’s view of God. Jonathan Babbo well captures the child’s concern about betraying either of his parents by expressing contrary opinions.   Annie is more like her father. Caroline Heffernan is a familiar actress in Chicago. At age thirteen she has appeared at the Lyric Opera, and the Goodman, as well as her brother’s student films at Stanford  She engages us thoroughly.

As it is in all good marriages, love trumps the whys. The playwright has created a nice balance between the scintillating minds of the couple and the humor provoked by their differences of opinion. Reading Thomas Malthus inspired Charles to ask why any human survives to live a long life. But Charles never calls us ‘featherless bipeds”, a favorite phrase of Malthus’. Charles never asks ‘why’ about his marriage or his partner.

Love triumphs. As Charles and Emma walk in their garden quoting the final passage of “Origin of Species,” you both see and hear that their ideas have merged in an appreciation of the glories of the world in which we live. They have found the small space in which they can be comfortably joined.

For all the changes in this world since Darwin was born over two hundred years ago, that love between two people has not. In Oslo, Norway, a Darwin descendant and her husband have been married for over fifty years. He the surgeon, and she a cultural anthropologist studying the changes in a human’ beings after body part transplants. They have two offices and the wife is not consigned to correcting comas and semicolons like Emma was. She writes her own distinguished scientific papers. Like the Darwins, this couple lost a child early on. Like the Darwins, this drew them closer in an exuberant embrace of each other and the world about them.

A provocative, engaging production that will leave you asking why when you think about the Higgs Boson at the cyclotron in Cern and also holding more tightly to those you love. While some find the current discussion about religion’s role in society antediluvian, this play offers a civil solution: respect, empathy and gentle debate, something we have long forgotten in this country. It suggests a small space where both sides can productively exist.

This is a triumphant world premier for Lookingglass and Sara Gmitter.