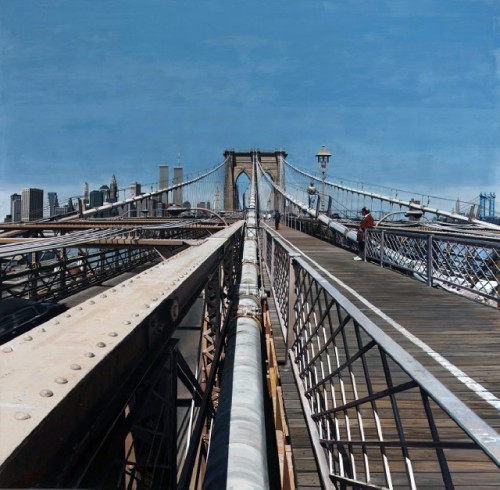 Widely viewed as a pioneering practitioner of photorealism, Richard Estes’ sharply focused technique goes beyond the photographic to create complex constructions of light, reflection, and perspective. The paintings included in this exhibition provide undeniable insight into Estes’ equal interest in cities as well as the Maine coast and the woods on Mount Desert Island in particular. Several of Estes’ rarely seen portraits from such exotic places as Japan and Antarctica are also featured in the exhibition.

Estes’ paintings, amalgamations of the multiple photographs he takes for each composition, are dramatic and complex to the point of ambiguity. He layers and merges multiple viewpoints to create dense and detailed scenes. Though figures are often present in his work they are, like most passersby in public spaces, anonymous and unassuming. His effortless technical finesse captures the intricate geometries of the city, the subtle contours and nuanced tones of natural landscapes, and the shimmering fluidity of water. Estes’ realism is a compelling record of the appearance of urban and natural environments in the late 20th and early 21st century.

Born in 1932 and raised in central Illinois, Estes studied at the School of the Art Institute of Chicago from 1952 to 1956. In 1959, he moved to New York City, where he has lived ever since. For several years, he worked in commercial publishing and advertising as a paste-up, layout, and illustration artist. In the mid-1960s, Estes began to paint from his own photographs, developing paintings that are rooted in Dutch, Venetian, and American representations of urban architecture. In 1978, the Museum of Fine Arts, Boston, organized the first major career survey of his work, which was followed by his 1991 retrospective at the Portland Museum of Art in Maine. Estes is considered the foremost practitioner of the international group of artists known loosely as photorealists, and has been celebrated for more than 45 years as one of the premier painters of American cityscapes.

Jointly organized by the Portland Museum of Art and the Smithsonian American Art Museum, the artworks in Richard Estes’ Realism were selected by Patterson Sims, an independent curator, and Jessica May, Curator of Contemporary and modern Art at the Portland Museum of Art. Virginia Mecklenburg, Chief Curator at the Smithsonian American Art Museum, is coordinating the exhibition in Washington, D.C.

The exhibition is accompanied by a catalogue with essays on Estes by Sims and May. The book also includes a detailed chronology by independent art historian Helen Ferrulli. It is published by the Portland Museum of Art and the Smithsonian American Art Museum, and distributed by Yale University Press.