Warm Welcome from the Opera Community 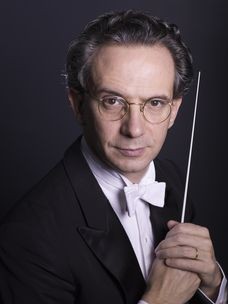 Fabio Luisi conveys many of the same qualities as Maestro James Levine in the performances we have covered for Berkshire Fine Arts this season.

Maestro Fabio Luisi, appointed Principal Guest Conductor at the Metropolitan Opera this week is called “Mo Luisi" by the most exciting tenor around these days, Jonas Kauffman.  This suggests that great Yankee relief pitcher, Mo Rivera, who enters from the bullpen to the tune “Sandman.”

In Hansel and Gretel, brilliantly conducted by Luisi this season, the Sandman walks out of the forest to comfort the lost children.

It remains to be seen whether Luisi is just in for relief, or called up for a role in "the show."  If he succeeds next season in a supporting role will he be offered the Music Director position that the chronically ailing James Levine holds. Will the Met offer him an expanded position as ‘artistic director’ -- a role which does not exist now? Or will Luisi simply move on to his contracted position at the Zurich Opera in 2012? Right now it is all speculation.  We do know that Levine has not been well and help is needed.

Luisi has said he will have input in casting.  Some input from the music side would help.  In the fall, Levine knew a disaster was unfolding before him in Tosca, and averted his gaze.  The orchestra was the only star in the fall production of Tosca.

It was Placido Domingo who insisted that Sondra Radvanovsky, one of the world’s great sopranos, be placed on the Met’s roster.  She was not even scheduled for the few performances of Stiffelo this year, but Domingo brought her in.  The Met needs informed voices that reach the general manager’s ear.  Perhaps Luisi will perform this role with Peter Gelb.

Berkshire Fine Arts has followed Luisi with great interest over the course of this season.

Of his conducting of Elektra we reported

“On December 10, Richard Strauss' Elektra had its season premier at the Metropolitan Opera in New York, Fabio Luisi conducting. The opera as tone poem was conducted with much passion and clarity. The score is unrelenting, powerful, but also vulgar and unembarrassed. That was how it was played. It was a thrilling evening.

“Conducting is no small feat in this Strauss opera composed for an orchestra of 104 instruments: 20 brass, 20 woodwinds and 62 strings, the most instruments deployed in any opera, although Wagner in the "Ring" comes close. Strauss is quite different from Wagner, because he uses the orchestra to break up the whole, splash on color, extend the tessitura and take details to the edge of virtuosity.

“Luisi in any case succeeded holding the opera's disparate parts together. This is not Salome  with its bizarre eroticism driven by a clean sensuality. Elektra is obsessed with vengeance, and it is the opera's star.”

While some members of the Met orchestra did not like Luisi on Elektra, his take had merit.  He emphasized color and detail.  Each instrument was on display when it was in focus.  Levine goes for the drama of the piece.  His Elektra is riveting.  Both conductors' ideas are worth hearing.

One of our readers, Bruce Hodges, commented  “Enjoyed your write-up, especially your praise for Luisi in the pit…the evening is worth it just for Luisi and the powerhouse Met Orchestra in the score.”

Next up Hansel and Gretel.  The composer of Elektra liked this ‘child’s stuff'’ so much that he conducted the world premier.  We went with a young cousin and reported: “She quickly took to assisting Maestro Luisi from her seat, although he didn't need help. He is a conductor who elicits everything that's to be had from the scores he undertakes.  Hansel and Gretel is no exception.”

Just last week we heard a brilliant Tosca under his baton.  “Here, and throughout the score, conductor Fabio Luisi, in for the ailing Levine, showed deference to the singers without compromising the orchestra, no mean feat.”

The unconstrained and so often accurate blogosphere welcomes him.

"Whoo hoo!!! He was the FORCE behind those amazing Toscas last week--in a backstage interview, Kaufmann credited Mo Luisi with forging such great sounds from cast and orchestra."

"He is a singer's conductor and we can look forward to more solid performances under his direction. Bravo!!"

"Say whaaaaaaaa? Luisi is the best thing that could happen in conducting for The Met."

"Bravo, Maestro Luisi! (He was a very singer-sympathetic conductor in the Tosca last week--almost indulgent!)"

"W magazine has described him as your best dressed conductor."

"Re: Luisi, BRAVO! Can't wait for Lulu in two weeks. Finally, the Met does something big-time sensible."

"Wonderful news. Why is it that whatever Luisi conducts - whether Richard Strauss, Johann Strauss, Berlioz, Stravinsky, Brahms, Beethoven, Mozart, Wagner, Moussorgsky - I feel I am hearing the music in a totally new way - so emotional and dramatic and he makes the orchestra sing so."

"Wow! A Principal Guest Conductor who knows the repertory!"

One member of the orchestra sadly noted that the May13 concert at Carnegie would be the orchestra’s first performance in the hall without Levine.  Levine is much beloved by everyone in the opera world.  Well wishers abound.  Perhaps with some solid help at hand in New York, Levine who has two jobs equidistant from Tanglewood will be free to give his all to the performances he chooses and will not exhaust himself and be felled again.

In the meanwhile, everyone is eager to welcome Luisi, and curious to see, not how long he will stay, but what he will undertake while he is with the Met.  His strengths are very much like Levine’s and he will surely be, at the very least, a wonderful ‘relief’ conductor. When and if Levine steps down, or takes a diminished role, let's see if Luisi makes the playoffs.