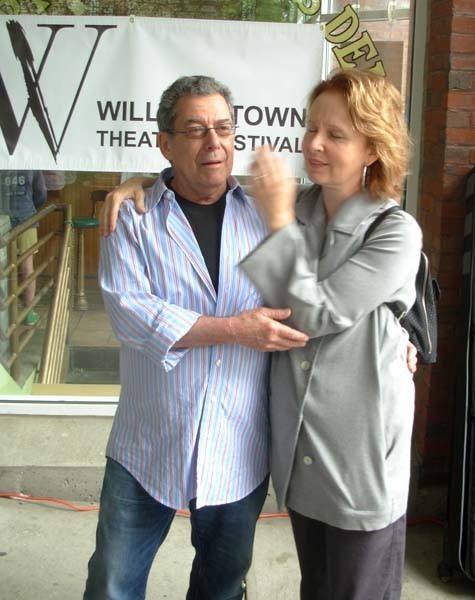 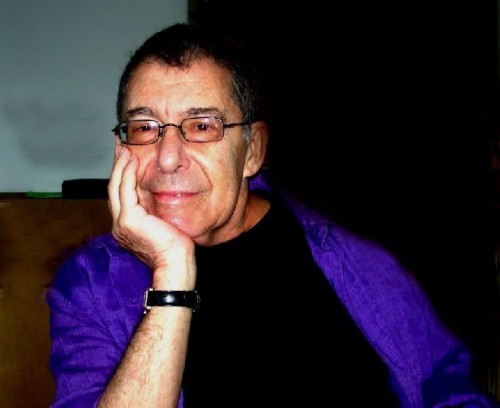 During an interview after his stroke. 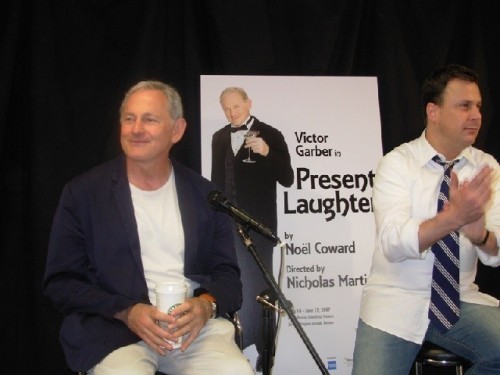 Brooks and Victor during Present Laughter. 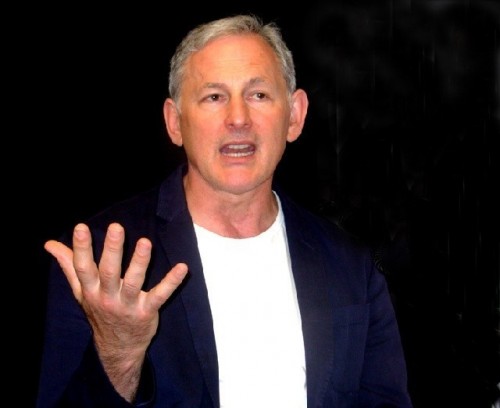 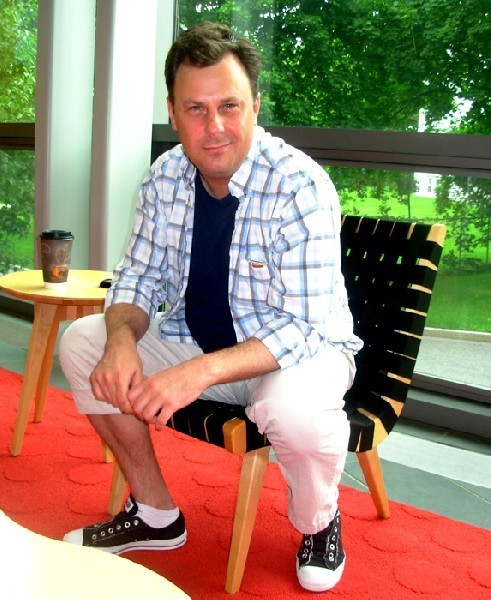 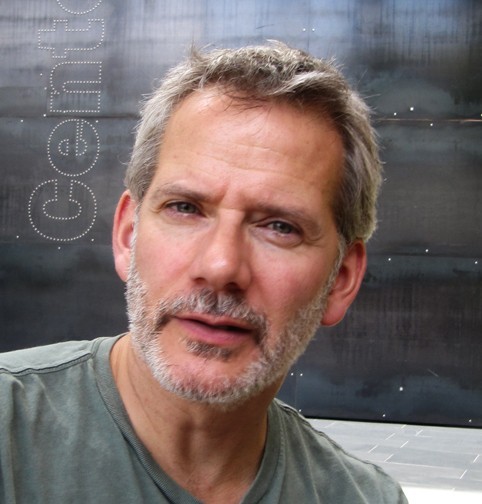 Campbell Scott during Our Town. 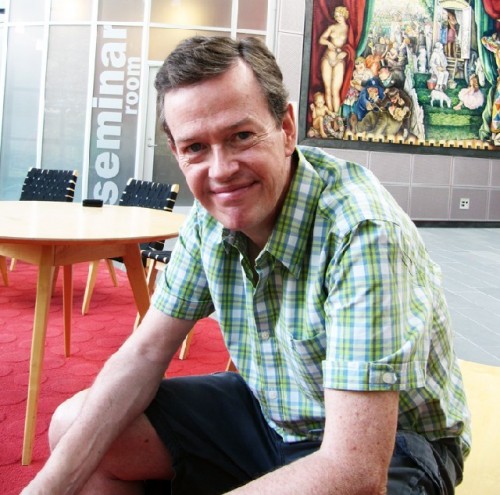 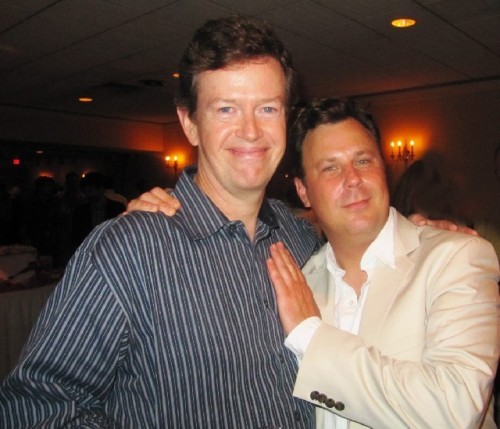 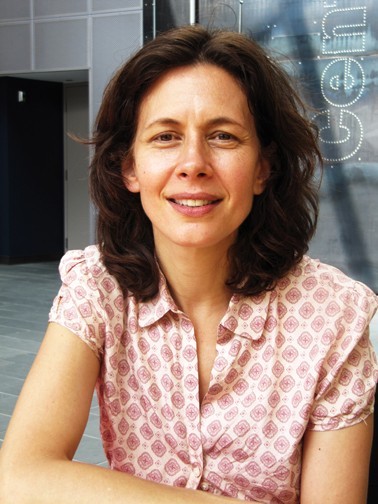 Nicky, as he was known by the many who loved him, including myself, was no stranger to Broadway. In the Berkshires he is remembered for directing 19 productions for the Williamstown Theatre Festival. Prior to Jenny Gersten, who has now moved on in what would be her fourth season, he served as artistic director for three seasons. He came to Williamstown after a similar position at Boston’s Huntington Theatre Company.

Martin was regarded as getting WTF back on track following three years under actor Roger Rees. This summer Rees is cast in a WTF production. The venerable company had been regarded as adrift for some time. Martin provided focus and that momentum largely carried over and was solidified by Jenny Gersten.

My first “interview” with him occurred when we collided at the hotel/ restaurant Gala during a celebration following a WTF opening. He was coming out of the men’s room which I was entering.

Seizing the opportunity I engaged him in a dialogue. Instantly his wit and charm ensnared me. Serendipitously we compared notes on our angioplasties. “Don’t you just love them” he exclaimed with a disarming burst of humor. He described how the procedure had energized him.

After that we met more formally for interviews. Even when he planned to move on he said he would always be available to me. At least on my end I felt many threads that went beyond a professional relationship between a critic and artistic director.

Mostly I regarded him as an accessible and insightful mentor. I discussed with him groping toward understanding the role of the critic. In a benign, affirming and sobering way he said in essence that I would stop wondering about that having written a thousand theatre reviews. At the time it puzzled me. The response seemed cryptic but now it is perfectly clear. I think I have a few hundred to go.

He suffered a stroke but returned for another season. There were many who supported him and made it possible to carry on. When we met that summer I fought back tears while encountering him in a wheel chair. There was a young man who assisted him and I was aware of how his time had become ever more precious.

Martin directed a 2010 daring production of Our Town that drew mixed reviews. It was his final season as artistic director. In 2011, at the invitation of Gersten, he directed She Stoops to Conquer. Last summer’s Pygmalion was widely regarded as a triumph in a transfer from Old Globe in California.

I requested time with him but it didn’t happen. During the opening I greeted him and wished him well. It was the last time we interacted.

Over past seasons I talked not just with him but about him in conversations with actors who worked with him as well as Gersten.

There have been a number of interesting and usually hilarious exchanges with the actor Brooks Ashmanskas. More than a member of the family Brooks was really a surrogate theatrical son. Brooks was at his bedside after the stroke and they regularly celebrated holidays together. They had wonderful synergy in the productions I saw of their work together. He took Brooks to Broadway, as well as another close friend, Victor Garber, in Present Laughter which originated at Huntington Theatre.

Mostly I think that Nicky had a wonderfully rich warmth and sense of humor. While not really a comedian or even a comedic director as such he liked to make people laugh. Or at least smile. Under his direction Brooks was often side-splittingly hilarious. There was enough trust to let him off the leash.

Martin was also subtle, nuanced and poignant which is how he directed Campbell Scott through an inventive and challenging production of Our Town. My conversation with Scott seemed to last forever as he stroked a dog nestled in his lap. I also met with Jessica Hecht then and later. It changed how I thought about that iconic American play. Today I think back on how they explained it to me. It was so rare to have intimate dialogues with Martin a great artist of the theatre.

It was impossible not to love him and I never attempted to hide it. He would return my gaze with knowing and gentle understanding.

But it was that way with everyone who knew and interacted with him. It was wonderful to feel his affection with Kate Burton when he directed her and Burton’s son in The Corn Is Green at the Huntington and WTF. Dylan Baker was in that production and I later got to talk with him in depth.

Surely Nicky was key in making these great artists open and available. I’m sure there was a conversation along the lines of he’s ok, talk to him.

Last summer I really wanted to know his thoughts about Shaw, Pygmalion and that much discussed final scene.

Looking back his stamina may well have been fading. It’s astonishing that he continued to be so productive. The family around him became ever more protective of his time and energy.

Clearly it was his greatest desire and commitment to remain active and creative.

I will cherish his wonderful Pygmalion as the last great gift to his Berkshire audience.