Free Event on Harvard Campus May 17 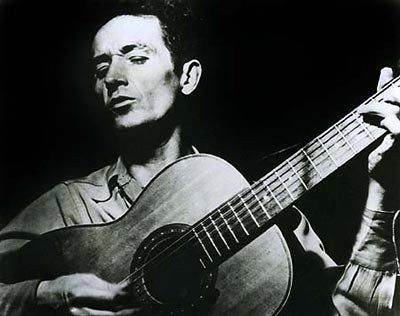 The Simulcast will be preceded by a 6:30pm live performance with Sara Lee Guthrie, Woody Guthrie’s granddaughter, programmed by Harvard Square’s Club Passim.  The live simulcast from the Loeb Drama Center begins at 7:30pm.  After the show, the performers will join the simulcast audience for a celebration of Woody Guthrie’sCentennial with a birthday cake and a hootenanny. Simulcast audience members are encouraged to bring their own instruments and join the party. A large tent will be erected at the Plaza in case of rain; a concessions stand and a cash bar will also be open during the performance.

The event is free and open to the public but tickets will be required. They can be obtained from the Harvard Box Office beginning May 3. There will be a limit of 4 tickets per person, pending availability. Tickets obtained by phone and on-line will incur a processing fee. For more info visit the Harvard box office website: https://www.boxoffice.harvard.edu/Online/

One of the most influential song writers and balladeers of the 20th century, Woody Guthrie is a musical hero of legendary proportions who transformed folk music into a vehicle for social protest and captured the adversity and hardship of a generation during the Great Depression. His music and activism paved the way for many great American music makers including Bob Dylan, Bruce Springsteen, Johnny Cash and many more.

Woody Sez brings the giant to life in a joyous, toe-tapping, and moving theatrical portrait that uses Woody's words and songs, performed by the company of four singers and instrumentalists who play over twenty instruments, transporting the audience through Guthrie’s fascinating, beautiful, and sometimes tragic life. With more than 25 classic Woody tunes including This Land is Your Land and Bound for Glory, Woody Sez captures the heart and spirit of Woody Guthrie and the stories of America.

The American Repertory Theater (A.R.T.) is one of the country’s most celebrated theaters and the winner of numerous awards, including the Tony Award, the Pulitzer Prize and Elliot Norton and I.R.N.E. Awards. In May of 2003 it wasnamed one of the top three regional theaters in the country by Time magazine. The A.R.T. was founded by Robert Brustein in 1980, who served as Artistic Director until 2002, when he was succeeded by Robert Woodruff. In 2008, Diane Paulus became the A.R.T.’s Artistic Director. During its 32-year history, the A.R.T. has welcomed many major American and international theater artists, presenting a diverse repertoire that includes premieres of American plays, bold reinterpretations of classical texts and provocative new music theater productions. The A.R.T. has performed throughout the U.S. and worldwide in 21 cities in 16 countries on four continents.  Since becoming Artistic Director, Diane Paulus has programmed innovative work that has enhanced theA.R.T.’s core mission to expand the boundaries of theater. Productions such as Sleep No More, The Donkey Show, Gatz, Porgy and Bess, Prometheus Bound, and Death and the Powers: The Robots’ Opera have immersed audiences in original theatrical experiences. The A.R.T.’s club theater, OBERON, which Paulus calls a "second stage for the 21st century," has become an incubator for local artists and has also attracted national attention for its groundbreaking model for programming. Through all of its work, the A.R.T. is committed to building a community of artists, technicians, educators, staff and audience, all of who are integral to the A.R.T.’s mission.

The Loeb Drama Center, located at 64 Brattle Street, Harvard Square, Cambridge, is accessible to persons with special needs and to those requiring wheelchair seating or first-floor restrooms. Deaf and hard-of-hearing patrons can also reach the theater by calling the toll-free N.E. Telephone Relay Center at 1-800-439-2370.  For further information call 617-547-8300 or visit americanrepertorytheater.org