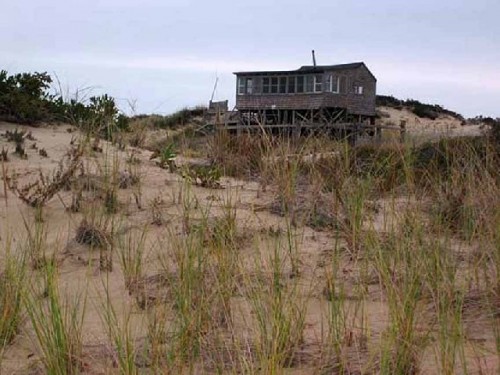 A shack in the dunes of Provincetown. 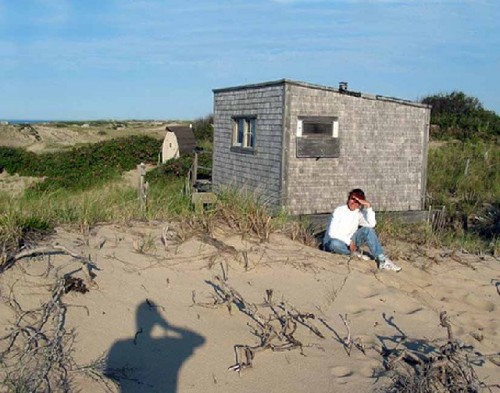 Dan’s shadow photographing Tabitha in front of their shack. 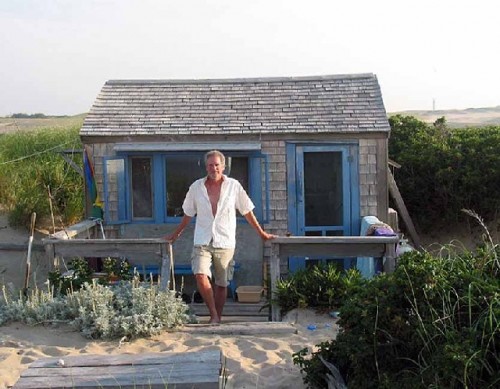 Dan in the dunes. 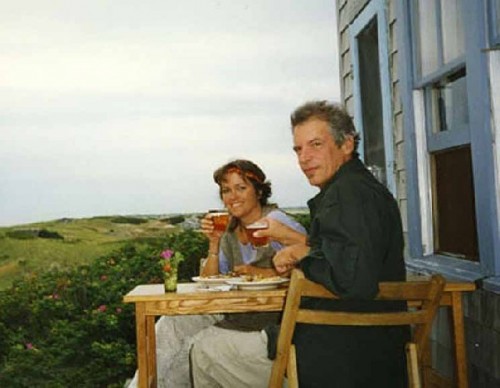 Dinner on the deck. 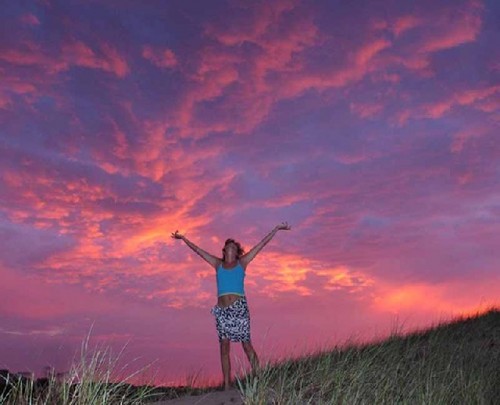 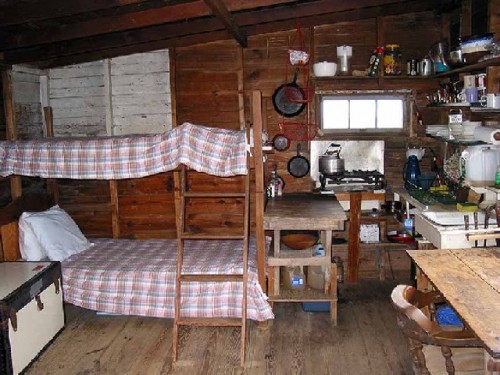 Simple furnishing for a week with nature. 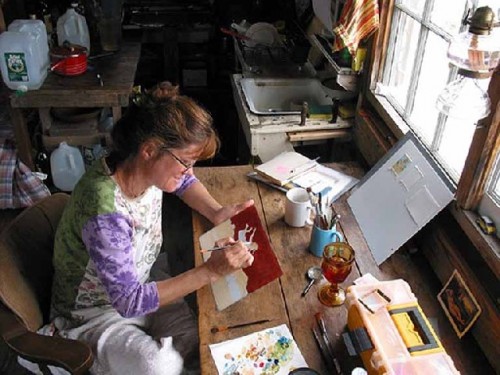 At work creating a painting. 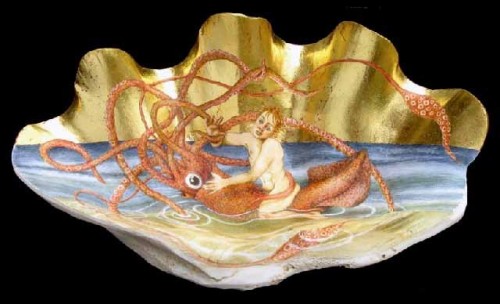 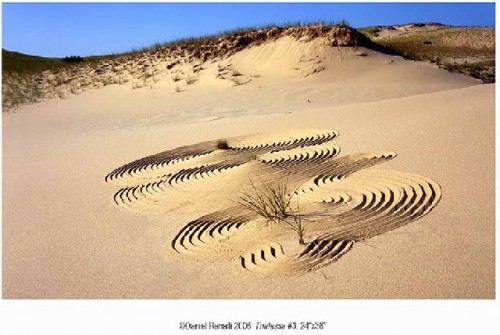 Ranalli creates and photographs raked patterns in the dunes.

For the past several years the community of people using the primitive shacks in the dunes in Provincetown have felt under fire from the Cape Cod National Seashore.  Nestled in the sand dunes in the Peaked Hill Bars area, the eighteen or nineteen remaining dune shacks are a living legacy of Provincetown's artistic, literary and cultural heritage.  Eugene O'Neil, John Dos Passos, Edmund Wilson, Norman Mailer, Mark Rothko, Phil Malicoat, Hazel Hawthorne Werner and Jack Kerouac all spent time in the dune shacks.

In May of this year, after commissioning a study by the social anthropologist, Robert Wolfe to investigate whether or not the shacks constituted a "traditional cultural property" and a true community of users, the government rejected his findings that indeed they were and simply decided that they were not.  This decision makes it easier for the National Seashore to burn and bulldoze most of the remaining shacks Â– which many people feel they have wanted to do since the Park was formed in 1961.

In 1989 the shacks were allowed to be included in the national register of historic places, but they are not yet formally listed.  If the Park had accepted the Wolfe study findings that they were traditional cultural property, that would have given them considerably more protection under federal law.

So why should anyone care about them?  Largely because a significant number of artists and writers Â– as well as many other people who simply wish to live close to nature for a week or two in the dunes of the Outer Cape have found them immensely important.

Two or three nonprofit organizations have made an effort to distribute the use of the shacks to anyone interested.  Peaked Hill Trust maintains five of them, and it allocates one-week stays on a lottery basis to its membership (open to all).  It also provides 4 or 5 two-week stays to writers and artists who are chosen through an application process.  In all cases users pay a fee of a couple of hundred dollars for the right to stay in a very small shack with no electricity and no plumbing.  The Provincetown Compact, also provides residencies in its somewhat larger "C-Scape" shack- both for artists and community people..

Over the past 10 years my wife, the painter Tabitha Vevers and I, have managed to spend approximately 12 weeks out there in five or six different stays.  We have come up in the lottery several times and have each managed one or two artist residencies as well.   Our first stay was in July of 1997, when after being married in Provincetown, a few days later we took the 20-minute ride out to the Margo-Gelb Dune Shack in a four-wheel drive pick-up to spend our honeymoon Â– in Provincetown!  We have been captivated ever since.  Although there are a number of more upscale shacks that are still privately owned Â– some with gasoline generators or solar panels to bring in electricity - I will be describing here only those available to the public in some fashion.

To say the shacks are basic is an understatement.  Originally built of washed ashore lumber by fishermen and other privacy seekers in the 1920s, they quickly became a favorite shelter option of the artists, writers, leftists and Bohemians who began spending summers in P'Town over the next few decades.  They are not luxury accommodations.  We have twice stayed in one that is no more than 9 x12 feet, and they are all very small.  Their walls are semi-permeable membranes Â– admitting bugs, mice and occasionally larger critters as well.  There is a camp-style two-burner propane stove and a small propane fired refrigerator that without careful attention to its quirks, or with a serious heat wave, can turn your provisions into compost very quickly.  There are also kerosene lamps, but we tended to go to bed and rise in synch with the long days of summer  (watches were outlawed immediately upon arrival).

Water is hand-carried after being drawn up, also by hand, from the wells usually less than a hundred yards away.  There are composting toilets that are not at all unpleasant if they are maintained.  Furniture and dishes are Salvation Army seconds and bedding is austere. But oh the views!  Most shacks are perched on a dune with the open Atlantic stretching out infinitely in front of you, and a second sea of low of dune grass shimmering with the breezes at your doorstep and lots of birds, seals and coyotes to keep you company Â– along with an occasional pod of whales spouting on the horizon line.  For me, the stays have been totally magical Â– infusing my work as an artist with an appreciation of the area's landscape, flora, fauna and ecology that I can't imagine ever acquiring any other way.

So why does our National Park Service want to eliminate the shacks?  The truth is we don't really know if they do, although the history of relations with the National Park and the shack owners is checkered Â– my wife's parents had their shack burned down by a Park Ranger over thirty years ago as a "hazard" while they were away in the off-season.    Unfortunately many of the "traditional uses" of the land, which were to be maintained, have seemed to wither away.  Tiny deer paths I have walked for years to get to quiet spots on the dunes on the bay side have been covered aggressively with brush and No Parking signs erected by the road to eliminate their use  (it never works Â– people just create new paths).  The rangers also seem to delight in driving the beaches in their pickups and all terrain vehicles looking for illegal bare breasts and free-range canine pets.  Those issues aside, we are all immensely grateful of course that the Cape Cod National Seashore was established almost half a century ago Â– without which we would be looking at a built environment much like the celebration of conspicuous consumption of Malibu, the Hamptons and Nantucket here on the Outer Cape as well.  There are very few places on the northeast coast where one can walk for miles along the coast and not see any houses, and for that we are truly fortunate.

At this point we don't really know what will happen to the shacks.  Many of us cannot really imagine life without them, they are such an important part of our lives.  In the six or seven visits I have made to them it is clear to me that an important aspect of my consciousness as an artist has been formed there.  I quote from my journal:

Last night we walked down to the beach for a swim before sunset.  The sky was peach and orange and blue Â– one of the most luminous I can recall.  A quick dip in the cold water and we emerged covered with tiny flecks of sea lettuce.  I'm sitting today on a crunchy carpet of pale green lichens mixed with the dark red bearberry.  I have seen two rabbits, some dusty toads, a few doves, many finches and the Harrier hawk that floats above the dune looking for a mice meal.  I read this week that a bird can sleep with one eye open and one side of its brain awake while the other eye and the opposite side of the brain sleeps thereby avoiding predators.

In 2003 I tentatively began a series of Raked Zen Gardens in the sand dunes.  Within a couple of more years, and with two or three more visits, that series became the focus of my work.  Walking through the dunes  - at times in heat that exceeded 95 degrees Â– especially in the big parabolic bowls of hot sand that I would work in.  I learned how to tread lightly over the dunes and to make small marks in the sand that would reinvigorate that landscape and fade away in a matter of days from the wind.  Again, from my journal:

Hardly 9 AM I imagine, and the heat is already wilting. Earlier this morning I walked out to the large open spot Tabitha had found last week.  The heat was too much Â– I couldn't really think straight and raking tired me quickly.  I erased what I had done and came back to the shack for a rest.  Last night we ate grilled vegetables, jasmine rice and the small bluefish I caught yesterday morning.  We always eat well out here Â– although keeping the wine cold is impossible!

As for me,  I don't know if I will get out the dune shacks again.  I have a week I couldn't use this summer that I hope to redeem next year.  I don't expect to be doing the raked sand pieces, but I hope my eyes and heart will be open to what the dunes will reveal.  What is really more important is maintaining a tradition with the shacks Â– none of us can really "own" this kind of environment.  But we are all responsible for taking care of it for the next generation.  I can't imagine what it would be like not to have the shacks available for people to use.  Everyone who goes comes back a more vigorous guardian of Cape Cod's fragile ecology.

Daniel Ranalli is an artist and itinerant writer who has spent long seasons on the Outer Cape since 1981.