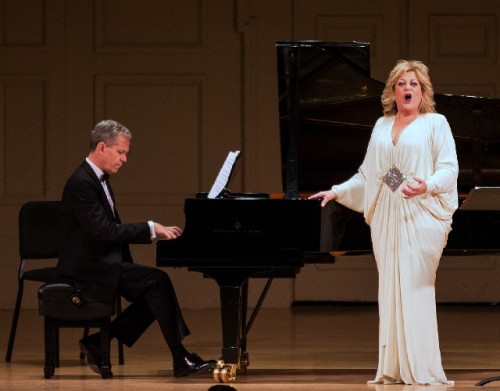 On stage at Symphony Hall.

When Deborah Voigt walked onto the Symphony Hall stage to immense applause, her arms raised to show off her (relatively) svelte figure, you realized you were in for a pleasant afternoon. There is no opera singer more likable than Voigt; Renee Fleming, “the people’s diva,” is perhaps her only competition. But for the sake of good feelings, let’s just say that the competition between them is a draw. How nice it is to have two immensely likable American sopranos regularly appearing before the public. And beside which, from the evidence of the Met’s high-definition TV transmission intermission features, they seem to be friends. The days of another generation’s warring divas are over.

Voigt has off-stage drama on her side, however, that the golden-girl Fleming lacks - the weight and dependency issues she has been so frank about. In a way she couldn’t not address them after she was fired from a high-concept Covent Garden production because she was too fat to fit in the little black dress the director intended his diva to wear. Indeed, her battle with weight, her momentary triumphs, her relapses, have been documented over the years by a sympathetic Anthony Tommasini in the cultural pages of the New York Times, the closest the paper of record has come to People Magazine-style celebrity gossip.

Now in her early 50s, getting ready to retire from full-time opera singing, Voigt was looking good, the white, spa-like gown with the spangly clasp she wore after intermission was more flattering than the dark blue dress with low–cut lace bodice of the concert’s first half.

It’s always a challenge for real opera stars to present a song recital accompanied only by piano. Their dramatic voices are often too big for the intimacy of the song, which tends to tell a smaller, more internal drama. Voigt, who has an huge, dramatic voice, did her best to leave divadom behind, showing that she was just folks. She got right down to business, singing a song by Amy Beach to a text by Robert Browning, “The year’s at the spring,” adding at the conclusion, “I sang that because I, like you I’m sure, am sick to death of winter.” If she sang the song brusquely, she won the audience over with her conspirational aside. She also mentioned that she sang Beach because she was a woman, and it’s nice to sing a song by a woman once in a while. Too bad she didn’t mention that Beach spent much of her career in Boston, playing the piano on the very stage where she was standing at that moment. Maybe she didn’t know.

And so it went. Before she sang two songs by Tchaikovsky, she confided that she hadn’t sung them since a Tchaikovsky competition (which she won) decades ago, but “we get better with age.” I don’t know how they sounded when she sang them years ago in Moscow, but they were two of her better, more soulful, efforts at Symphony Hall – one wishes she had sung more Tchaikovsky – and her Russian enunciation was excellent.

There was a sense of this being the start of a long process of saying farewell – not as long, pray god, as Cher’s farewell concerts – but you felt that a career was winding down; although Voigt still has some big roles by Wagner, Strauss and Puccini on her docket – so who knows. At the end of her Strauss set – Voigt was, is, a great Strauss singer – she sang “Zueignung” (Dedication), one of his most ravishingly beautiful songs, and no one wrote more ravishingly beautiful songs for the soprano voice than Strauss. Again Voigt confided that for years she never programmed it, because everyone else did, but, now, well, now, she can sing what she wants. And, BTW, she practically blew the roof off Symphony Hall with the final “Habe Dank!” (Thank you). Thank you, indeed, Ms. Voigt, for not scaling down your voice for that moment.

Elsewhere the voice showed its problems. Although her high notes have always gleamed, there is a bleating quality to the middle register that has gotten more noticeable, and at least during the warm-up Beach set, the voice wobbled.

The big problem with the afternoon was the program. Probably intending to show herself as the unpretentious Midwest girl she prides herself in being, Voigt programmed American art songs after intermission. Now there are some good American art songs, but for the most part I find them lacking in everything that makes a song memorable, like melody, rhythm and feeling. Good American songs came out of the Brill Building, out of the coffee houses of Greenwich Village, North Beach and Santa Monica Boulevard, and out of the jazz clubs of New Orleans, Chicago and Kansas City, but they’re not called “art” songs. Voigt sang none of that great literature – although, frankly, I can’t see her singing Joni Mitchell - preferring the wan, quasi-melodic songs of Ben Moore (who he?), and the drivel of Leonard Bernstein. (Is there any “anti-war” song so trite as his “So pretty”?)

A brief set of three songs by William Bolcom suggested that a program of American “art” songs could work. Bolcom’s compositions had variety and his lyrics wit. (One of the songs was about the death of a drag queen – at least I think it was.) You heard in his works the influences of Kurt Weill, not Edward MacDowell.

The two encores visited the sources Voigt had overlooked earlier. Irving Berlin’s “I Love a Piano” gave her the opportunity to camp it up over Zeger’s Steinway. (Zeger was the dutiful accompanist – too bad he didn’t get to play a little solo something or other.) And Jerome Kern’s “Can’t Help Lovin’ That Man of Mine” was Voigt’s best moment in the entire second half of the program. In 2011, Voigt divided audience opinion with her depiction of Annie Oakley in Berlin’s “Annie Get Your Gun” at Glimmerglass. Maybe she’s working on “Show Boat.” From the evidence of that Kern song, it could be a triumph.