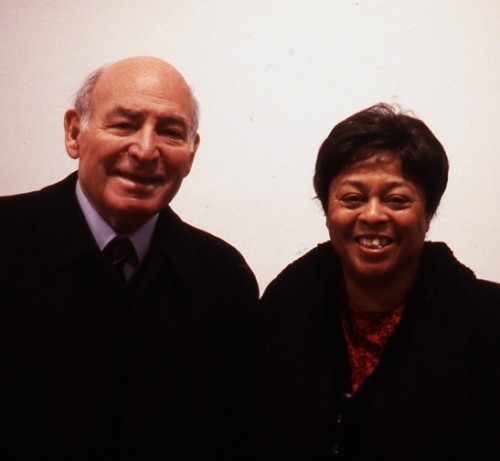 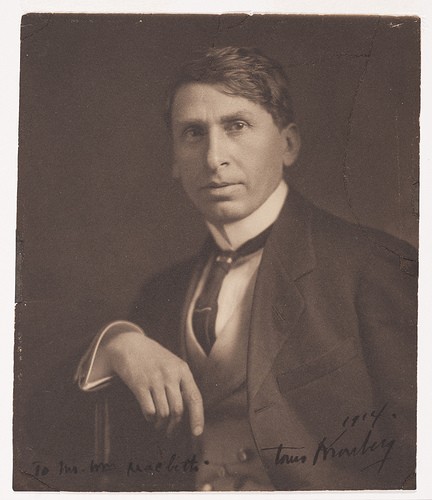 Wein was related to the painter Louis Kronberg.

Kronberg took Wein to the Louvre when he visited Paris in 1949. 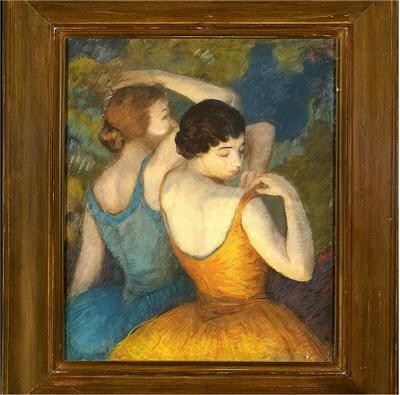 Kronberg is known for paintings of the ballet. 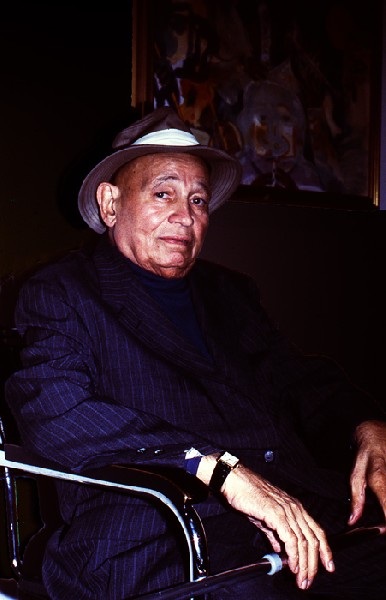 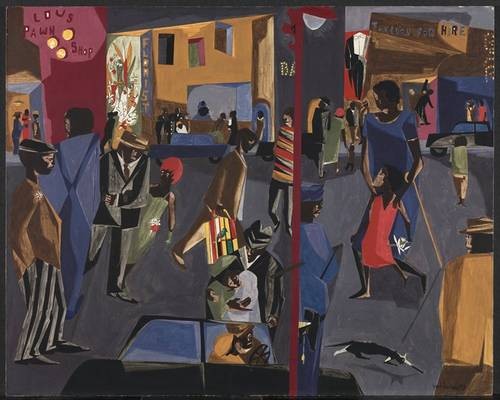 A work by Jacob Lawrence sold to the Cleveland Museum. 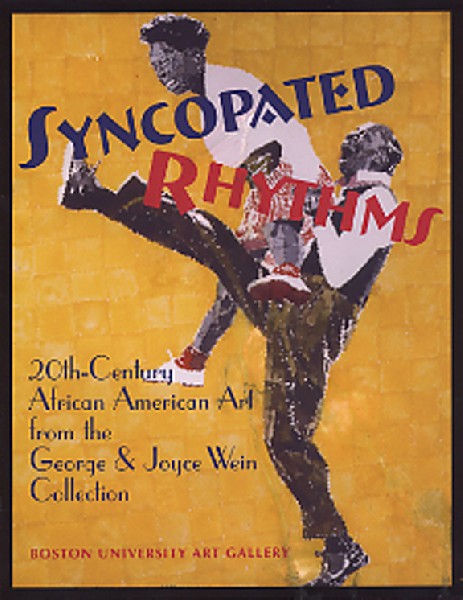 Poster/Catalogue Cover for George and Joyce Wein Collection Exhibit at Boston University in 2005 with watercolor image Savoy by Richard Yarde, 1991 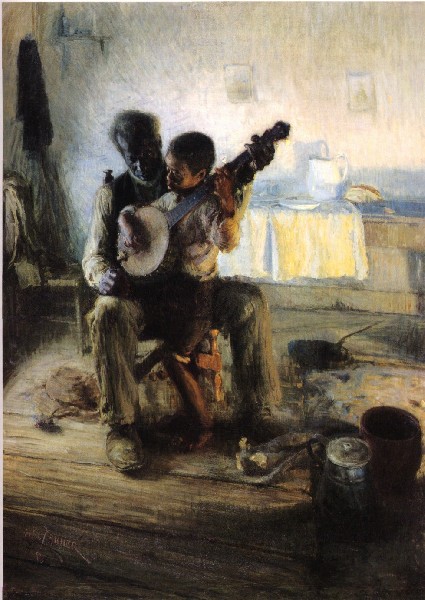 Charles Giuliano How did you become involved in collecting art?

George Wein  That was always an aspiration. We had a relative who was an artist. A semi known painter he was my grandmother’s first cousin. He had a studio in Paris and painted the ballet like Degas.

(Louis Kronberg (1872–1965) was an American figure painter. He was born in Boston, studied at the Boston Museum School, at the Art Students' League, New York, and at the Académie Julian under Laurens and Constant. Establishing himself in Boston, he was appointed instructor in the portrait class of the Copley Society, Boston. Among his best-known works are "Behind the Footlights" (Pennsylvania Academy, Philadelphia) and "The Pink Sash" (Metropolitan Museum, New York). Kronberg was vastly supported by Boston's great art matron Isabella Stewart Gardner, and hence his work is represented in the Gardner collection, in Boston, as well as in the museums of Boston and Indianapolis.)

He never became big but he was a member of the art world. I went to Paris in 1949 during my senior year in college. I visited Louis in his studio. It was very romantic in Montparnasse. I went to the Louvre with him and he told me about the different painters. We took a trip to Antwerp where we went to the museum and saw works by Rubens and VanDyck.

The next thing I know I was taking courses in college on the aesthetics and theory of art. I went to museums everywhere I went. I was very involved as a student of art. With a little money I came to realize I could buy a painting for a few thousand dollars. Next thing I know I was collecting.

CG Was it because of your relationship with Joyce that you decided to focus on African American art?

GW I bought a few paintings by artists who were not African American. Then I found that I couldn’t afford them. The prices were going up so fast. I felt that because of my association with musicians and people I met along the way. I had Romare Bearden over to my house for dinner one night because of Al Murray. Since then I collected African American art and I read all the books on African American art. Very few people were collecting the work at that time. It was just a small group. It was about the same time that (Bill) Cosby started to collect.

CG You showed the collection at Boston University.

GW On Commonwealth Avenue in the art studio building they have an art gallery. We showed 150 odd paintings up there.

CG How extensive is your collection?

GW At one time we had between 150 and 200 works. I sold a lot. I sold seven paintings to the (Boston) Museum of Fine Arts.  I sold a painting to the Cleveland Museum. I have given paintings away. I still have a lot of paintings but I’m not a collector anymore.

CG I was under the impression that you were planning to donate works to the Museum of Fine Arts.

GW They may be trying to create that feeling. I said, if you want African American artists, you have to pay for them. You’re not getting them for nothing.

CG Why did you say that?

GW If you pay for something you treat it better than if you get it for nothing.  One I needed the money and two I did not want to give away African American art.  I felt that the museum would have more respect for them if they paid for them.

CG It’s significant that the MFA is even interested in acquiring works by African American artists. During the 1940s and 1950s there was the movement of the Boston Expressionists including Jewish artists, Karl Zerbe, Jack Levine and Hyman Bloom.

CG The museum showed little interest in collecting their work.

GW They got very short shrift. Jack Levine got a little acceptance.

CG Did you know Jack?

GW I met him but I didn’t know him. We both got an award the same night from the Jewish Advocate.

CG The museum never showed interest in minority art so this is a change for them. Isn’t it significant that they want to include African American artists in the Art of the Americas Wing.

GW They paid me a lot of money for seven works. So that may be some interest.

CG Would you care to disclose what they paid?

GW Ask them. They’ll tell you.

CG As a matter of policy museums do not disclose what they pay for works of art.

GW I think they have to. It’s a matter of public knowledge.

CG No they don’t disclose.

GW I don’t know how they get away with that. Perhaps they have a total figure for acquisitions for the year. Then break down the figures.

CG No, they don’t do that. Who were the artist whom you sold to them?

GW I was concerned with the historic artists of the WPA period like Romare Bearden (September 2, 1911 – March 12, 1988) and Norman Lewis (July 23 1909 – August 27 1979) then from a little earlier I had Tanner (Henry Ossawa Tanner , June 21, 1859 – May 25, 1937). From the earlier period I had a Joshua Johnson. (The artist c.1763-c.1824 was an American biracial painter from the Baltimore area. Johnson, often viewed as the first person of color to make a living as a painter in the United States, is known for his  paintings of prominent Maryland residents.) He was one of the earliest known African American portrait painters. His works are like those in the Karolik Collection of the MFA. I collected the landscape artist Duncanson. (Robert Scott Duncanson 1821 – December 21, 1872 was born in Seneca County, New York.  His father was a Canadian of Scottish descent and his mother was an African American, thus making him “a freeborn person of color.”)

I was getting into the history of African American art.

GW He has the greatest Tanner ever painted.

CG From what I understand he has been reluctant to loan the painting to exhibitions.

GW If he has enough money he’ll start his own museum. I think so. I don’t think he’ll give all those paintings away. He has a huge collection. I had a few things that he didn’t have. I’ve sold quite a few paintings. I’ve sold my two best Beardens. I sold to the Cleveland Museum one by the artist, who did the Immigration Series.

GW Yes, Jacob Lawrence. I sold a fantastic Lawrence to the Cleveland Museum for huge money. It’s nice to get the money and it’s nice to sell them now. It helps in my old age.

CG When you were actively collecting were you and Joyce both involved in the process?

GW Basically I was the energy behind the collecting but it was because of her that I was doing the collecting. Because that was the world I was in.

CG Were the prices affordable then?

GW Yes, it was very different. If you buy a painting for $10,000 and sell it for $1 million you know that prices were different.

CG It proved to be a good investment.

GW Yeah, but you never know that. If you buy paintings for investment, unless you’re a big time guy, but the average person, if your buy it for investment, you’re crazy. You have to buy because you have knowledge about it and are aware of what it is. You want it and you can afford it, then you buy it. If it becomes more valuable then you’re lucky.

CG Looking back at your legacy in jazz you dealt with many of the giants like Miles. Can you tell us what that was like?

GW Oh my God Charlie, you ask me a lot of things. I’m going to have to take a break soon. I’m getting tired.

CG Ok we can shut it down.

GW There’s a whole thing about dealing with people like Miles (Davis), (Thelonius) Monk and  (Charles) Mingus, Max (Roach) and all the M’s. Somehow or other to make the relationship work you had to gain their trust. Each one I gained their trust in a different way.

With Miles once I stopped the payment on his check when he didn’t play the gig. He said “Why did you stop the payment? I said “Why didn’t you play the gig?” He said “Fuck you” and I never had a problem with him after that. If I had let him get away with the check he would have had no respect for me.

So with each on there was something involved with gaining their trust. They understood that my word was always good with them. If I said I was going to pay them I paid them.

CG At the festivals you often enjoyed creating jam sessions and bringing artists out to play with each other. That didn’t always work. I recall an event you did at the Boston Garden with an evening of all stars. You had Dave Brubeck on stage and then brought out Mingus to play with him. Ever playful Brubeck would lay down a riff and then Mingus would cut it to shreds. It was like the scene in Amadeus with Mozart improvising on Salieri. It was the funniest set I heard in my life.

GW That was a benefit we did for the Newport Festival after the riot in 1971. Everyone agreed to play including Aretha Franklin. And we lost money on the event. Nobody believed that so many artists were going to come.

CG Aretha wore an odd outfit like a fluffy snow suit. She looked like a polar bear.

GW I can’t recall all the artists but I remember calling Roberta Flack, Aretha. She said “If you call me Aretha one more time I’m going to smash you in the face.” I was running round like a chicken with the head cut off.

CG Thanks George. We hope to see you this summer at Newport.