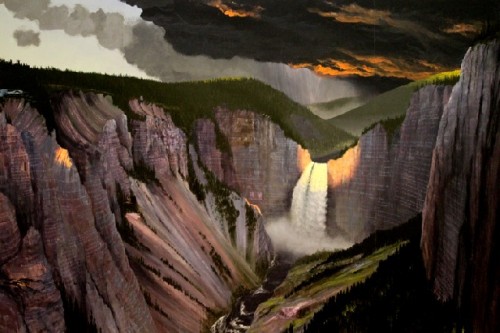 A view of Yellowstone by Stephen Hannock. David Lachman photos. 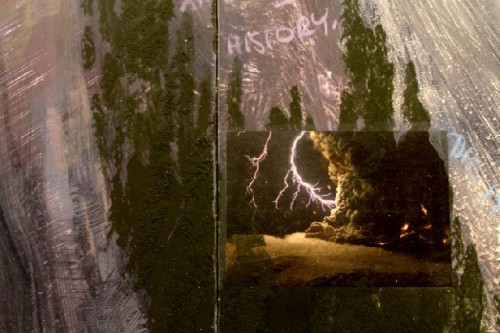 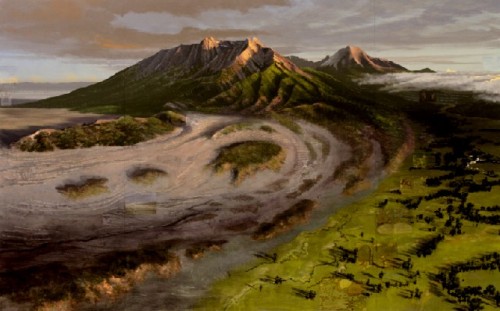 Hannockâ€™s Mt. Blanca with Ute Creek was on view for just one night at Mass MoCA. 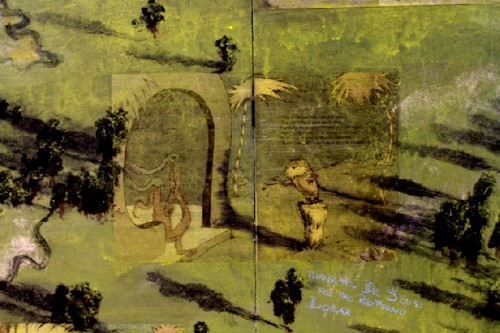 This detail reveals how he uses text and collage in the work. 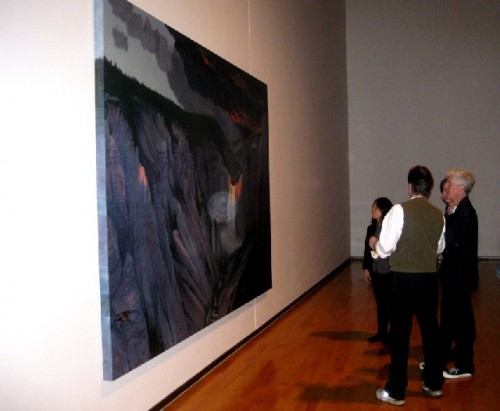 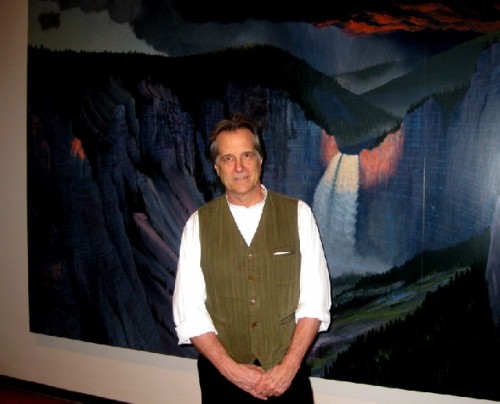 hannock pulled an all nighter to finish the paintings. 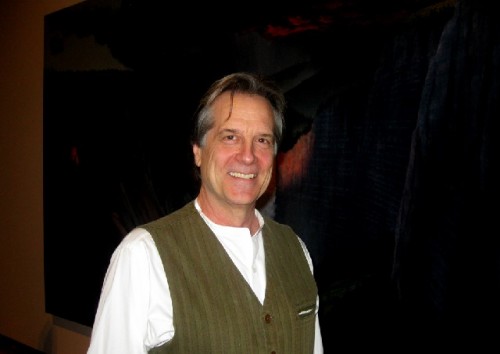 The pleasure of finishing a major project.

The norm at the Massachusetts Museum of Contemporary Art (Mass MoCA) is for works to be on view for an extended period of time. Usually for at least a year or decades in the case of Sol LeWitt.

For North Adams based landscape painter, Stephen Hannock, he now enters the record book for the briefest ever Mass MoCA exhibition. Two new works, completed just hours before the opening, are on their way out of town.

Last night, in a most unusual event, the opening was also the closing.

We talked with Richard Criddle, the chief preparator for the museum, who stated that he was initially surprised when informed of the plan for a one night show. It occurred because there was a narrow window between exhibitions. A show had just come down and today Criddle and his crew start to install work by Petah Coyne which opens on May 29.

“It all worked out” Criddle said with a tone that conveys that nothing at Mass MoCA at this point surprises him.

“It was great of Joe (Thompson director of Mass MoCA) to let this happen,” Hannock said taking a break from greeting a steady flow of guests for the private event. “It says a lot about him  and the museum.”

Hannock is a world reknowed artist who keeps a studio in New York but prefers to live in the Berkshires. His mother, who attends his local openings, is a resident of Williamstown. He also shows there at Harrison Gallery.

A while back when Stephen was working on a major commission from his friend, the musician Sting, I spent a lot of time with him in the studio. We reported on the progress of the Newcastle painting, a conceptual portrait of Sting’s home town, for Berkshire Fine Arts.

Prior to last night I had not seen the two new works. Like the other guests it was great to see these powerful and insightful paintings.

“I knew you would be asking me questions about the paintings” Hannock commented. “I imagine you scribbling notes or working with a laptop. So I saved you some trouble by writing notes.”

What appears below is the e mail he sent. We vowed to catch up and continue the dialogue after these new works are installed. He conveyed that he was fried having pulled an all nighter to finish the works. Knowing Stephen he will do some touching up before they are unveiled.


“The Yellowstone Falls piece, which has been underway for the better part of a year, is my third treatment of this composition.  (the first, 6', is at the Smithsonian American Art Museum..... and the second, 9', is in the Lauder's collection).  Sue Simpson, one of my dearest friends on the planet, owns a terrific gallery in Cody.  (She is the daughter of the amazing Ann and Senator Alan... and  a protégé of Barbara Novak the super scholar of 19th Century American Art).

”Last summer she called up to say that the Smithsonian just notified the Whitney Gallery of the Buffalo Bill Historical Center that they had to take back the massive Thomas Moran (The Grand Canyon of Yellowstone)  earlier than expected....and did I have anything big that might take its place.

”The Moran was the centerpiece of the grand reopening of the newly renovated Whitney at the BBHC and is really stunning.     But what a stitch.  Not only did I have a big painting underway.... but it was a treatment of my composition of the Yellowstone Falls. (I think my painting is called:  Flooded Cascade,  Yellowstone..... but I'm not sure.  Dave (Lachman) will know.)

“Then... Mt. Blanca with Ute Creek  is a painting that's been underway for a couple of years....for delivery next year.   Longtime collector of mine, Louis Bacon  (who donated the acquisition funds for the Met's Oxbow 1999 as well as the National Gallery's Recent History of Art in Western Massachusetts, Flooded River for Lane Faison 2005) purchased the Trinchera Ranch from the Forbes family in 2008.

”Long-story-short....They learned that the two largest utilities companies in Colorado had proposed to run a massive transmission line right up the stunning and pristine La Veta Pass, which runs right through the ranch..... and the push was on to fast track this.

”With conservation groups scrambling to mount opposition (there is an already developed transmission corridor nearby which could be used for a new line rather than carve up new territory).... it only made sense for me to complete this asap as opposed to next season.

”It's not a documentary film.... but, as you know, these vistas with text are similar to docs in interesting ways.  When I told Louis's director of philanthropic operations that I just might be able get this piece done early it set several things in motion.

“Not the least of which was a positive vote by the acquisitions committee at the Denver Art Museum and an unveiling sponsored by several of the State's conservation groups to draw attention to this issue.

“And in true form.... here we are, seven hours before our little gathering at Mass MoCA and 10 hours before the van leaves for Denver, literally....... and I still haven't finished the painting.

“I thought that it was pretty cool of Joe Thompson (Director of Mass MoCA): The idea of a one-night-show so a few folks could see these pieces before they blew out of town forever (and so we could do some fine tuning)...... is as creative as the work that occupies that museum.”