I Puritani at Boston Lyric Opera 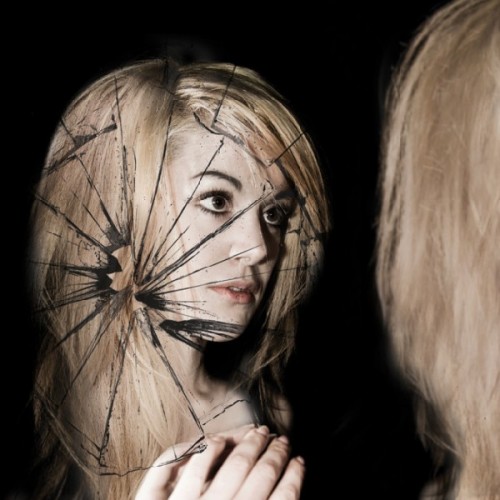 BLO ad for "I Puritani" 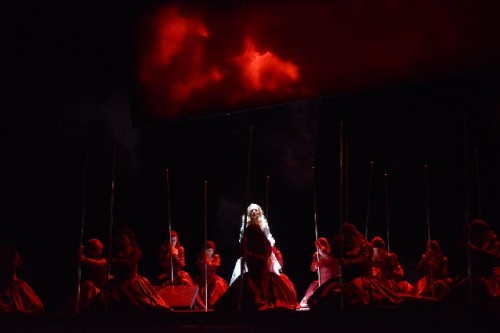 Elvira (Sarah Coburn) with the chorus of Puritan women 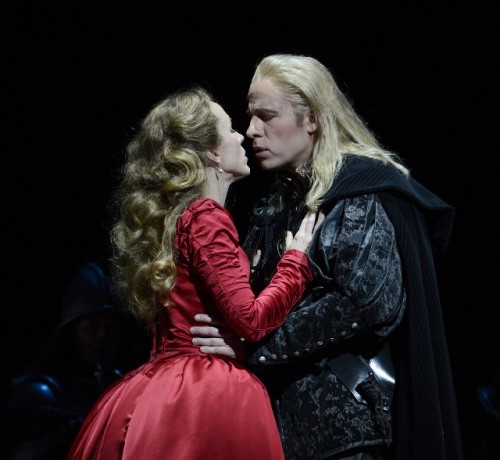 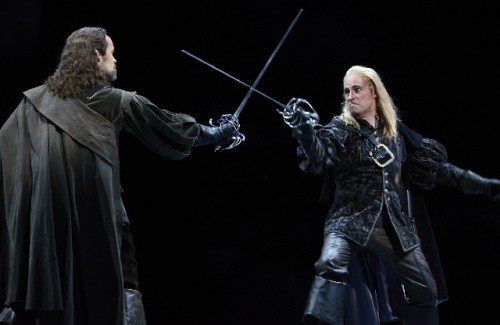 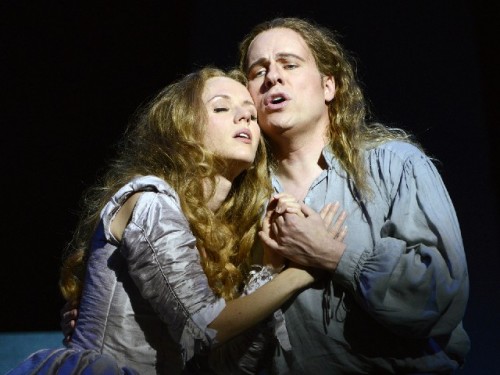 Elvira and Arturo in a moment of passion 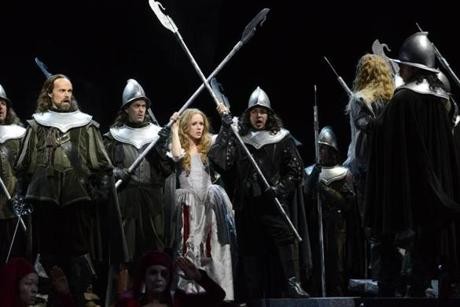 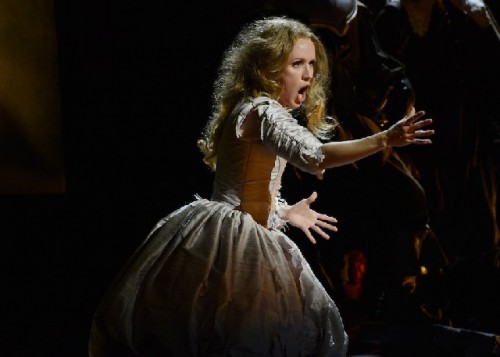 Elvira (Sarah Coburn) in the midst of her mad scene

A lot of people who hate opera point to the often-ridiculous plots upon which they are based, overlooking the rhapsodic music attached to their absurd storylines. Perhaps no opera better illustrates the situation than Vincenzo Bellini’s “I Puritani.”

The story strains all credulity. Elvira, the virginal daughter of a Puritan elder during the English Civil War is in love with Arturo, a supporter of the already decapitated King. (Historically, they have English names, but the opera is in Italian, so they go by their Italian names, which doesn’t help the cause of rationality.) Her father allows them to marry although he has already promised her to Riccardo, a young captain in his army. When he comes to the Puritan encampment to claim his bride, Arturo discovers that the murdered King’s wife, Queen Enrichetta, is in custody awaiting execution, and he saves her by smuggling her out of the camp wearing Elvira’s wedding veil. Thinking that she’s been jilted, Elvira goes bonkers – wouldn’t you? - singing not one, but two mad scenes. Not to worry, it all turns out all right: Arturo returns and explains his three-month absence, the royalists surrender and the magnanimous Oliver Cromwell declares amnesty for former supporters of the King. (There is a twist in this production that might outrage those who prefer their operas to be done according to the text.)

Agreed, not something we would want to see staged as a spoken text.

But - and this is a very big but - Bellini attached some of the most sublime vocal music every written to this creaky scaffold. Those who love the music can ignore the story easily enough, rolling their eyes when its absurdity cannot be avoided. But those who ignore the music and focus on the plot either have no soul or don’t understand that great art transcends rationality.

Opera is almost always steeped in feeling, and no opera is more dependent on its emotional appeal than those written by the early 19th century Romantics. The most forthright in the display of feeling are those written by the Italian bel canto composers, whose works dominated opera stages from Milan to Paris, from London to New York, from Lisbon to St. Petersburg, from about 1813 when Gioacchino Rossini’s “L’Italiana in Algeri” was first performed in Venice until about 1853 when Giuseppe Verdi’s “La Traviata” was first performed, again in Venice. During those 40 years, in addition to Rossini and Verdi, Gaetano Donizetti and Bellini created theatrical masterpieces - comedies and tragedies - that expressed their drama by exploiting music for its inherent emotion.

For many, Bellini, who died at age 33 in 1835, was the greatest of them. Not that he was such a great composer. Even he knew that he failed at creating complex harmonies or even interesting orchestral accompaniments for his singers. But as a melodist, no one in opera, before or after, can compare. And his melodies had one goal – to tear your heart out of your chest and to pull tears out of your eyes. If you don’t cry - if you do not sob - at a performance of one of his three great operas, “Norma,” “La Sonnambula” and “I Puritani,” you are not alive or the performance failed. The task of transforming notes on a page to music that turns you inside out emotionally falls on the singers, primarily the sopranos, who play the principal characters.

I did not cry at the Friday night performance of the Boston Lyric Opera’s “I Puritani.” I doubt if anyone in the audience did. At the end of Elvira’s great mad scene, “O rendetemi la speme; o lasciatemi morir…Qui la voce sua soave mi chiamava,” (Oh! Let me hope again; or let me die…), when the audience should be screaming its lungs out, there was only muffled applause. You could tell that people knew they were supposed to clap at that point but that they didn’t feel like it. They had experienced an intelligent display of singing but it didn’t tug at their hearts.

The BLO’s production had much to recommend it. Under the baton of music director David Angus, the orchestra played with real verve, setting up the pulse that mimics a humaheartbeat, which continues to the end of the work, from the very first notes of the score. The chorus sang with commitment, serving almost like a rhythm section to the vocal soloists.

The production was good to look at, which isn’t as easy as it sounds. The entire opera takes place in a Puritan military camp, in which everyone is wearing dour, gray outfits. Costume designer Gail Astrid Buckley took a real risk dressing the Puritan women in identical dresses of dark burgundy, but it paid off, especially when seen in conjunction with Elvira’s ruby red gown and later her white wedding dress. BLO regular set designer John Conklin turned in one of his better efforts with floating panels bearing images of storm clouds for the outdoor scenes and fragments of classical architecture for the interiors. Lighting designer Paul Hackenmueller create an appropriately gloomy stage picture out of which he picked the principals at their important moments. Stage director Crystal Manich got everyone to move convincingly on the narrow stage, although there was some foolish business with three of the female choristers doing some signing, and there was her innovation at the conclusion of the work, which we’ll come back to. Still, the unfortunate design and directorial touches that have marred so many BLO productions were absent.

The problems lay with the vocal soloists. The singers in the smallest roles were all fine. The two men with low voices were excellent. Paul Whelan as Giorgio, Elvira’s uncle, and Troy Cook as Riccardo, her Puritan betrothed, received the evening’s only heartfelt ovation for their martial Act II duet,  ”Suoni la tromba” (Sound the trumpets).

Cook turned in the best vocal performance of the evening in his first act aria, “Ah! Per sempre io ti perdei, fior d’amore, o mia speranza” (Ah, I have forever lost you, flower of love, O hope of mine), which he sang with the melting tenderness the entire score calls for, but which was otherwise mostly lacking.

As Arturo, John Tessier was a real cipher. What was wrong with Elvira that she loved such a fop over the manly (and vocally resplendent) Riccardo? His tenor was pinched, and he used a strange, unpleasing falsetto voice to hit his high notes. In general, he looked uncomfortable, which dramatically could be explained as his being a Cavalier in a Puritan camp, but seemed to be more existential – he didn’t feel at home on the stage, in this production. Maybe it was opening night jitters. He also proved a half-hearted partner to Coburn’s Elvira. There was a total lack of chemistry between the two lovers. You sensed indifference rather than passion in their interactions. The trouble was immediately evident in his entry aria, “A te, o cara” (To you, beloved), one of the greatest bel canto tenor arias. At the end of it you should have melted in a puddle on the theater floor. But here you heard only a dutiful performance of a professional singer, not the impassioned declaration of love of a lover who has risked his life to come for his inamorata.

Coburn’s Elvira was more interesting and better sung, but still not emotionally involving. She has obviously studied the part well – she is an intelligent singer. And she acted well, ranging from the coltishness of a virgin about to be united with her lover to the confused and frightened madness of a spurned woman. In her mad scene, you could see how she deconstructed the aria into its constituent parts, producing each one according to its formal demands. But you don’t want to have that experience with “Qui la voce sua soave mi chiamava.” You want to be swept up in her madness along with her. You want her to carry you along into her delirium. And as you did earlier with Arturo, you want to be left a puddle on the theater floor. Elvira is a new role for Coburn. This is her try-out of it before she brings it to bigger places – she sings it next in Copenhagen, at the Tivoli Festival. What she has to do is put back together everything she took apart in order to learn the aria properly, and then sing it with unbridled passion. She has to make you believe that she is a woman who has lost her mind over love. (And she needs a more sympathetic partner than Tessier.)

But maybe Elvira is not Coburn’s ideal role. Her voice has a metallic edge, and she had to force her high notes, a couple of times unpleasantly. Coburn made a great impression two seasons ago with the BLO as Rosina in Rossini’s “Il Barbiere di Siviglia.” But that role was written for a mezzo and lies lower in the vocal register, so she had no problem with high notes; and it was a comedy, which brought out her innate comedic gifts. Her best singing of the evening was in “Son vergin vezzosa in vesta di sposa” (I’m a pretty maiden, in bridal dress), a light number that could have been imported from a bel canto comedy. But, again, her inability to make the role her own could be the result of singing a new role for the first time on opening night in a new production.

It might be instructive to come back at the end of the run to see if Coburn and Tessier have relaxed into their roles, become comfortable with each other and given themselves over to the irrationality the opera requires. Because if you’re not pulled into the madness of the art, almost surreal in its repudiation of rationality, you’re then forced to look at the work as a word-based drama, and you’re confronted with its inadequacies. And that would break Bellini’s heart.

A final word about the ending: According to the text, there is general rejoicing when it is announced that the Stuarts have surrendered and Cromwell has offered amnesty to their supporters. Elvira and Arturo embrace and in the final chorus everyone sings, “Ah! voluttà.” (Ah, happiness.) At that moment, stage director Crystal Manich has Riccardo step out of the crowd and stab Arturo in the back as the lights fade and the opera ends. Well, I was astonished, and I’ll bet that some who know the score well were outraged, although there were no calls for Manich’s head when she came on stage at the end of the performance. The thing is that it sort of makes better sense for Arturo to be assassinated, even though Bellini and his librettist didn’t intend him to be. The “happy” ending they wrote is one of the most irrational elements of a generally irrational drama. By witnessing her lover killed, Elvira is returned to a world of madness. As she deals with Arturo’s death, one can only imagine the mad scene she will sing. Too bad Bellini is not still alive to give her the melody.