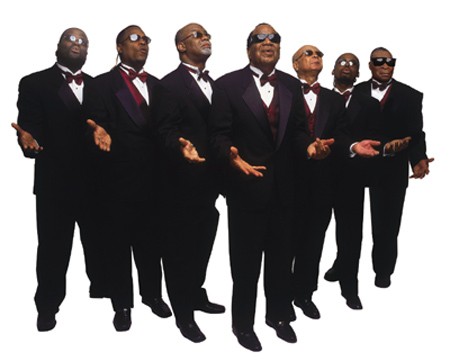 The Blind Boys of Alabama return to lower Cape Cod on May 25.

WELLFLEET -- Kick off the summer season with the soulful Grammy winning sounds of THE BLIND BOYS OF ALABAMA. After their sold out show at Town Hall in Provincetown last March, PAYOMET PERFORMING ARTS CENTER brings the legendary performers back to a more intimate setting. Artistic Director, Kevin Rice, beside himself, claims the BLIND BOYS as a “gospel institution destine to make you jump from your seat with a smile and clapping hands.” The sultry soul and R&B sounds will hit the stage on Saturday, May 25th at 8:00pm at the WELLFLEET CONGREGATIONAL CHURCH. Stay tuned for more of PAYOMET PERFORMING ARTS CENTER’s stellar season presenting national acts such as; Ben Taylor (June 23); The Wailers (June 28); The Holmes Brothers (July 6); Ruthie Foster (July 27); and much more!

ABOUT BLIND BOYS OF ALABAMA

The Blind Boys of Alabama are recognized worldwide as living legends of gospel music. Celebrated by The Grammy Awards and The National Endowment for the Arts with Lifetime Achievement Awards, inducted into the Gospel Music Hall of Fame, honored by performing for three presidents in the White House, and winners of five Grammy Awards, they have attained the highest levels of achievement in a career that spans over 70 years and shows no signs of diminishing. This fact is more than evidenced by the group's latest album, the country-inspired Take the High Road (2011). Longevity and major awards aside, The Blind Boys have earned praise for their remarkable interpretations of everything from traditional gospel favorites to contemporary spiritual material by acclaimed songwriters such as Curtis Mayfield, Ben Harper, Eric Clapton, Prince, and Tom Waits. Their performances have been experienced by millions on The Tonight Show, the Late Show with David Letterman, the Grammy Awards telecast, 60 Minutes, and on their own holiday PBS Special. The group's live shows are roof-raising musical events that appeal to audiences of all cultures, as evidenced by an international itinerary that has taken them to virtually every continent.

“They proclaim their reverence in close harmonies and gutsy improvisations that leap heavenward.” — The New York Times

"Seeing the Blind Boys of Alabama in concert is part living history, part concert, all uplifting experience... " — The Washington Post

Payomet Performing Arts Center presents professional music, theatre and film screenings that bring a mix of exciting entertainment and strong social values to various Cape venues throughout the year and in the summer to its tent in North Truro.