The Seagull at Main Street Stage 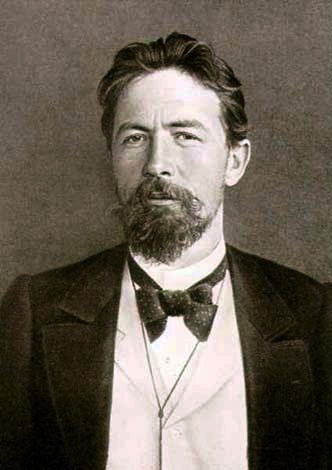 Anton Chekov endures through four great plays including The Seagull. 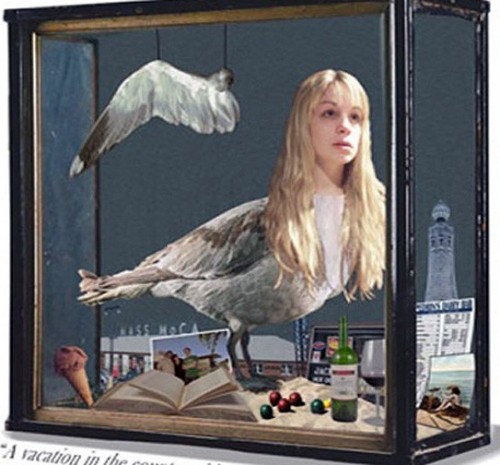 Leandra Sharron in every sense conveys the slaughtered and embalmed Seagull. 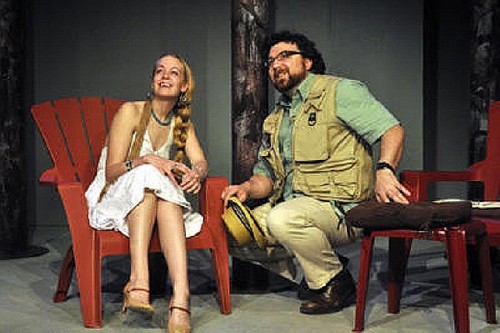 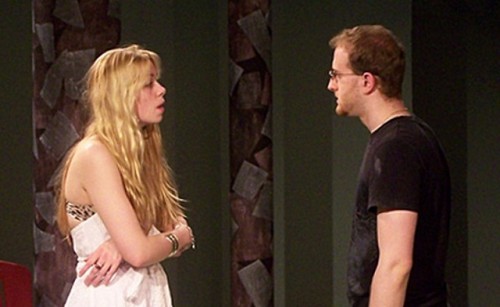 Leandra Sharron as Nina and Jed Krivisky as Konstantine in The Seagull at Main Street Stage. 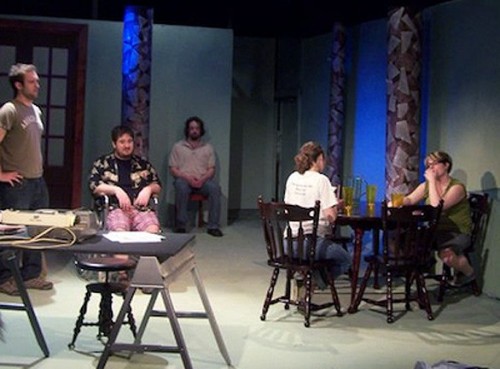 A bare pipe setting for Main Street Stage’s The Seagull.

Yet again we ponder the notion of The Seagull, A Comedy, by Anton Chekhov.

If the dichotomy of theatre is separated by the polarities of tragedy and comedy where then to situate the four great plays of Chekhov (9 January 1860 – 15 July 1904)? He wrote more plays than The Seagull, Uncle Vanya, The Cherry Orchard, and Three Sisters, but the others are rarely produced.

Of course the notion of comedy is largely up to the director and actors. It depends upon the production and where the accent falls. The elements are there but are deeply complex requiring great skill and nuance to bring to the surface and weave together the cameo characters, their personalities and agendas that conflate ever resonating subplots.

The designation comedy needs modification. The term irony might be better. Chekhov should never be played for laughs but there are absurd statements and incidents that are amusing and beyond. A production may be hilarious or tediously enervating. It all depends. Chekhov can be lively and witty or just dull and deadly.

To quote Bette Davis “Fasten your seat belts. It's going to be a bumpy night!”

For a community theatre group such as the twelve year old Main Street Stage it is attractive and ambitious to take on Chekhov. As written, all of the roles, including the minor ones, are nuggets to be mined for their gravitas, levity, irony and heavy metal. It sets the bar high for an amateur, non equity company. There is the inevitable disparity of skill and experience. Most devastatingly obvious in the ensemble elements where it takes a village to keep the plot afloat.

Predictably, that’s when this production founders. There tends to be more cacophony then chemistry. Particularly when the action swirls around the histrionic, archly theatrical  Irina (Barby Cardillo) who is played here, loud and shrill. The script conveys that she is a successful diva now past her prime with the skills and vanity to orchestrate the dysfunctional ensemble that swirls about her. In this case, most unfortunately. We never for a moment believed or trusted her performance. It takes a great actor to convey an actor acting badly.

There is more farce than comedy when, standing next to the stunning young Nina, she asks the observer to choose who is the better suited to perform a fifteen year old. Oh my. I found myself laughing at not with Cardillo. A more gifted performer would at least give us pause.

Since Irina is so essential to the play every scene with Cardillo threatened to sabotage the performances of the other players.

The challenge of such an evening is to look beyond the rough edges of a bare pipe set with props and cheap furniture, the at times hideous thrift shop costumes, cacophonous pratfalls of ersatz comedy, to find diamonds in the rough. Indeed like panning for gold we find here brilliant, glimmerings gems of performance and talent. Of which there were hearteningly enough to confidently recommend to friends and neighbors, with caveats, that this is an enjoyable and rewarding evening of theatre.

After enduring the first half of the evening, three acts combined into one, followed by intermission, we were rewarded with the final, fourth act. It was simply sublime for its passion, insight, and poetry. For that all too brief passage of time you lost sense of being in a theatre and became truly, wonderfully involved with the superb performances of the failed, would be playwright and author, Konstantine (Jed Krivisky), and the now beaten and world weary actress and former ingénue Nina (Leandra Sharron).

We are truly devastated and heart broken when the brutalized former free spirit Nina tells us that she is “The Seagull.” As she wavers on the edge of sanity it is a metaphor for the bird that the frustrated Konstantine randomly shot and dragged home. It was a reaction to having his symbolist, one act play, performed in a long soliloquy by his then love Nina, utterly ridiculed and destroyed. With the cruelest blows inflicted by his gratingly hysteric, manic mother Irina.

In more skilled hands we might believe the self absorbed Irina so threatened by her lover's interest in the young Nina that she undermines, with theatrical pique and nuance, the performance of the aspiring younger woman. That, as a matter of collateral damage, she ridicules and destroys the poetic efforts of her insecure son is a matter of no concern to her. Performed properly we might see the humor in her transparent motives.

What endures and fascinates about Chekhov are the musings about the nature of art and the frustrations of creativity. He skewers the polarity between the populist, successful and vulgar- Irina and her lover the hack writer Robert Trigorin (David Lane)- or the fragile, failed, experimental, avant-garde, Konstantine, and the innocent, sensitive aspiring actress Nina. The actors tells us a lot about their craft.

As Trigorin David Lane had many wonderful moments. He played the character as understated, inward, musing and numbingly ordinary as an artist. Although successful as a writer we see him more as an observer than creator. Listening to what others say he is constantly writing down lines in a notebook. These elements are combined to concoct the kind of populist literature in which vulgarians find themselves through ersatz insight.

If Trigorin is weak and something of a worm he is also successful and rich enough to attract the attention of the fading Irina. In her prime  she was the arm candy of a successful writer. But he is barely man enough to be driven by lust to snatch then crush the blossom of Nina’s stunning youth and beauty. In using and then discarding her Trigorin destroys not only Nina but Konsantine who loved her.

What is murdered and lost in this Chekhov tragic comedy is not just The Seagull but his idealism and aspirations for art. The playwright, who died in 1904, did not live to see the turmoil of World War I and the consequences of the October Revolution of 1917. But, as in Dostoyevsky, one finds in the writing references to the decline of the old order, the last gasps of the Ancien Regime. This is conveyed by Irina and Trigorin in all their corrupt values. The craving and sputtering hopes of revolution with its resultant new, idealistic, proletarian art are embodied by the vulnerable and striving Konstantine and Nina.

Much that Chekhov implies in The Seagull and his other plays did indeed transpire with the Revolution. The old order and decadence were utterly destroyed. For an all too brief moment there was the avant-garde, symbolist, revolutionary art that Konstantine strove for. After Lenin died in 1924 Russian art and culture were denounced by Stalin and repressed as bourgeois and counter revolutionary. Russian art and culture flourished from 1917 to 1924 as one of the most unique and creative niches of the modern era. After that it was beaten back by the agit-prop of rigidly reactionary conservatism. What a tragedy.

It is all there in Chekhov and Dostoyevsky. Read them and weep.

But most people don’t. Like one of Trigorin’s successful populist novels the director Frank La Frazia has opted to update and relocate The Seagull from a lake village and summer resort in Russia to the Berkshires. There are a number of amusing local references. Those provide the few actual laughs in this comedy. But it is a cheap trick that conveys a lack of confidence in the intellectual acumen of the audience.

Of course updating and relocating classic drama is nothing new in theatre. Consider Romeo and Juliet transformed into West Side Story. When it works it can be quite wonderful. But here La Frazia just goes for the down and dirty, quick and easy.

Like turning the minor character Masha, in a throw away performance by Wendy Walraven, into a crack head. Oh please. We grew annoyed to the point of screaming to see her constantly starting her every scene tooting blow. A coke head in Old Russia?

Or consider the consumptive cough of Irina’s invalid brother Peter Nicholson (Eric K. Auld). His often ill timed hacking managed to undermine one too many scene. That said Auld is a compelling actor in this case placed at too great a disadvantage by the role and its direction. He never got his teeth into the character.

Few if any of the peripheral characters managed to work their way into our psyche. Sam, the caretaker (Ross Jacobs), was just too bellowing and overplayed.  He is meant to be loud and obnoxious but here there were no restraints. What was the British accent of Dr. Eugene Dorn (Jack Sleigh) doing in the Berkshires? Particularly in a home grown production striving so hard not to sound high brow and British. Paulina (Kelli Newby) indeed what was that all about? As played, the scene when she snatches the bouquet from Nina and destroys it, just doesn’t makes sense. We never grasp the motivation.

One might go on but bottom line this is community theatre. We  expect it to be wildly uneven. But even in an amateur production there are pleasant surprises. The lighting by Jeff Roudabush, on staff at Barrington Stage, was superb. As was the sound design of Michael Trainor. I liked the crickets by the lake. They seemed so, well Berkshires. There was a daring and effective moment of projection design during the fourth act by David Sernick. It provided a poetic backflash to the now lost maidenhood of Nina.

Good, bad and indifferent we must support and sustain community theatre such as Main Street Stage. This is their last production at the current location. They have already targeted a new home and hope to remain in North Adams. In order to do this the company must raise $100,000. We spoke briefly with Board President Ed Sederbaum. “So far we have $10,000 and I have only been at it for a week.”

Larry Murray in Berkshire on Stage