Notes on a Play in Progress 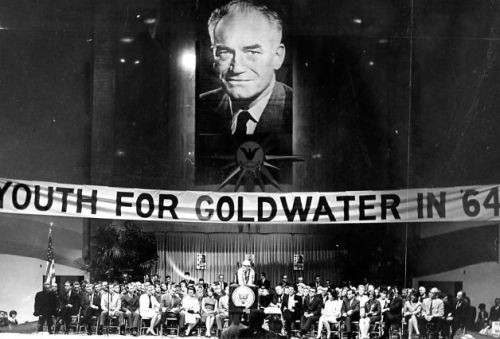 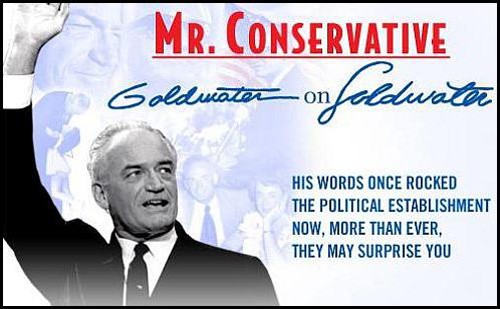 Turning America to the right. 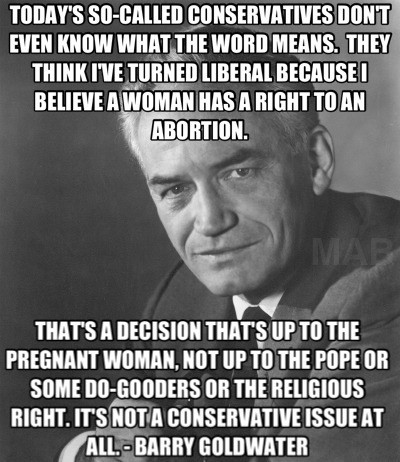 Something to think about.

Several years ago I began to write a play about Senator Barry Goldwater (1909-1998), who ran for President against Lyndon Johnson in 1964. Conceived as a one-man show full of roiling politics and (to my way of thinking at least) insights into the way elections have become a p.r. and advertising game.

In its more radical moments it’s a story about a hell-broth of crazed Christians, white supremacists and corporate moguls who are trying to bring down America. John Birchers back in 1964 and Tea Partiers today have their say, but after some second thoughts I put it away because it’s just too over the top. It began as a colorful dissertation on national priorities as Jefferson and our founding fathers might have practiced. But as it evolved to reflect newly discovered words and memes of the constantly evolving Goldwater, the wilder it got. Republicans have actually tried to take his name off of Federal Buildings, airports and schools since they have regressed even as he and a majority of the nation progressed. His reaction to that change of heart has the makings of great drama.

I recently began thinking about dusting off that script – which is both personal and polemical since I voted for Goldwater back in my youth – but still it lies mostly unfinished in my computer and in my head, a collection of short sketches and drafts. The motivation came rushing back when a five year old video of a Hindu cleric being rudely heckled in the US Senate resurfaced. All he was doing was trying to deliver the Senate’s daily invocation. It is an honor that is nondenominational in America’s pluralistic Congress. If you haven’t seen the video it is here.

Goldwater is rarely mentioned by Republicans today, because like Dwight D. Eisenhower, their practicality are out of fashion. Eisenhower spoke truth to corporate power when he warned of the corrosive influence of the military-industrial complex. Goldwater warned of the dangers of letting religion into the election game. Neither view is welcomed in today’s warped politics.

Take this hard hitting speech Goldwater made while in the Senate: “On religious issues there can be little or no compromise,”  the Congressional Record reports. “There is no position on which people are so immovable as their religious beliefs. There is no more powerful ally one can claim in a debate than Jesus Christ, or God, or Allah, or whatever one calls this supreme being. But like any powerful weapon, the use of God’s name on one’s behalf should be used sparingly. The religious factions that are growing throughout our land are not using their religious clout with wisdom. They are trying to force government leaders into following their position 100 percent. If you disagree with these religious groups on a particular moral issue, they complain, they threaten you with a loss of money or votes or both.

“I’m frankly sick and tired of the political preachers across this country telling me as a citizen that if I want to be a moral person, I must believe in “A,” “B,” “C” and “D.” Just who do they think they are? And from where do they presume to claim the right to dictate their moral beliefs to me?

“And I am even more angry as a legislator who must endure the threats of every religious group who thinks it has some God-granted right to control my vote on every roll call in the Senate. I am warning them today: I will fight them every step of the way if they try to dictate their moral convictions to all Americans in the name of ‘conservatism.’”

Think of a senator winning the Democratic nomination in the year 2000 whose positions included halving the military budget, socializing the medical system, re-regulating the communications and electrical industries, establishing a guaranteed minimum income for all Americans, and equalizing funding for all schools regardless of property valuations.” – Rick Perlstein in Before the Storm: Barry Goldwater and the Unmaking of the American Consensus (2001)

The second thing that is immensely surprising is how pro-science and technology Goldwater was, while so many Christians today proudly assert that they do not believe in global warming, evolution or that the earth is more than 6,000 years old.

In his book, With No Apologies, he wrote: “My faith in the future rests squarely on the belief that man, if he doesn’t first destroy himself, will find new answers in the universe, new technologies, new disciplines, which will contribute to a vastly different and better world in the twenty-first century. Recalling what has happened in my short lifetime in the fields of communication and transportation and the life sciences, I marvel at the pessimists who tell us that we have reached the end of our productive capacity, who project a future of primarily dividing up what we now have and making do with less. To my mind the single essential element on which all discoveries will be dependent is human freedom.”

Goldwater was a statesman who tended to be “understated”. During his long career, Goldwater was portrayed as a war monger and even a lunatic, while his true greatness was overlooked and diminished by those that opposed him. He also evolved after his Presidential campaign, even coming to support gays in the military when it was still a very unpopular notion.

In a 1994 Washinton Post interview he said: “Having spent 37 years of my life in the military as a reservist, and never having met a gay in all of that time, and never having even talked about it in all those years, I just thought, why the hell shouldn’t they serve? They’re American citizens. As long as they’re not doing things that are harmful to anyone else… So I came out for it.

“I have one grandson who’s gay. And my brother {Bob Goldwater} has a granddaughter who is gay. We’re sort of at a loss to know what the hell it’s all about.

Goldwater causes people to focus on the real issue: Should the country that celebrates life, liberty and the pursuit of happiness allow discrimination for a group of Americans based on sexual preference. It’s that simple.

This is great anecdotal fodder for a fascinating play that can focus on the Goldwater family in Arizona and yet go wide with name-dropping tales that combine history with reality. Goldwater likes to remind McCain, a Vietnam-era Navy pilot who spent 5 ½ years in the “Hanoi Hilton,” that if he’d been elected president in 1964, “you wouldn’t have spent all those years in a Vietnamese prison camp.” McCain’s reply: “You’re right, Barry. It would have been a Chinese prison camp.”

I may continue my reading and searching into the complex Goldwater once the coming season has passed. After all, who can resist a Republican with libertarian leanings who says things like: “When you say ‘radical right’ today, I think of these moneymaking ventures by fellows like Pat Robertson and others who are trying to take the Republican Party away from the Republican Party, and make a religious organization out of it. If that ever happens, kiss politics goodbye.”

Reposted courtesy of Berkshire on Stage and Screen by Larry Murray.