Dry as Dust in San Diego 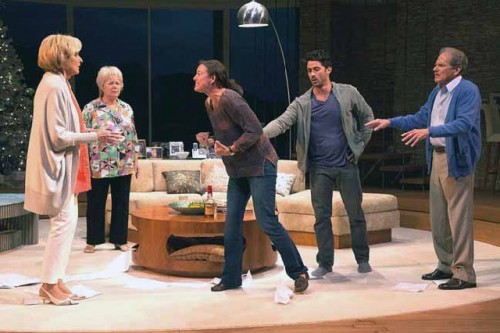 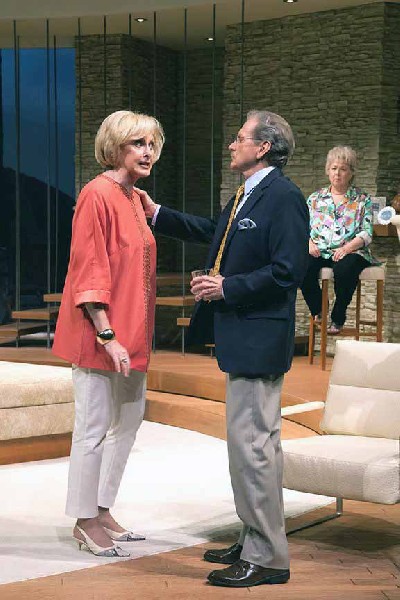 The play in the first act of “Other Desert Cities” at the Old Globe Theatre in San Diego, is chock-full of dialogue that sounds like a TV half-hour sitcom series.  The play written by Jon Robin Baitz didn’t get any snappier or the story didn’t get anymore incisive since I saw it at LA’s Mark Taper Forum in 2012.  It’s apparently stuck in first gear wherever it’s produced. The Old Globe production is currently performing on the Donald and Darlene Shiley main stage through June 2nd, with their version.

Playwright Baitz was one of young and emerging playwrights with a promising future.  In his early work (he’s now fifty-one) he displayed a talent for drama, but his constructions were a little shaky.  He was labeled early on as playwright who wrote two one act plays in search of a full two-act play.

Despite the solid direction of Richard Seer, “Other Desert Cities” for me, however, still suffers from the two one acts morphing into a single, cohesive, two act play format.  The play’s title refers to a sign on the eastbound Interstate 10 in Southern California, which indicates to those folks driving to Palm Springs – take the next exit.  All others stay on the “I-10” heading east to “Other Desert Cities”.

The play’s story swirls around a Christmas Holiday, when the Wyeth family, Polly and Lyman Wyeth (solidly played by Kandis Chappell and Robert Foxworth, respectively) gather in their Palm Springs home.  Their daughter Brooke (nicely, though stridently at times; played by Dana Green) returns home after six years of living in New York City, with a secret to share with the family.  Brooke announces that she is about to publish a memoir dredging up a pivotal and tragic event in the family’s history – a wound that Polly and Lyman don’t want to publicly revisit – the suicide of their oldest son Henry.   Henry had been involved with radical underground movements and in one violent incident people had been killed.

Polly’s sister Silda Grauman (wonderfully played by Robin Pearson Rose) is also visiting; fresh from a stint in rehab and loaded with liberal zingers to toss at her sister and brother-in-law.  Also home for the Holidays with mom and dad is their television producer son Trip Wyeth (Andy Bean).

Polly and Lyman are retired Hollywood professionals.  He was an actor who worked with Ronald Reagan, and Polly was a screenwriter along with sister Silda.  The Wyeths are solid Red State Republicans.  Silda, however, never lets them forget that she is a Blue State liberal. When “Ronnie” (as Lyman calls him) became President, Lyman became a U.S. ambassador, and joined the ranks of Hollywood political heavyweights.

Act One plays like a TV-styled sitcom series with moments and narrative exposition we’re used to seeing in a sitcom series format. The only thing missing is the laugh track.  But a laugh track isn’t necessary.  The boisterous, opening night audience more than made up for the lack of one.

In Act Two, however, the tone changes and the actors shift gears into “drama” mode as the story becomes more serious and moves into the territory that Baitz knows best – family dramas with biting and sarcastic commentary. At one point a glib Polly says to Brooke concerning her constant sarcastic remarks, ”sarcasm is for teenagers and homosexuals Brooke”.  What a put down from a mother to her grown daughter.  But the audience just roars, lapping up every exchange about politics and the rich/poor divide.
Chappell was born to play Polly. She brings her years of playing sophisticated women on stage, making Polly a fascinating creature to watch as she devours any challenge to her authority. As they say in the fight game… now shake hands and come out fighting!

The talented ensemble cast is uniformly fine and render their roles with flair and relish.  It’s that darn story that falls short in delivering a payoff to the audience or at least there isn’t one for me.  The creative team headed by the immensely talented director Richard Seer, presents first-rate technical support.  I’ve always maintained that the Old Globe has few equals when it comes to the technical areas.  Scenic Designer Alexander Dodge, renders a stunning on stage recreation of a luxurious, but functional, home in Palm Springs.  The lighting design by York Kennedy, paints the stage in just the right amount of light to appreciate the costumes of Charlotte Devaux.  The entire production has a sophisticated and slick quality to it.

“Other Desert Cities” performs on the Donald and Darlene Shiley stage through June 2, 2013.