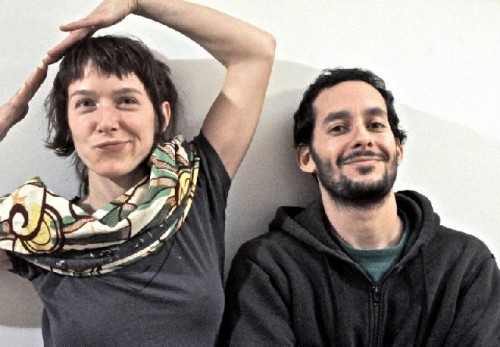 On Saturday, July 16, at 8 PM Buke and Gass will bring their unique blend of hybrid instrumentation, solid songwriting, dazzling effects and unique harmony to MASS MoCA's Courtyard Cafe. Arone Dyer and Aron Sanchez have figured out how to use the human body to its highest musical potential: using every limb they project the sound of a full, well-rounded ensemble. Where does the name Buke and Gass come from?  It refers to the primary instruments they play, which are just a fraction of each member's elaborate performing technique.

Arone Dyer performs on the Buke, a larger six-stringed baritone version of the more typical four-string ukulele. Adding a pickup to the sound hole lets Dyer connect this already acoustically unique instrument to a myriad of  electronics which shape the pitch and other qualities of the sound. While these effects are manipulated with her right foot, she slams on a tambourine (a.k.a. "toe-bourine") connected to her left foot, adding a merry jingle to the duo's percussion. Originally a guitarist, Dyer invented the Buke to relieve her carpal tunnel syndrome.

Aron Sanchez performs on the Gass, a makeshift hybrid instrument which connects guitar and bass strings constructed from the metal of a 1960s Volvo. The sound from the gass, which covers a broad range of pitch, runs through effects which manipulate the sound even further. The New York Times says the effects "further blur[. . .} the identity of their instruments, giving a crazy zero-gravity feeling to your hearing."  Sanchez controls the gass sounds continuously with his left foot while his right foot lays down the beat on a bass drum with tambourines connected at the front. Regarding their complex performance style, Sanchez claims, "We're trying to solve a problem: The problem of the limitations of what two people can do."

These MacGyvers of instrument innovation produce sound with both acoustic and electronic elements by capturing the sound produced acoustically and simultaneously playing with signals transferred through electrical connections. With all limbs in motion, it can be hard to figure out what element to focus on. The New York Times explains:"The vocal melodies, low-end riffs, strumming and grooves all moved in direct lines, hustling toward the end of the tunes".

Buke and Gass's sound recalls progressive rock and folk in a musical sense while exuding a punk edge with the homespun, "do it yourself" approach with their setup, as well as spastic, in-your-face bursts of energy. Their debut recording, Riposte, which was praised by NPR as one of the top 50 records of 2010, is a collection of 14 songs which change from joyful to schizophrenic in a matter of seconds. In response to their ambitious debut, Pitchfork stated: "Dyer and Sanchez are the sort of artists who will continue to challenge themselves at every turn. As long as they can keep that boundless creativity from going in a million different directions at once, their listeners will reap plenty of rewards."

As part of the Alt Cabaret series, Buke and Gass is supported in part by the Hans & Kate Morris Fund for New Music.

The performance on July 16 starts at 8 PM as part of MASS MoCA's Alt Cabaret series presented in the intimate Courtyard Café (or indoors in Club B-10 if rain threatens), that spotlights rising stars in music, theater, comedy and other disciplines.  Drinks from the MASS MoCA bar, as well as dinner and snacks from Lickety Split, are available before and during all shows.  Tickets for Buke and Gass are $14 in advance and $18 day of show. MASS MoCA members receive a 10% discount. Tickets are available through the MASS MoCA Box Office located off Marshall Street in North Adams, open from 11 A.M.  to 5 P.M. (closed Tuesdays). Tickets can also be charged by phone by calling 413.662.2111 during Box Office hours or purchased on line at www.massmoca.org.