On The Town Brilliant At Lyric Stage

As Good As It Gets Of Classic Revival 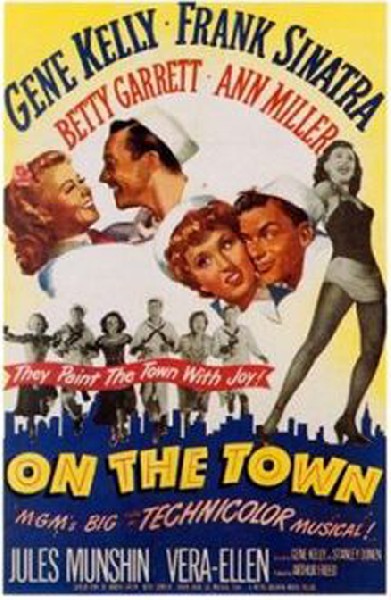 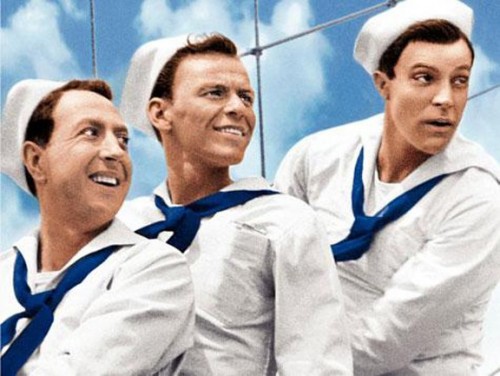 Jules Munshen, Frank Sinatra and Gene Kelly in 1949 Film On The Town 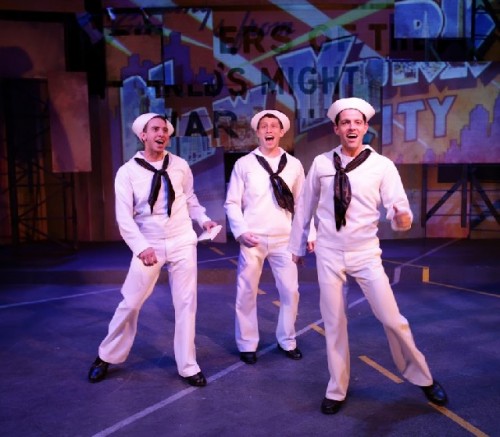 Phil Tayler, Zachary Eisenstat, John Ambrosino in Lyric Stage's On The Town. All of the following photos are by Mark S. Howard. 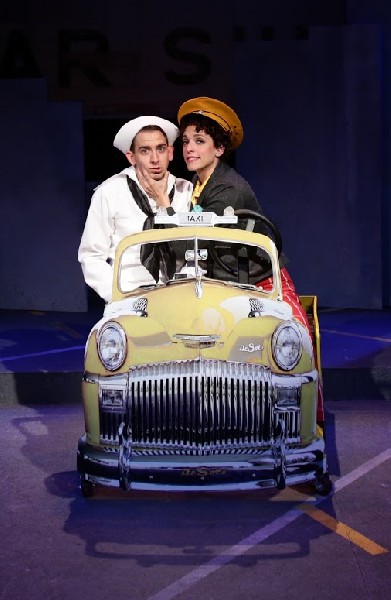 Phil Tayler and Michele A. DeLuca 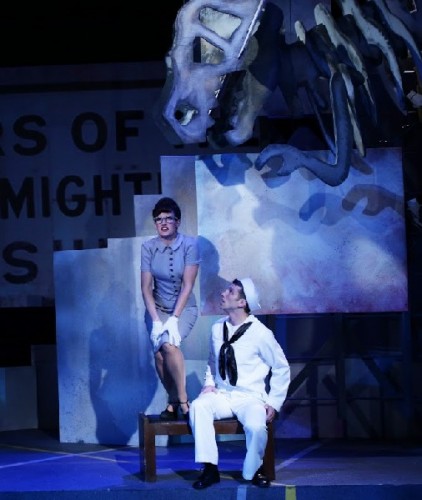 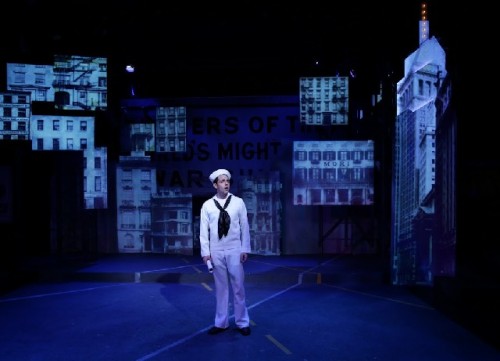 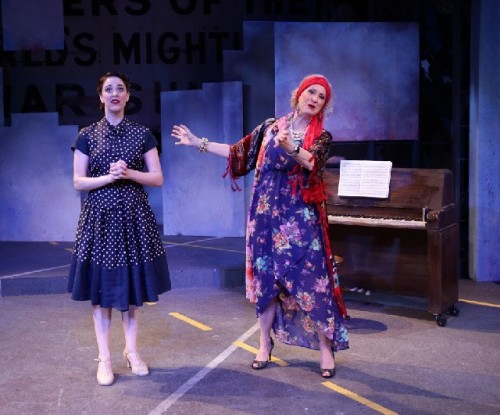 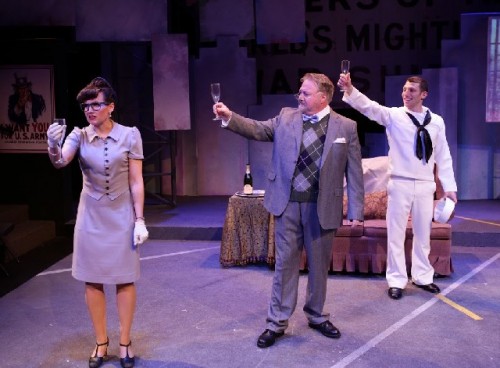 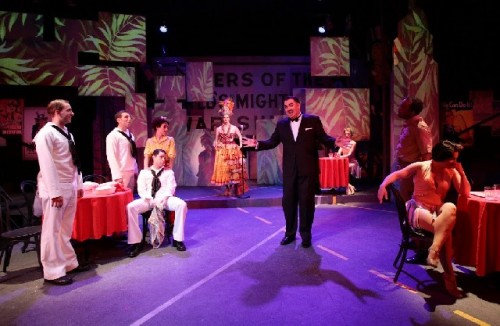 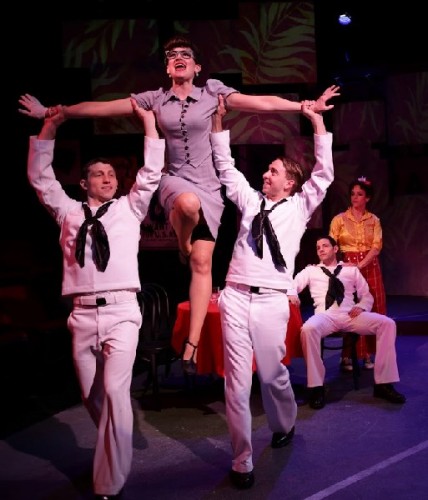 In a golden age of Boston Theatre, On The Town at the Lyric Stage Company is one of the shiniest examples. Yes, it is a revival of a great collaboration between Leonard Bernstein and Comden & Greene, but what has been done with it at the Lyric is rather miraculous.

Director Spiro Veloudos has used inspired genius to orchestrate narrative, singing and dancing in such a way as to give a contemorary air to a nearly 70 year old storyline. Using a small stage environment, the show overflows into the audience and our imaginations. This is musical theatre as it should be at its literal best.

I could keep on gushing about this productions, but I am running out of superlatives. This is a not to missed show.

The storyline is a straightforward feel good comedy of errors and happenings set at the end of WWII during  a one day leave of three sailors in New York City. Each has his own personality.

Previously, one had saved the two others from drowning. So when he goes on a seemingly ridiculous quest to find Miss Subway in a huge New York City, a beautiful girl that he sees on a transit poster, the other two agree to help. The story tumbles on from there.

John Ambrosino (Gabey), Phil Tayler (Chip) and Zachary Eisenstat (Ozzie) are the three sailors on leave. John Ambrosino's Gabey is the most romantic one searching for a girl on a poster with real or imagined traits.

Chip is literally picked up by a sassy, brassy taxi driver, Hildy, played with fiesty 1940s moxie by Michele A. DeLuca. And Zach's Ozzie runs into a delicious anthropoligist at the Natural History Museum, Claire played with an under the surface red heat cloaked in cool intellectual sophistication by Aimee Doherty. She also has a great voice. All the actors are wonderful. Each can sing, dance and trade lines and quips fabulously.

It is easy to see why Gabey is infactuated with Ivy (Miss Subway), even though he really does not know her. Lauren Gemelli beautifully plays Ivy. Not only is she lovely to look at, a brilliant dancer, but she is a believable overwrought heroine. But the real twist in the story is that her character is not as she is described on the Miss Subway poster.

The entire talented 21 member ensemble cast is flawless. This is a dancing/singing entertainment with few equals. Many in the cast play several roles and each is well portrayed and significant to the story.

Direction by Spiro Veloudos is elegantly seamless and brilliantly flaired. His re-imagining of the show is simply dazzling. This is threaded skillfully with Ilyse Robbins' stellar choreography and musical staging. The orchestra is terrific under Jonathan Goldberg's musical direction.

The retro-40s sets and costumes add to the visual impact of the wonderful staging. The artistic touch of Janie E. Howland's scenic design is colorfully and authentically embraced by the WWII era costumes of Kathleen Doyle.

Scott Clyve's lighting design puts focus and crispness on the production. Added to the scenic quality are exquisite projections by Seaghan McKay. They reinforce both emotionally and historically our visual memory of the War decade. These vital images are a character themselves in On The Town that underscore the scale and structures of our largest metropolis at a particular and poignant time.

Being effusive about this On The Town production would just be an understatement. This is undeniably one of the best shows in Boston in the last few years. It could go to Broadway as a major revival the way it is. If you don't see it, you will regret this missed rare enthralling entertainment opportunity. Bravo Lyric Stage Company, bravo Spiro Veloudos and three cheers for the spectacular On The Town cast and crew.